How to Catch Winter Spotted Bass 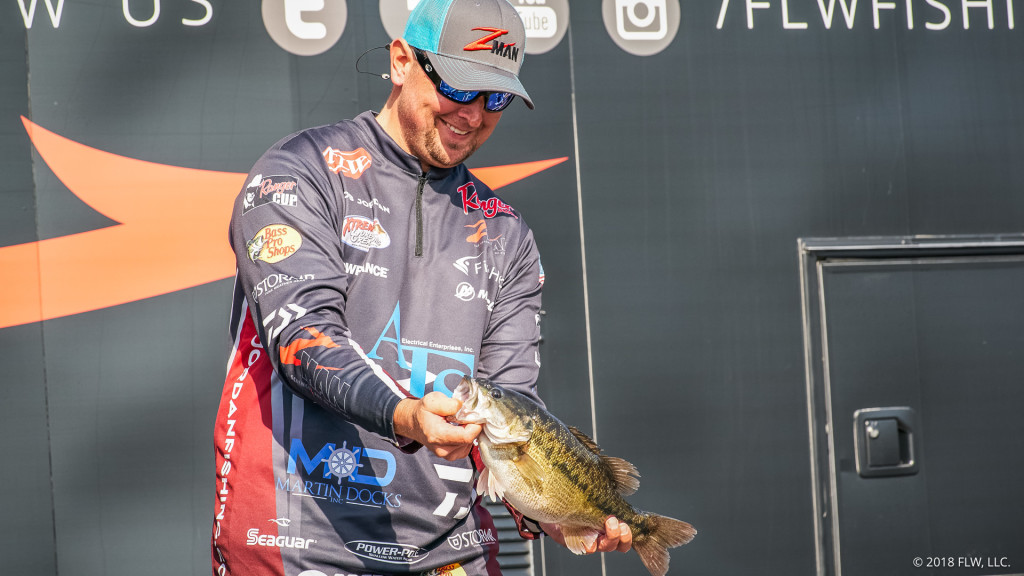 Some of the best fishing of the year in the South occurs on the reservoirs with spotted bass in Georgia and the Carolinas. As a guide on Lake Lanier, Rob Jordan is adept at staying on the spots all winter. He knows when to fish deep or go shallow, and how to apply a jigging spoon, jig, underspin and crankbait to take full advantage of the opportunities.

“There are three really predominant patterns in the wintertime,” says Jordan. “They don’t all go deep. Certainly, a big population of them does spend the wintertime out there, but not always. There’s basically a shallow deal, a midrange deal and a deep deal.” 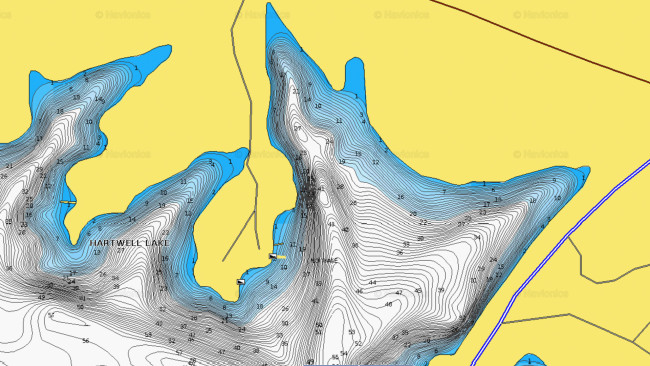 What is a ditch?

Before embarking on any wintertime fishing adventure, understanding the terminology is important. On lakes like Hartwell and Lanier, a lot of the fishing revolves around “ditches.”

“To me, a ditch just means the middle,” says Jordan. “A productive ditch can be found anywhere. Fishing in creeks is usually the best place to get started, because it’s easier to define the ditch. In the back half of the creeks you can define a lot more ditches. The rest of the year we’re focused on the points and the humps and so forth. It’s the opposite in the winter.”

Fishing ditches requires you to venture off the bank a bit more than usual, but because of the way many spotted bass reservoirs set up, you aren’t miles from the bank like you would be for truly offshore fishing.

“The water out there is stable,” explains Jordan. “They’re there because the bait is there. It can be raining or snowing or whatever, and they’re going to be comfortable.

“Productive ditches can be found on the main lake, but it’s difficult,” Jordan adds. “A lot of times, if you do find them [on the main lake], that’s where you’re going to find your biggest ones. Those fish in the main lake are typically your bigger class of fish, and they don’t migrate far for anything.” 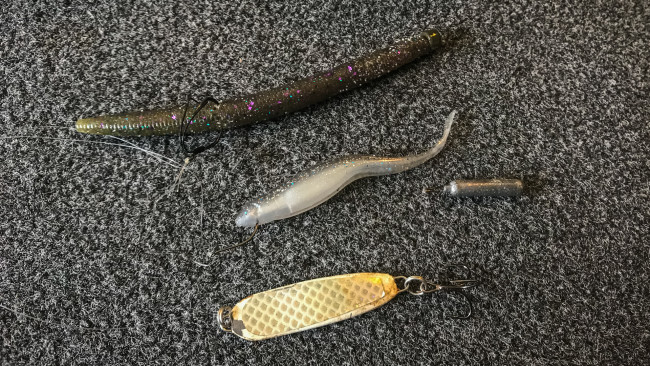 Go deep with a jigging spoon

Fishing deep in ditches and over timber is one of Jordan’s favorite ways to catch spotted bass in the winter, especially for catching numbers.

“To me it’s the most consistent way to target them,” says Jordan. “They’re out deep from now until March. It can stay productive all the way until early spring.”

Typically, the search starts with his Lowrance electronics in the middle of ditches that bottom out in 40 to 60 feet of water.

“Many times you’ll find those fish where the timber stops, and at a lake like Lanier the timber stops at about 40 feet,” says Jordan. “At other lakes the depth range where the trees stop will be different, but they’ll still gravitate to the shallow side of that timber edge.

“One thing that’s a dead giveaway is if you see bait. If you start seeing bait there’s gonna be bass around – even if you don’t mark bass. Sometimes you’ve got to fish an area for 15 or 20 minutes and see what happens when you get up on your trolling motor.”

Once he finds bass, Jordan likes to vertically jig a 1/2- or 3/4-ounce jigging spoon or back off a bit and go finesse with a light jig (3/8 ounce), a light drop-shot with a 3 3/4-inch Z-Man StreakZ, a Z-Man ZinkerZ with a nail weight or on a Ned rig.

“People associate deep water with heavy baits, but it’s sometimes the opposite,” says Jordan. “Those fish are cold, and it’s deep. You want to keep it in front of their face as long as you can. You can watch a guy fishing deep timber, and he’ll be dropping a nail-weighted Senko down 50 feet. There’ve been local tournaments won by guys throwing 3/16-ounce jigs in 50 feet of water. You don’t want it to fall right past them faster than they can get on it.

“One of those five techniques will work any given day,” he adds. “One thing is that light penetration is a big deal. I’m not saying you can’t, but it’s hard to catch them on a cloudy day. They’re down 30 or 40 feet, so they need a little light to be able to see what’s going on and track it.” 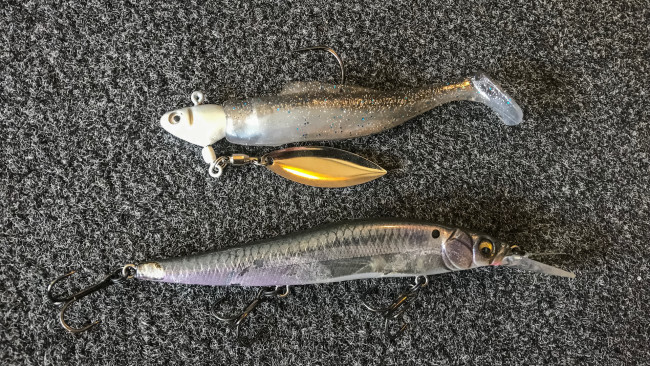 More on the middepth side of things, Jordan likes to rely on the time-honored underspin.

“You heard a lot about it when they had the Classic at Hartwell,” says Jordan. “First thing in the morning, fish will gravitate toward the back of the ditches, and on a cloudy day they’ll stay in that range all day long. You can still catch those fish on a jig and worm, but the most productive way to fish is to throw a Fish Head Spin.”

Jordan’s underspin setup is simple: a 3/8-ounce Fish Head Spin Underspin and a 4-inch Z-Man DieZel MinnowZ. As a changeup, he’ll toss either a deep jerkbait or a single swimbait on a 3/16- or 1/4-ounce head.

Typically, Jordan is targeting fish that are sitting on the bottom in around 20 feet of water. He works down the middle of a ditch and fan-casts.

“It’s good in the morning, but it’s a good alternative thing too,” explains Jordan. “If you went out last weekend and found some fish on a sunny day with a jigging spoon, you can slide up and look for some fish in the 20-foot range if it’s cloudy and they aren’t biting.  It’s also good farther up the lake. The deep timber fishing is typically in the real clean water. Those fish in the water that’s a little dirtier up the lake, or farther back in the creeks, will gravitate toward the shallower water.”

If the fish don’t want an underspin for some reason, then the swimbait is a solid option. If they’re suspended, a jerkbait fished with long pauses can catch ’em.

For the swimmy and the underspin, keeping the bait on the bottom is paramount, and using a reel with a low gear ratio helps a lot.

“The key thing is keeping it on the bottom,” says Jordan. “If you’re throwing a small swimbait or a Fish Head, you want it to be on the bottom. You need to keep it moving, but making bottom contact. It’s deadly for that midrange ditch fishing.” 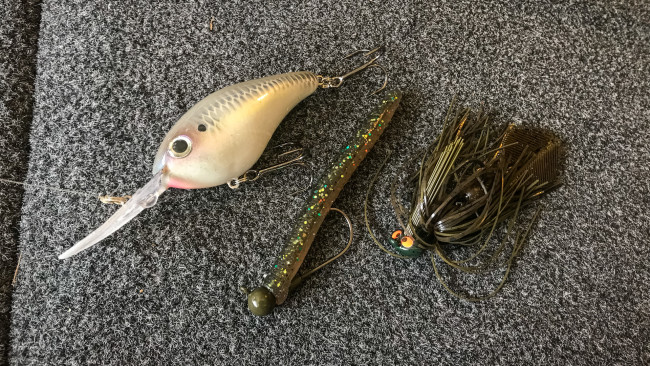 One of Jordan’s best tactics for catching big spotted bass is to throw a crankbait or a jig on rock.

“Rocks are great places to find spotted bass,” he says. “Rock points, bluff walls and things of that nature can be really good in the wintertime, not only for catching numbers, but for catching big ones. You hear a lot about spotted bass eating herring, but there’s not much tastier than a crawfish. That’s what those fish on rock are eating.”

Jordan likes to target rock that’s fairly steep and near deep water, often on points or the sides of points. Typically, he’s fishing his bait in 6 to 20 feet depending on the situation, but sometimes his boat might be in 40 feet. One wintertime tip is to fish the sunnier side of the lake. Though the water may only be a tick warmer, Jordan says it’s still worth chasing that higher temperature.

For baits, Jordan will bust out a Ned rig from time to time, but really likes to throw a jig or a crankbait. His jig of choice is a Z-Man CrosseyeZ Finesse Jig, and he’ll toss a variety of crankbaits – everything from a Rapala DT 6 to a Storm Wiggle Wart to a Strike King 6XD. He usually uses crawfish colors or red, but occasionally shad patterns, too.

Though he won’t catch nearly the numbers on rock as he does out deep, Jordan says this pattern can be a good way to win a derby or put a big fish or two in the boat. 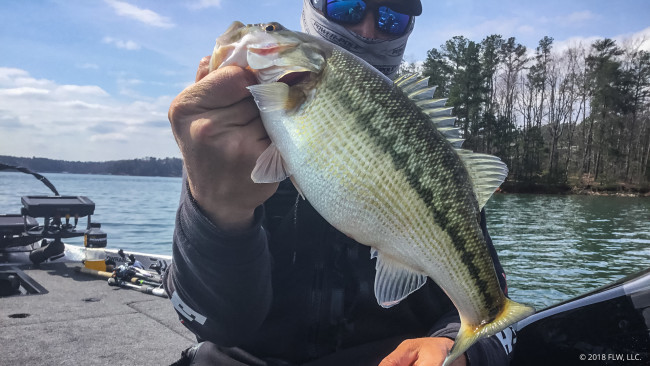 Because spotted bass are more aggressive than largemouths, fishing can be very good all winter. If you’re up to the challenge of the conditions, you can have some truly banner days and not have to mess around much with boat traffic. It’s also good training, because spotted bass only seem to be getting more predominant throughout the South, and you’re going to have to catch them in a tournament eventually.