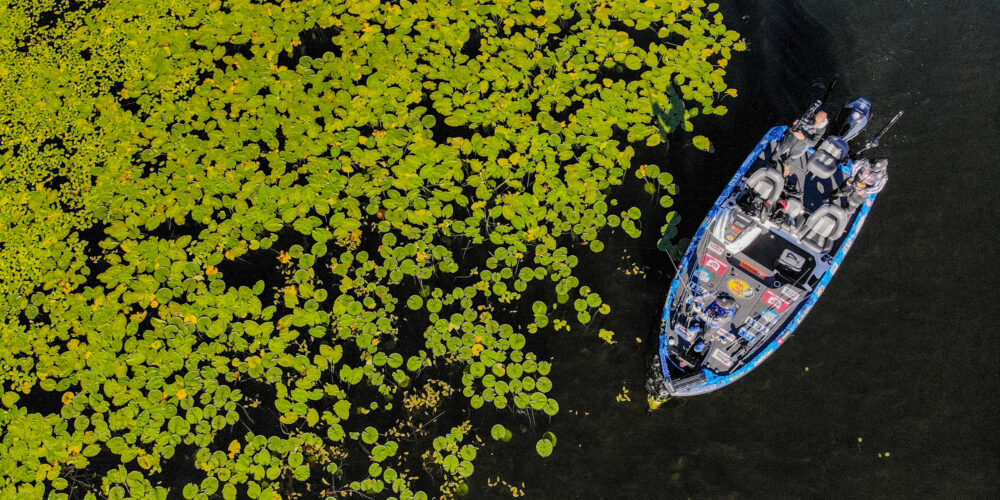 Eight MLF pros hit the waters of Turtle Lake with one goal in mind: be one of the first six to reach the qualifying weight during the 2020 General Tire World Championship Presented by Bass Pro Shops Sudden Death Round. Photo by Garrick Dixon Photo by Garrick Dixon. Angler: Takahiro Omori.
November 6, 2020 • Joe Opager • Press Releases

GRAND RAPIDS, Minn. – The Sudden Death Round of the 2020 General Tire World Championship Presented by Bass Pro Shops is set to premiere tomorrow, Saturday, November 7, at 7 a.m. ET/PT on Discovery. Shot over six days in late July in Grand Rapids, Minnesota, the General Tire World Championship showcases 16 of the top MLF pro anglers culminating the 2020 Cup season and competing for a top prize of $100,000.

Saturday’s episode will showcase the Sudden Death Round, which features the final eight anglers that advanced from the Shotgun and Elimination Rounds racing to become one of the first six to reach a qualifying weight – determined by MLF officials. The top six anglers will advance to next week’s Championship Round finale – where weights are zeroed and the highest total weight at the end of competition will be declared World Champion.

“The Sudden Death Round is the most stressful day in bass fishing, in my opinion,” said South Carolina pro Andy Montgomery. “There’s just something about knowing that cutline. Guys are getting closer, and you’re getting closer. Then, when you get really close and you need one more, you can’t catch one. It’s the hardest fish that you’ve ever caught in your life. Then, when you finally get that bite, it’s the most exciting fish you’ve ever caught in your life. It’s just so different, and so cool. I l love Sudden Death.”

“There is no downtime in Sudden Death – you have to start fast and catch them fast,” said pro Cody Meyer of Star, Idaho. “You can’t start slow or by the time you realize what’s going on it’s too late and you’re going home. Any of us that are in the Sudden Death Round can still win this thing, and I’m very excited to get back on the water.”

The 2020 General Tire World Championship Presented by Bass Pro Shops is a six-episode, two-hour series that features 16 MLF pro anglers visiting Northern Minnesota to compete on four different fisheries across the region, including Pokegama Lake, Wabana Lake, Turtle Lake, and Spider Lake. The fisheries are unknown to the anglers – they don’t learn where they’re competing until they arrive to the launch ramp each morning of competition.