Square-Bill Crankbaits: The Many

It’s not hard to understand why there has been a sudden surge in the production of shallow, square-bill crankbaits. Crankbaits like the Lucky Craft RC series have been dominating tournaments in recent years, and classic square bills like the balsa models made by Bomber have always been productive.

But suddenly there is an influx of square-bill, plastic, stump-knocking crankbaits on the market. Many, as you will notice, are quite similar in appearance. I’m sure that has raised a few eyebrows among lure designers, but the truth of the matter is that imitation is the greatest form of flattery (and profit-making) in the fishing tackle industry. And, every company puts its own spin on every product. I like that because you end up with a variety of similar lures that all fit perfectly in slightly different scenarios. 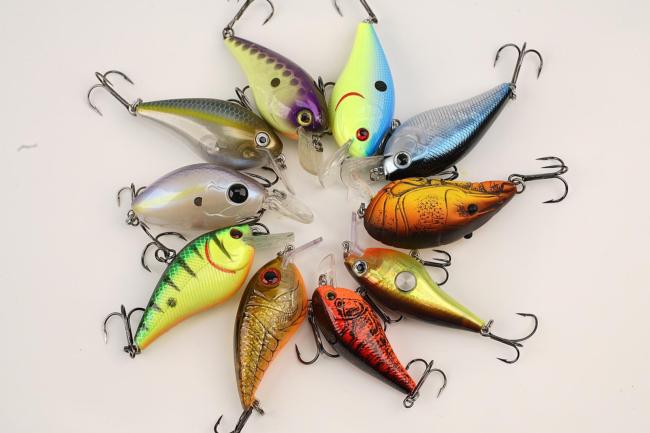 The DC-100 owes most of its recent attention to Chevy pro Bryan Thrift, who has been using it and other new Damiki crankbaits on the Walmart FLW Tour for the last few years. It climbs through wood and other shallow cover well, and I hear it hunts somewhat like a Storm Original Wiggle Wart. That has led to it seeing some use at several Ozark lakes in late winter and early spring, when a Wart traditionally shines. Damiki.com

Part of the new Rapala Clackin’ series, the Clackin’ Crank comes in two sizes: 2-inch (dives 3 feet) and 2 3/4-inch (dives 4 feet). If you haven’t heard the sound that the Clackin’ family of lures makes in the water, you need to. It’s loud, obnoxious and grabs some attention. I see this as a great lure for fishing water with the tint of chocolate milk. It combines the banging sound of a one-knocking type lipless crankbait with the shallow-cover-crawling traits of a square bill. If you find shad and schooling bass shallow around cover in dirty water, this could be the go-to lure. Rapala.com

According to the Strike King Web site, the new KVD square bills “wander” but still run true. I guess that means they have a bit of hunting action. All I know is that they’ve produced one major tournament championship and that all the folks I’ve talked to love them for their ability to be fished through cover that would be considered dense by crankbait standards. They’re also silent, so if the water clears up a bit or is still cold, you can call on them for a bit of added crankbait stealth. Strikeking.com

Lucky Craft is probably the biggest name in square-bill crankbaits thanks to its RC and BDS series. Now, the company offers the Skeet Reese signature S.K.T. series. The MR models (there are also deeper-running DR models) are similar to previous square-bill crankbaits from the company, but they have more triangular shaped bills for a slightly different wobble. The standard model is also a bit thinner than other Lucky Craft square bills. The Mini is a bit pudgier. Like all Lucky Craft crankbaits, they have fantastic finishes, premium hooks and run like the dickens through all matter of shallow cover. Luckycraft.com

First off, my favorite part about the new XCalibur XCS is that it comes in the citrus shad color pattern that Bomber (also a Pradco brand) puts on its Bill Dance version of the Fat Free Shad. Citrus shad is my favorite crankbait pattern for deeper fishing on Kentucky Lake’s

“Tennessee River green” water. Hopefully, it performs just as well in the shallows. This square bill is designed for high-speed fishing from zero to 3 feet. It comes in three sizes: 2, 2 3/4 and 3 inches. Xcaliburtackle.com

The No. 3 model of the Crankin’ Rap is 2 inches long and dives 2 to 3 feet. The No. 5 is 2 1/2 inches long and dives 4 to 5 feet. There are larger models as well, but these are the two that most closely fit the square-bill category. The Crankin’ Rap’s plastic body contains a single ball-bearing rattle that I would rate somewhere in the “in between” category in terms of volume. It’s body shape is slightly more rounded than other models in this list, more reminiscent of a traditional round-bodied crankbait like the Bomber Model A or the Rapala DT Series. For the record, the Rapala DT Series also includes the DT Fat 01 and DT Fat 03, both fabulous square-bill crankbaits. I didn’t include a full review of them here because the DT Fat crankbaits are made of balsa. Still, you should check them out as another square-bill option. Rapala.com

The MC/60 SR gained popularity in the FLW Outdoors Magazine office a couple of summers ago and again proved its worth on Kentucky Lake last year. The SR stands for shallow runner for this lure that dives about 4 feet (there’s an MR model, too, that dives 7 feet). It has somewhat of a compact body but still has an intense wobble that you can feel in the rod. It’s a great one for cranking stumps, laydowns and other snaggy cover because it gets right back on track after deflecting off the wood, rather than blowing out. It does this as well as any other crankbait on the market. Jackall-lures.com

Luck “E” Strike took the idea of a small square bill and ran with it – then shrunk it. The Rick Clunn Classic series includes three models that range in size from about 2 inches down to 1 inch. Designed by legendary pro Rick Clunn, these crankbaits have no rattles, a somewhat squared front end and a narrow tail. I haven’t had one in the water yet, but rest assured that if Clunn throws it, it works.

This crankbait has a similar body style to other square bills, but it has the unique feature of a treble hook mounted to its back. The hook is attached via a swivel, so that when it hooks a bass, the bass is less likely to twist free than when stuck by a standard hook. Having a hook on the back is said to reduce snags and increase hookups in the roof of the mouth, which is more likely to make bass stay put. The 0-4 model, obviously, dives zero to 4 feet. Backstabberlures.com