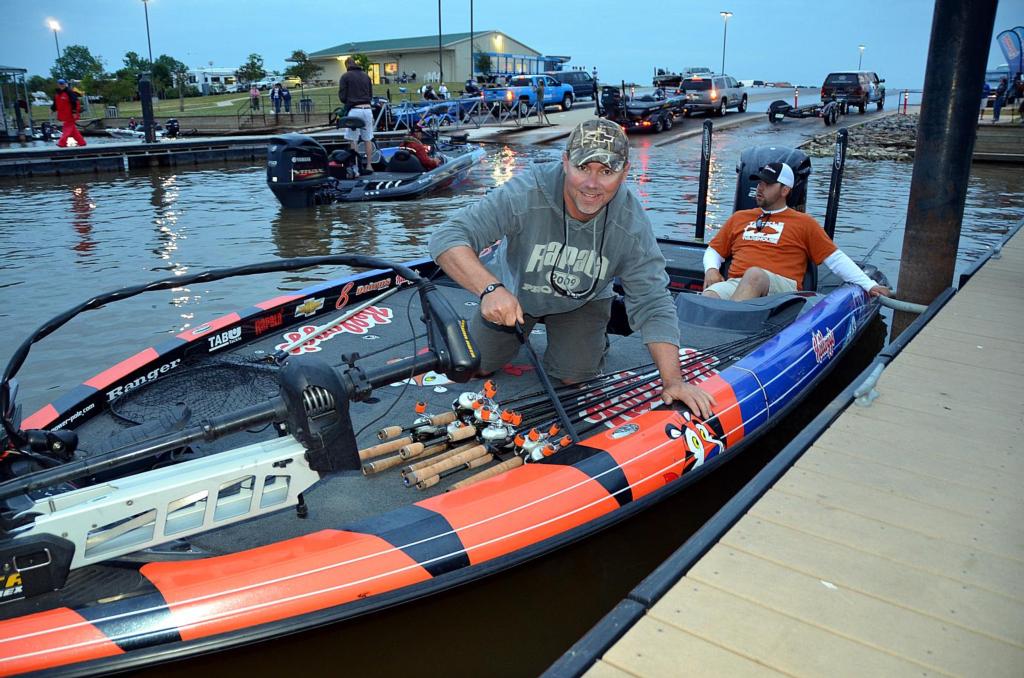 (Editor’s note: Veteran bass pro Dave Lefebre has agreed to take time to share his insights into each FLW Tour event of the 2011 season. After every event, Lefebre will give his thoughts on tournament strategy, winning techniques and other behind-the-scenes stories/information that is compelling to our readers. The following blog represents his fifth installment. Lefebre ultimately finished the Red River event in 34th place with a two-day total of 15 pounds, 10 ounces and walked away with nearly $10,000 in winnings.)

Another one down, two to go! The Red River was one of the toughest events I’ve ever been involved in and when it was all over, the Tour standings were shaken to the core. Many anglers who were in the top 15 bombed in this event, and several who were lower rocketed to the top. It will be very interesting to see what takes place over the final two FLW Tour Majors on Kentucky Lake and Pickwick.

My practice was limited due to a flu-like illness that put me down for several days. I managed to get a full day of practice in on Sunday, but that was all. I spent Monday and Tuesday in bed with a high fever. I was glad to have the day off on Wednesday to recover. And believe me, I needed it.

Practice was terrible for a lot of the field; some didn’t even get a single bite in an entire day. Most of the guys I spoke to during the week were getting between two and five bites each day. The bites were spread out over a variety of different baits, but nothing solid really emerged. There was absolutely no doubt that this was going to be one of those tough, survival mode types of tournaments.

In the rules, we were permitted to fish in pools #3, #4 and #5 for this event. My hope was to spend two days in #4 and one in #5. Well obviously that didn’t go according to plan, Alton (my practice partner) and I stayed close in pool #5 all day Sunday, so that ended up being all I knew. As a result, there would be no locking for me. The river was extremely muddy causing all the fish to concentrate in the backwater areas. But the scariest part about staying in pool #5 was that was the water was falling like a rock in this pool, over 6 inches per day. I wasn’t even sure I could get my boat into the only area we had our only bites in. Falling at a rate of approximately 6 inches per day meant that the water would be 2 feet lower on the first day of the event than it was the last time I saw it way back on Sunday.

I spent my first tournament day, still not feeling well, in a place called MacDade. It’s a large, deep and clear backwater lake with lots of trees and good looking grass. It was extremely shallow, but I didn’t have as much trouble getting into that area as I’d anticipated. This is the place Alton and I had all of our bites on our only practice day. I would say we had about 10 bites in about three hours and I set the hook on four fish that were all between 1 1/2 and 2 pounds. I really felt like it would be a guaranteed 7- or 8-pound limit if I spent the whole day in there.

Well I was wrong. I wound up weighing in only 3 fish for 3-14 and found myself in a dismal 103rd place. I lost two small keepers and a 2-pounder that got hung in a tree limb that I almost got my hand on. In a tough event like this one I knew those episodes would cost me in the end. There were only four boats in Mac Dade, which surprised me. I saw Glenn Brown, Stuart Arthur, and another anger I didn’t recognize.

On day two I knew I needed at least 10 pounds to get back up into check range (top 50). I decided to leave Mac Dade for the snakes and alligators and head to a place I found last spring when we were at the Red. That event unfortunately got cancelled due to the high water and dangerous conditions, but I guess you could say that last years three days of practice paid off this year. The area is called White House (I think). Alton and I started in there on Sunday because it was the most promising area I’d found the year before. We never even had a bite in there this year. But this one spot, a ditch out in the middle, had all the right ingredients for the current conditions we were facing – falling water, post-spawn indicators, and lots of shad. I felt like if I was going to catch bigger ones, this was the only place to be for me in pool #5. So I started there and stayed put all day.

I thankfully caught a 2-pounder early which gave me the confidence to stay there for the duration. It was a grind but I somehow managed to scrape a limit together by going back and forth over the 200 yard stretch all day. My fifth fish came just 15 minutes before we had to leave for the weigh-in. It was definitely a stress filled day. My limit weighed in at 11 pounds, 12 ounces and vaulted me up to 34th place overall. But more importantly, that catch kept me alive in the AOY standings as I now currently sit in the 10th spot.

As in most big tournaments there were fish caught all over the place and with a bunch of different techniques. The winner – who used a smaller aluminum boat – found a hidden pond and basically blew the rest of the field away. I don’t believe it really mattered what he caught his fish on because they were uneducated – basically a little dumber than the rest of the fish. Probably the most productive and popular technique was fishing lily pads. Floating frogs, buzz frogs, speed worms and buzzbaits all caught fish from the many pad fields, mostly in pool #4. I’d say a little more than half the field went to pool #4 each day.

Flipping and pitching soft plastics and jigs also turned out to be a good pattern as it always is on the Red. Guys caught them in super shallow bushes, stumps, laydowns, and on the grass edges as well. Fishing ultra slowly was the main theme there. Personally, I caught them in MacDade on a 6-inch Junebug Kinami Flash and D-Bug and I would say soft plastics “played” a little more of a role than the jig did in this one. I also saw Larry Nixon on day two and he later told me he was pitching a Berkley Power Hog to standing timber. He had the bites to have a huge day but he lost a few in the trees.

Also working well in this event were spinnerbaits, shallow crankbaits and ChatterBaits. There were at least 10 boats in the White House area and most of them were fishing their way around the grass close to shore. I know at least three of these guys who made the top 20 too, including David Dudley.

I was doing something a little different for this time of year, ripping a bone colored 1/2-ounce Rattling Rap and Clackin’ Rap in scattered grass and around stumps on the edge of a ditch about 10 feet deep. When the fish are inactive like they were this week, you either have to slow it way down or speed it up to get a reaction. And the reaction deal was the ticket for me on the Red River.

Overall this tournament was a tough one, but the kind I usually like. However, I can honestly say I’m now looking forward to a good old fashioned “slugfest” you’re likely to see in Kentucky next month for the fifth FLW Tour Major of the season.

I can’t wait to see you there!