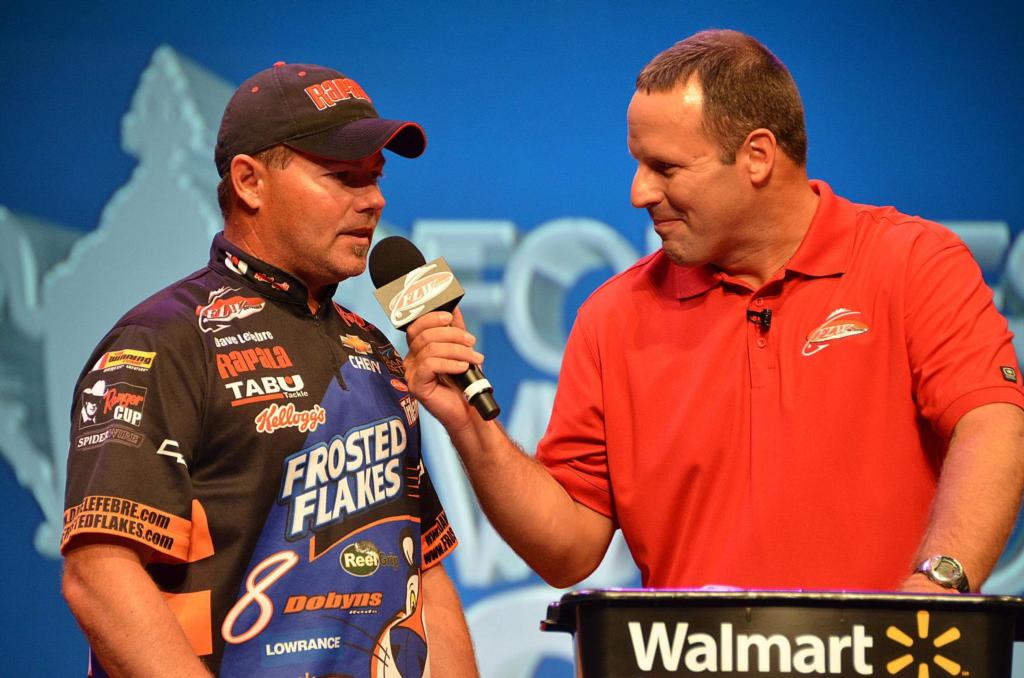 (Editor’s note: Veteran bass pro Dave Lefebre has agreed to take time to share his insights into each FLW Tour event of the 2011 season. After every event, Lefebre will give his thoughts on tournament strategy, winning techniques and other behind-the-scenes stories/information that is compelling to our readers. The following blog represents his ninth installment. Lefebre ultimately finished the 2011 Forrest Wood Cup in 30th place with a two-day total of 18 pounds, 5 ounces and walked away with $12,500 in winnings.)

The 2011 Forrest Wood Cup on Lake Ouachita, Ark., was a huge success! I don’t know how many were in attendance, or how many actually visited the Expo over the weekend, but I know it was extremely crowded and that the Kellogg’s team signed thousands of autographs. Though I honestly enjoy meeting fishing enthusiasts and visiting with the fans, hanging out at the Expo was not in exactly in my plans. I obviously wanted to be fishing on the cut days, and after the incredible practice I had, I thought I was going to have a very good tournament. Well, needless to say, that didn’t happen as I ended up finishing in a disappointing 30th place after the dust had cleared.

My three-day practice was incredible. I found a solid shallow pattern and had a very strong deepwater back-up plan just in case something crazy happened – or I needed to fill out my limit. My shallow deal yielded the bites for a potential sack between 15 to 20 pounds each day of practice, with the possibility of even higher upside weights. I was so excited about it that I had trouble sleeping on the nights leading up to the event. I was fishing in the mid to back sections of two creeks, a little more stained water, with a frog and a buzzbait. I shared my boat with my co-angler friend, David Lauer. In practice, most of the bites we had were violent and the fish would swim off with my lure in their mouth. I didn’t set the hook on most of them and even accidentally hooked a couple. I was fired up!

In the actual tournament however, things simply didn’t work out and that’s all there is to it. I had more than enough big fish eating my frog to have had huge bags on both days one and two, but sometimes it’s just not meant to be. It is frustrating to have something like that happen in any tournament, but I can tell you it feels much worse in the Championship. For whatever reason, I spoke to several other pros who had similar problems and they couldn’t explain it either.

There weren’t too many anglers fishing in the creeks I spent most of my time in, but those I did see were focusing primarily on schooling fish, especially in the morning. Topwater baits like my favorite, the Rapala Skitter Walk, or Zara Spooks and Sammys, produced big time on Ouachita. I found a couple schools of fish too and I can tell you that the main key was waiting for a fish or several fish to boil on the surface and then making a perfect cast to them. Being quick and accurate was crucial because when they blow up on that bait you’d better have you bait on top of them in a hurry.

Being able to cast far is also important when fishing for schoolers. Some guys like thinner braided lines and a spinning reel. Personally, I like a Revo baitcaster, 10-pound mono and an 8-foot limber rod. You can use whatever you are more comfortable with but it’s important to be accurate with whatever equipment you do use. Almost everyone I talked to in the top 10 attributed at least some of there success to a topwater fish or two. I spoke to Jay Yelas after his big day one, and he caught all of his big fish on top that day. Justin Lucas was one of those anglers I saw in my area and he had a big day one as well by chasing surface feeding bass. There is just no more exciting way to catch big fish than that!

Besides fishing for schooling bass, the other two dominant patterns in this year’s Cup were fishing deep brush piles with a big worm or drop-shot and fishing shallow pockets containing brim beds, similar to how Brent Ehrler won here last May. The top-10 anglers were equally divided between the employment of these three techniques.

I convinced some of the highest finishers in this year’s Cup to share with me a trick or two that made a big difference for them, things they all agreed not to tell the media. Here’s what they had to say:

Second-place finisher Randall Tharp weighed in solid limits each day by fishing shallow and covering tons of water. He was fishing the exact same pattern I was fishing, but was in a different location (in much clearer water) and his baits of choice were equipped with treble hooks. You can read all about his pattern, baits, and gear all over the web, but he told me the main reason he bested everyone except Martin was that he used braided line and tied his prop bait to a 17-pound test, 6-foot monofilament leader. Why he was doing this is the key. By using the braided line and leader combo, he was not only able to cast super far, but also able to fish faster because the braid floated on the surface and made it possible to twitch the bait effectively at the end of those long casts. For the ultra clear water and speed of his boat, that tackle setup was a big reason Tharp did as well as he did at the Cup.

Scott Martin won the event convincingly, and like Tharp, agreed to give us something, something he didn’t tell anyone else in the media. We all know he caught most of his fish offshore and around brush piles, but what he didn’t say is that he had many piles marked on his GPS and was numbering them to match notes that he kept on his I-Phone. Each waypoint had a specific note which included the depth of the top of the pile and whether the pile was big or small. When he pulled up to a brush pile, he referred to his notes and knew exactly how far to count his swimbait down so not to snag – because a snag meant no bite. He tried rigging his swimbaits Texas-rigged style and with fiberguards but said the fish wanted the underspin and open hook. And that’s why counting his bait down was so critical.

Probably the weirdest thing that happened this passed week, besides Dudley inadvertently sitting on his crankbait (laugh out loud) was this … Late on day two, I made a long, 15-minute run to a couple of out-of-the-way brush piles I had found in practice that I just knew nobody else would’ve found. When I rounded the last bend I saw a boat out in the middle, and as I got closer I realized the boat was sitting right on top of them. I idled close just to make certain, and sure enough, there sat Mark Rose right on that brush. Later at the weigh-in, Mark told me that he had actually sunk those two piles himself before the cut-off. He went on to say that I was not the only one in the tournament to have found them. We both thought that was pretty odd.

Mark, who placed third overall in the Cup, also told me about a key 3 1/2-pounder he caught on day three. He was struggling that day because the fish were not tight to the brush, so he began fishing around the brush when he noticed a single arch on his Lowrance. He picked up a 1/2-ounce chrome jigging spoon, dropped it to the fish and the fish immediately ate it. It was the only fish he caught in four days on that spoon but one that definitely moved him way up in the standing and put him in contention for the win.

I definitely want to give a big thanks to these guys for sharing their secrets on Lake Ouachita. And congrats to Scott on his big win!

Overall, it was a fun week. It was a little too hot and humid for a northern boy, but Hot Springs is an awesome place for an event like this. I have a feeling we will be back to Hot Springs in the near future – and who knows, maybe even another Forrest Wood Cup.

I’ll talk to you all in my next FLW Tour recap after the FLW Tour Open on Lake Champlain, N.Y. I can’t wait for that one; it’s sure to be another big bass slug fest!