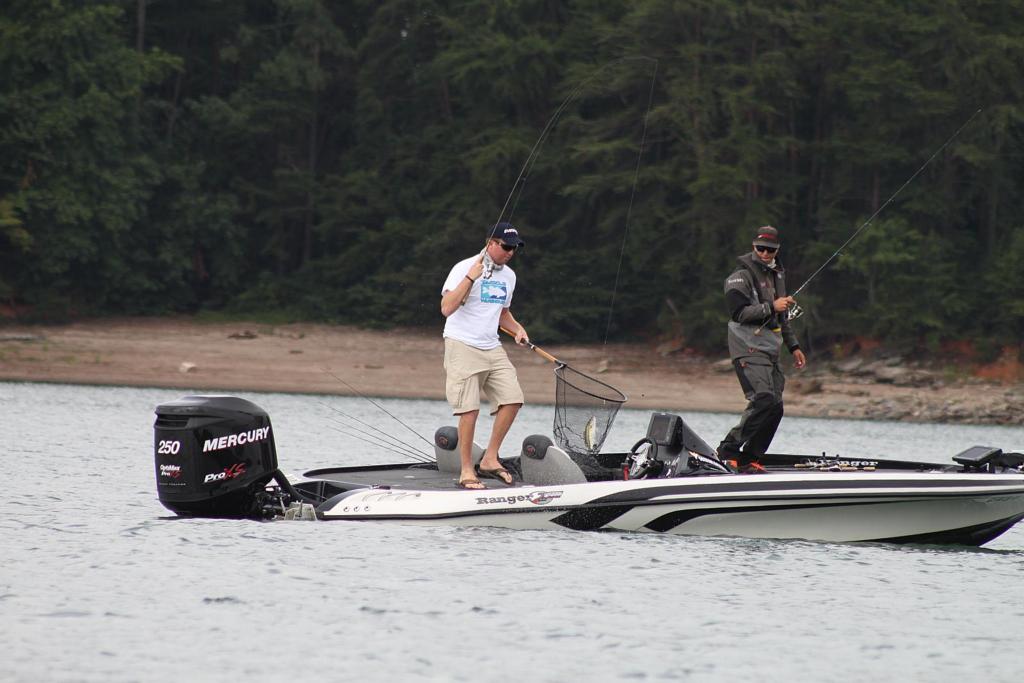 Wow, what can I say, the Forrest Wood Cup was more than I ever could’ve expected. The crowds were amazing, the venue was awesome and FLW did a tremendous job coordinating everything even in the crowded city of Atlanta, GA.

I spent all three days of practice leading up to the event pretty much fishing 15-hour days on Atlanta’s playground of Lake Lanier. Practice was extremely tough as we were only getting about 10 bites a day on the good days, and just a handful on the days that were tougher. I spent most of my practice trying to figure out how to catch fish out of the back of the boat since I knew most of the pros would be fishing isolated deep brush piles. I threw the Picasso School E Rig and Finesse School E Rig quite a bit in practice but it didn’t seem like the fish on Lanier really liked the A-rig; perhaps because they were feeding on tiny 1-inch shad, and seemed to key on individual shad rather than the whole school. After three long days of practice I was already wore out, luckily we had an off day prior to the event.

Well the off day was spent getting tackle ready; my game plan was to throw a shaky and topwater if I drew someone fishing for largemouth, and pretty much stick to a drop shot and a Fish Head Spin if I was going to be fishing deep.

We arrived at the meeting/dinner and had a great time socializing with the fellow anglers and FLW personnel. The dinner was delicious but it ran late, so again didn’t get to bed til around 11 p.m. that night. The alarm rang at 5 a.m. and I was off to meet my first day pro – Cheez-It pro Shinichi Fukae – at the ramp. Fishing with Shin was a great time, although he is from Japan, his English was good enough to joke around and just have an enjoyable day. Shin was an absolute machine when it came to fishing, he would fish a brush pile, make five casts and then move to the next one. This made for a lot of running and by the end of the day I was absolutely wore out, I managed to catch two keepers behind him on a drop shot with a Roboworm for just over 4 pounds and sat in 24th after day one.

Day two of the event I drew OFF! pro Terry Bolton from Paducah, Ky. Terry had a rough day one only weighing in four fish, Terry was fishing similar to the way we were on day one and he managed three keepers and luckily I was able to squeak two keepers behind him again on the drop shot that weighed 5 1/2-pounds. This moved me up into 19th place and made the top 20 cut to fish on day three with National Guard pro Brent Ehrler. I had fished once before with Brent and knew it would be a good time.

On day three, since we had both squeaked into the cut in 19th place, the plan was just to have a good time and catch some fish to try and move up. Other than Brent forgetting to unlock his rod locker and putting the plug in the boat we had a great day on the water. We both managed to catch three keepers again deep drop-shotting and I moved up into 12th place while Brent slid one spot to 20th on the pro side. Although I didn’t make the top 10 in this one, this tournament was probably the most fun I have had. I have to thank all three of my pros, as each one was a true professional and even better people.

The Sunday after the day three weigh-in I was able to check out the FLW expo that featured a casting competition and had a lot of great products; especially the new Ranger Z520C and the 2013 line up of Evinrude motors. Hopefully I’ll be around for a number of Forrest Wood Cups as this was one of the premier events I have been to, and want to thank every member of the FLW staff and media that helped make this possible. The amount of work put into the event had to be incredible and the entire team did a great job.

Next stop, the FLW Tour Open in Detroit a week from now where the fishing ought to be incredible.

Thanks for reading, Casey. www.caseymartinfishing.com