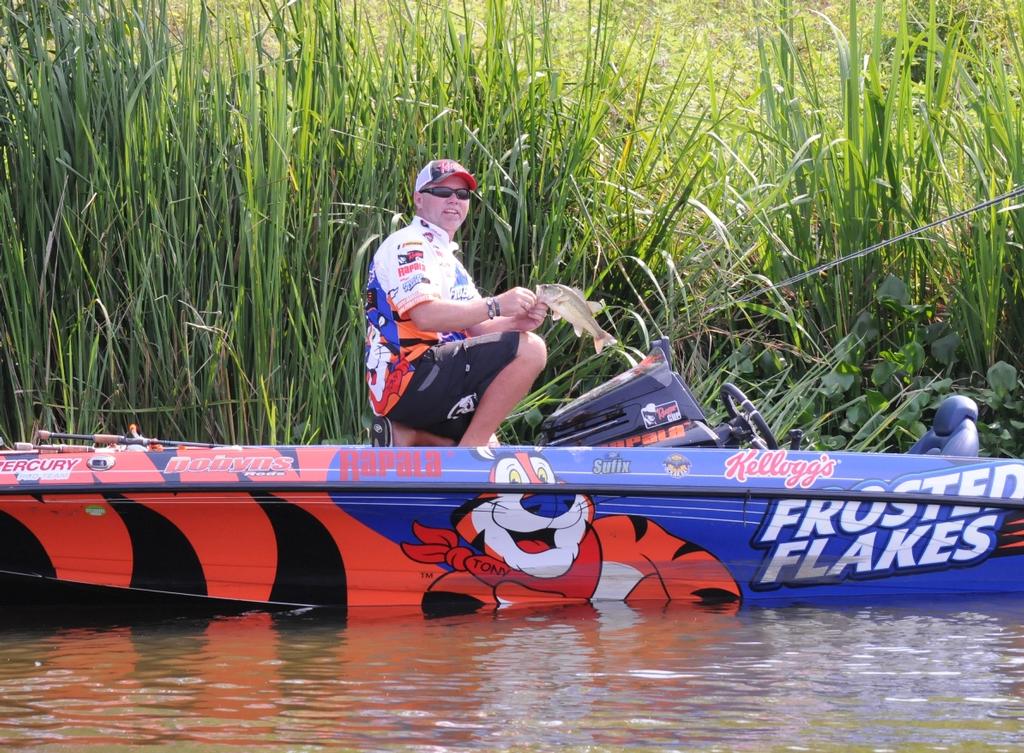 (Editor’s note: Veteran bass pro Dave Lefebre has agreed to take time to share his insights into each FLW Tour event of the 2013 season. After every event, Lefebre will give his thoughts on tournament strategy, winning techniques and other behind-the-scenes stories/information that is compelling to our readers. The following blog represents his seventh installment of the season. Lefebre ultimately finished the Forrest Wood Cup in 22nd place with a two-day total of 19 pounds, 10 ounces. Lefebre netted $12,500 for his efforts.)

The Forrest Wood Cup is the Super Bowl of bass fishing and the Red River, along with the city of Shreveport and Bossier City, served as the perfect venue. This was my 11th straight Cup in my 11 years on the FLW Tour and I’m so glad I got to experience this one. I have a feeling we’ll return to the Shreveport area again and I just can’t say enough about the fans and folks who made this event happen … super job!

I was there to fish the mighty Red River and try to win my first Cup. It was supposed to be tough, hot, and a low weight championship, but I can tell you it was none of the above; it was actually the complete opposite in every category. I caught more than 70 keepers on day one of the event, the temperatures felt like my home in Erie, Pa., and there were some huge bags weighed in, especially on the first day. I couldn’t have scripted a better scenario for my own personal success, but even when everything seems to fall right in line, this sport always throws you a curveball … I think that’s what keeps us fishermen coming back for more.

I finished 22nd and just barely missed the first cut to 20. I was so disappointed because this event was about staying alive and giving yourself as many hours as possible to get one of those giant 7-pound bites. Those who managed to do that on day one or two were able to keep fishing. For the rest of us, well, that bite may have been awaiting us, but you have to make the cut to find out. However, not fishing on the weekend gave me the opportunity to work the Expo and meet some great people and also make a couple of good connections for next season. The Expo was packed and the final day weigh-in went quite well, as my good buddy Randall Tharp took home the Cup. I stayed until the very end and I must admit I got a little choked up. My wife, Anne and I are truly elated for Randy and his wife, Sara. We are also looking forward to winning next year’s Cup on Lake Murray, S.C. – that was Randy’s and my agreement before the Red River began, ha ha.

Practice was brutally hot and humid with thunderstorms in the afternoons. But it was after a big storm on the last day of practice when I found the little sweet spot I’d ultimately spend most of my time on. It was very close to takeoff, a small off-shore rocky area on the main river that was absolutely loaded. The night before our off day, I caught three fish there and one was a 4-pounder. It’s strange that after 100 keepers I would never catch a single big one in the tournament. My decision to leave that spot on day two surely cost me the 2 ounces I needed to make the top 20 cut, but hindsight is … well, you know. I went to that spot first thing again on day two, but after catching a quick limit, I left and never came back. I thought I had more than enough to make the cut so I went looking for a big bite in the pads, which never happened.

This Cup was dominated in super shallow water, lily pads, reeds, cypress trees, laydowns, stumps and riprap. I think every top finisher caught key fish throughout the week on more than one of these categories; we call it “junk fishing,” catching one fish here and one fish there. The popular and most effective baits were no surprise at all as frogs, buzzbaits, shallow crankbaits, swim jigs and flipping were all major players. I caught over 100 keeper bass in two days of competition and all but a couple were caught on a 5-inch Yamamoto green pumpkin cut-tail worm. Bryan Thrift also used a small finesse worm quite a bit, but unlike me, he got some really big bites on it. As far as the best locations, there were not many surprises there either. Most of the bigger fish were caught in the backwaters while more numbers of fish were caught on the main river, as predicted. It also was obvious that Pool #5 was the place to be as well.

Overall, it was a good season and next year’s schedule looks awesome too. I’m particularly thrilled about going back to South Carolina again for the Forrest Wood Cup. I finished a close second on Lake Murray back in 2008, plus we have several family members who live in that area, making that location a little more special.

I’ll talk to you next season through my ongoing FLW Tour recaps. I’ll also be blogging monthly throughout the off-season right here on flwoutdoors.com!