When Everything Comes Together

Lefebre gives all the details on his winning technique 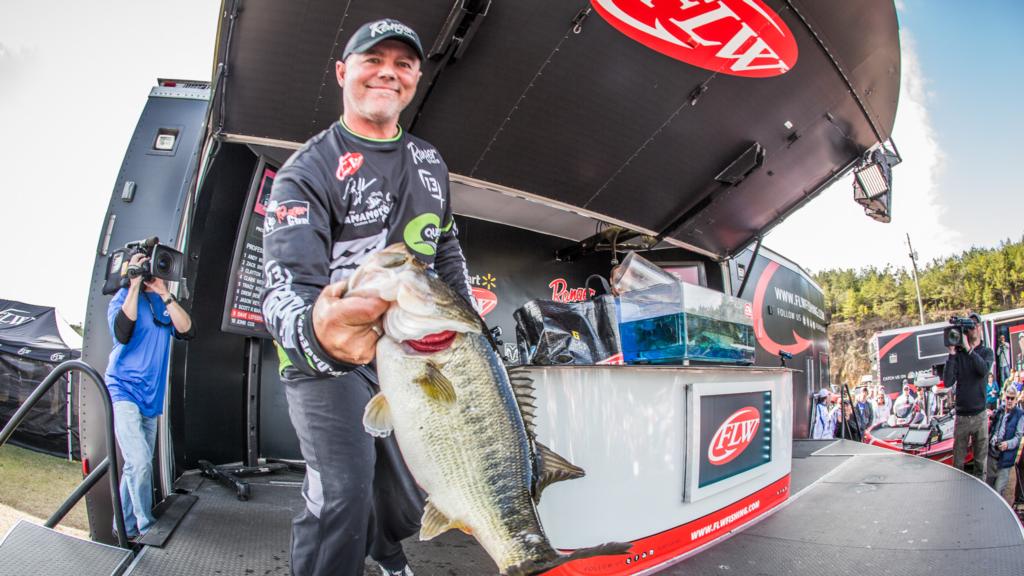 Dave Lefebre hoists one of the bass that launched him to the win on the final day of the Walmart FLW Tour at Smith Lake. Photo by Curtis Niedermier. Angler: Dave Lefebre.
April 2, 2015 • Dave Lefebre • Angler Columns

I told you I liked Lewis Smith Lake … now I absolutely love it!

Smith Lake is the perfect place for big tournaments, taking into account the local folks who help FLW put on a large event and the sheer size of the impoundment. It’s huge, with a good combination of spotted and largemouth bass. And this year we hit it at the perfect time, a time when I’m the most comfortable: prespawn.

I’ll keep the recap part of this blog a little short and sweet this time because I really want to dive into the technique responsible for the bulk of my weight in this event, which was fishing a wake bait.

As you probably know by now, I won the event. I used two basic patterns, targeting spotted bass early and largemouths the rest of the day. Despite the warming water, I was able to put the Sworming Hornet Fish Head Spin and Yamamoto D-Shad combo to good use. Like several guys targeting largemouths, I was running to a super-deep schooling spot first thing in the morning to try to catch a couple of good spotted bass before spending the rest of the day hunting big largemouths. The first three days I did just that, but the last day I hammered on them a little harder before moving shallow.

When I moved shallow, the wake bait was my go-to bait, which was not at all part of the plan going in to the tournament. I actually had a great practice flipping shallow bushes in the off-colored water, but the clearing water forced the change.

Guys caught them sight-fishing, cranking, drop-shotting, swimbaiting, jerkbaiting – you name it. They caught them on the main lake, in creeks and from 1 to 120 feet deep. All this diversity of patterns and productive baits helps makes this lake so special.

My deal, as I mentioned earlier, turned out to be the wake bait. When I arrived at my first largemouth area on Thursday morning, I about had a heart attack. It had cleared up. I could see the bases of the bushes and the rocks on the bottom, and it really scared me. Instead of retreating back to the spotted bass to secure an easy limit, however, I decided to attempt to figure out where the big largemouths went and how to catch them. I put my four flipping rods away and littered my Ranger Z520’s front deck with 17 rods. I tried Senkos, finesse worms, jerkbaits and small crankbaits before finally zoning in on a wake bait. Luckily I had a Rapala BX Waking Minnow in the boat … thank the Lord!

I saw a big fish follow the bait on my third or fourth cast and finally caught my first good fish just after 11 o’clock. I stuck with it, and, though losing a couple of 5-pounders, I managed to get three good ones into the boat to complement the pair of 2 1/2-pound spots in the livewell. I also observed that there were blueback herring spawning in a few of the pockets I fished. Because of my boat draw, I had a short day on day one, and a long day on day two. I was feeling good and looking forward to expanding on this in the coming days.

The following day, I started putting more pieces of the puzzle together. I again caught a couple of nice spots first thing, then went shallow. Though the bluebacks were again spawning, I couldn’t seem to get a big largemouth to show itself until a little later in the day. When I started seeing the bass, though, it was unreal. I’ve never seen so many bass over 5 and 6 pounds in my life, and they bit my bait. I had an 8-pounder explode on the wake bait and jump off right by the net. I went on to lose three others over 5 pounds each in the same manner and then had another well over 6 pounds explode on the bait near the boat. It also eluded my livewell. Do the math on that. It’s staggering for a lake like Smith, but Hoyt Tidwell, my co-angler, can verify. I still managed almost 16 pounds and made the cut. Alive for another day!

I made more adjustments that night, the main one being that I switched from monofilament to braided line and beefed up my hooks a bit. That turned out to be a major key in putting fish in the boat, but it also certainly made some fish a bit more reluctant to take the bait. They followed it longer, for sure, and most of the bites were not as violent. Another key was adding a few more wake baits to my arsenal. On the third day, I didn’t lose as many fish, and I managed just enough weight to get into the top 10 at seventh place. Alive for another day!

I put new hooks on my lures and added even more wake baits to my arsenal just in case. The water had cleared up a bit more each day, and as the wind calmed and the sun shone brighter, subtler baits came into play. Though I saw some huge fish follow several times without committing, at least I didn’t lose any that bit the wake baits on day four. Another big mental factor that last day was milking my spotted bass area and starting off with 13 pounds. It made me a lot more relaxed, not to mention that it was so much fun. I must have caught 20 spots on that Fish Head/D-Shad combo, until I ran out of D-Shads. I went to the largemouths at about 9:30 and then started waking at 2 p.m – a little late, but hammertime!

The very first place I went I smoked them. I caught 5 big ones, including a double 4 lber and 6 plus! It was the flurry of a lifetime, and that was the best moment of my 13-year pro career by far. For the full details on that miraculous double fish catch and to see a couple cool photos of it, visit my Facebook page and check out the last highlighted post!

Wake bait fishing is exciting, and it’s very stressful at the same time. There’s a lot that goes into it, and several very subtle things that can apply, with any one of them making a huge difference. The Rapala BX Waking Minnow is unlike most in the fact that it’s designed to do what it does … wake! The other components such as your line, the knot, the hooks, etc. don’t enter into it so much. You literally take the BX out of the package and it’s ready to go – they are all consistent in their action. Other brands might require the purchase of a half-dozen or so to get “the one” that actually works right. Even then, you have to hold your rod a certain way and reel the bait at just the right speed to make it work. Trust me, the BX is waking made simple, and it performs. Another positive to this bait is that the water doesn’t have to be calm for it to be effective. There can be a ripple or even a slight chop on the surface.

I’m working with FLW Bass Fishing magazine on an in-depth article about wake baits, with input from a few other guys who have more experience than I actually do. It will be coming up in the magazine soon, so keep your eyes peeled for that. It should be a good one!

Next stop: Beaver Lake. See you at the weigh-in stage!

Find out more about Dave Lefebre on his personal website.