From Dead Last to Making Money 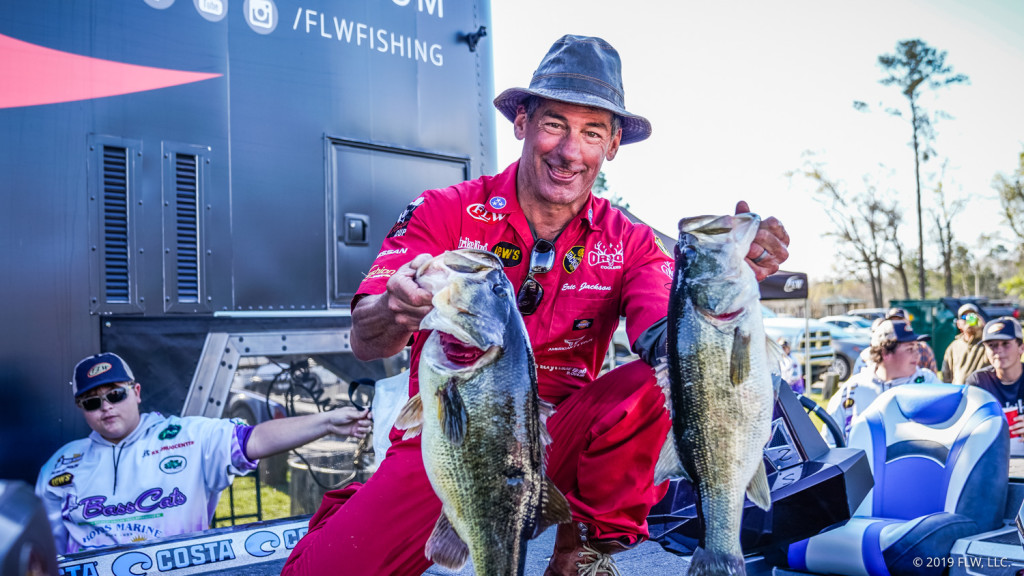 If you were hanging out with me at the FLW Tour event on Seminole recently, you would have thought I won the tournament. I was congratulated by every pro I saw, and they were being genuine. It reminded me how each of the pros in this sport understands what the others are going through and just how important certain milestones are to them. Seminole was the third tournament of my fourth season as a pro. I have fished 23 FLW Tour events now. Until this last tournament, I had never finished in the money. If you want to read some background on my journey, check out the article called “Dead Last” that I wrote after my 166th-place finish at Beaver Lake in 2016.

That was the moment I had my true wakeup call and knew that if I expected to make a run as a pro, I would have to work harder and smarter, and that it might take more time that I’d hoped.

As a whitewater kayaker, at age 20 I dropped out of engineering school and committed to full-time training and competing in hopes of making the U.S. kayak team and going to the world championships and Olympics. I truly expected that I would make the team in year No. 1. I had a respectable finish in 16th place, but only four people made the team. Each following year I thought I would make the team, but it wasn’t until a six-week training stint in Brazil with the then-current world champion from England, Richard Fox, that I made it over the hurdle. I returned to the U.S. with the skills and experience to really make it. I made the team in 1989, my fifth year of full-time training, and was able to eventually win four world championships and compete in the Olympics. Now, I’m attempting to make the team again for my 29th year with a chance to compete in Spain at the 2019 World Freestyle Kayak Championships.

Through it all, I learned that once you prove to yourself that you can do something, it gets much easier. My first team experience made me want to train even harder, as I didn’t want to give up that position. My first world championships win proved that I could do it, and doing it a second time would prove easier, even though it did take me eight more years to win my second one.

Now, I am finally getting somewhere with my fishing results. No, it doesn’t mean that I can’t have a worse finish at the next stop on Grand Lake, a place I have never fished before. I could finish dead last there, or I could win, perhaps. I find that believing I can win (and luckily for me my brain always thinks I can win) keeps me better motivated and excited about competing. 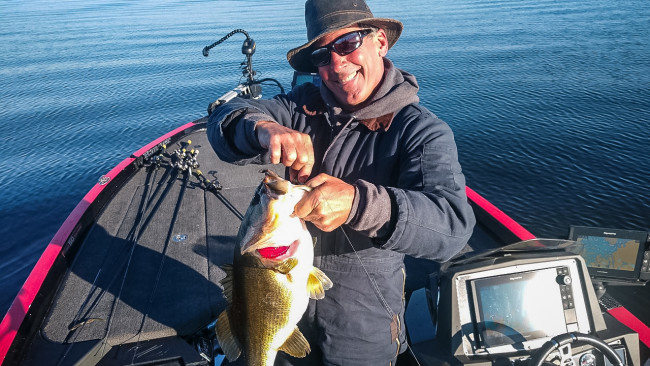 Seminole was one of the hardest tournaments I have fished. I had only a couple spots that produced bites for me, and only one where I caught multiple fish at the same location. My average number of bites in practice per day was only three – from sunup to sundown. Clearly, I had not located a place that was “loaded” like several of the top-10 finishers had found.

My first 30 minutes I started in Spring Creek at a point that produced four bites on day two of practice before the cold front hit hard. My neon bluegill Strike King Red Eye Shad produced a 6-12 on the grass edge in about 3 feet of water. I was quite fired up, and my marshal, Howard Poitevint, seemed to be as excited for me as I was.

I did my mandatory 20 push-ups for the catch and spent the next three hours trying to get bites in that location with no luck. At noon, I shot up to a point on the Flint that had current against it. The spot had produced a 4- and 5-pounder in practice. One was postspawn, and one was prespawn. It was a staging area.

Five minutes into fishing the point in the tournament I pulled a 5.13-pounder in the boat on a Strike King Tour Grade Swim Jig in bluegill color. It was a long time between bites, but I was getting back in the game.

I fished all around that area, punching mats with a weightless Strike King Ocho and swimming my jig but couldn’t find another bite anywhere. Howard was concerned that I was going to miss check-in, and I only had two fish in the boat worth just under 12 pounds. Finally, I gave up on that area and ran up to the check-in. With three minutes left, I buzzed by the check-in boat at 65 mph and ran to the first Bridge. Howard said, “You have only three minutes, what are you doing?” I knew I could get back to the check-in in 60 seconds or less and started skipping my swim jig past the reeds to some open water on the shore. On my second or third skip, Wham! A 4-pounder ate it and wrapped me on a log. I used my 50-pound braid to pull it out of there, threw it in the livewell and made it to the check-in with 15 seconds to spare. From 11 something to 15 something in the final seconds was a game-changer. My official weight was 15-12, which was good enough for 23rd place on day one.

This was my highest result on any day so far. So that was what it felt like to finish ahead of 144 people, but still be behind 22 of them. I liked it. Yes, I beat myself up for not catching a limit. “Again, how can you fish for eight hours and not catch five fish over 12?” I asked myself. Seems impossible, but clearly it isn’t.

Day two was another crazy day for me. The short version is that I didn’t get my first bite until 12, and I missed it. I watched a 3-pounder attack my sexy shad Tour Grade Swim Jig in a hole in the mats at Butler Creek and set the hook before he ate it. I then ran up to the bridge at the check-in area in Bainbridge and fished the banks hoping for bites like my last one the day before.

At 2 p.m., with no fish in the boat and no evidence that I would catch any up there, I chose to run up the Chattahoochee River at the other end of the lake. I had a spot – a big flat that I knew had fish – that I hadn’t tried since practice. I arrived, and there were four boats there. I found a nice hole where I had a waypoint, and I realized the others were fishing farther offshore. I started with my green pumpkin 6-inch Ocho worm rigged weightless and got a 2-pounder in the first 15 minutes. Then, 15 minutes later, I caught a 3-pounder. Then I got a bite from a fish that swam at me and managed to get off the hook, followed by a second bite that I missed. Then another bite from a 1 1/2 that I landed. And then I was out of time.

I did the long run back to Bainbridge and managed to get a few casts at the bridge again, but nothing. Another three-fish weigh-in resulted in my total of 6-2. I was beating myself up for the three missed bites, and Kristine, my wife, put an end to that in a hurry. We have a house rule that you can be upset or sad about something, but you only get five minutes to do that. After that, you have to put it behind you and look forward and be happy. Well, watching the weigh-in starting in 30th place after my 21-14 total, I watched my name start to get pushed down the list … It got to 40th pretty quick … then to 45th. With 15 people left I was at 50th. I thought I was sunk – out of the pay cut – but I forgot that there would be people who zeroed out. Turns out, there were about 10 of them, and I wound up in 55th place, which was good for $9,500.

I had no idea how you get your checks. Barry Wilson and Blake Smith were at my RV. We high-fived getting a check. Wow, what a difference between knowing you have $9,500 coming to you versus knowing you just spent $5,000 for two days of fishing and will walk away with nothing to show for it. It was a feeling of accomplishment … a feeling of “this can work” and “I can do this.”

Kristine knew exactly where you get the check. She walked me over to the black FLW trailer, and there was the lovely FLW staff member holding my check up for me before I even got there. Wow, that was cool. I want more of that …

Sure, I was still bummed that I was well into the top 30 on day one and blew making the cut on day two. If I just landed two out of the three missed fish on day two I would have been fishing on Saturday. I figured if I’d just gone south for more bites on day one, I would be fishing on day three. It hurt to wonder what might have been, but it was still a major moment for me.

Where does this leave me as a tournament pro? I’m certainly more confident in my next tournament. I expect that I will at least get a check. I expect to break new ground and make the top 30, and I hope I can pull off the top 10, and, of course, I think I can win one. My middle-of-the-day self-talk will be more confident, and I will be more confident making a major change in strategy if I’m not catching them. Every positive thing that happened in my last tournament came from changing gears and trying something new, versus sticking to the pattern and hoping for another bite.

Grand Lake has no grass, so it’ll be a new game. It’s nothing like Sam Rayburn, Toho or Seminole. New lures, new patterns, new styles of fishing will all be in play. I’m excited.

See you on the water!