EDWIN EVERS: 2019 Will Be a Tough Act To Follow - Major League Fishing
Shop

EDWIN EVERS: 2019 Will Be a Tough Act To Follow 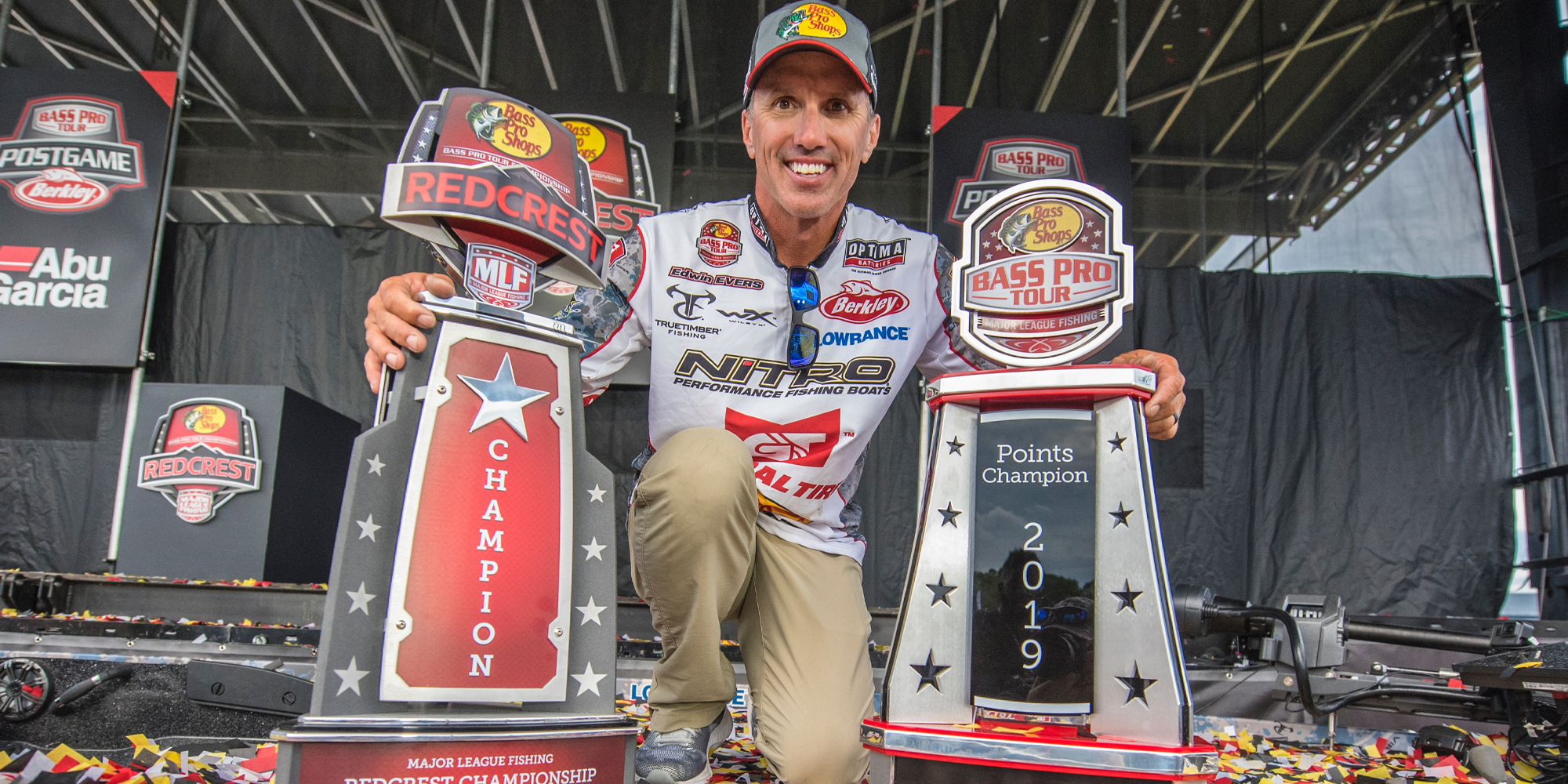 Welcome to my new column here on MajorLeagueFishing.com. I appreciate your checking it out and hope you find it worth revisiting in the future. I know I’ll enjoy bringing it to you each week.

If you’re a fan of MLF, you know I had a good year in 2019. I was fortunate enough to win the Bass Pro Tour points title, as well as REDCREST Presented by Venmo — our year-end championship.

(Check out this video for the backstory on the area of the Mississippi River where I was able to win the REDCREST. No one has talked about this until now.)

It was easily my best year as a tournament pro, and it’s got me excited about starting the 2020 season. A lot of dreams came true for me last year, but I want you to know that I don’t take any of it for granted. I’ll be just as ready and just as focused this year.

I Entered 2019 With Some Nerves

One of the things you may not know about the 2019 season is that I started it being nervous. Although I’d fished MLF since the very beginning, the Bass Pro Tour was brand new. It had (and has) the best group of competitive anglers ever assembled, and the format — where every fish counts, not just your best five — was still pretty new.

I enjoyed success in conventional bass tournaments with a five-bass limit, and I had done pretty well in some previous MLF events, but the Bass Pro Tour was new and a little different from the formats I was accustomed to fishing. I knew there was a big challenge in front of me. It was also the first year I’d be fishing MLF exclusively. There was no backup plan.

I didn’t want it to show, but I was nervous about how I’d do in the new league.

The first thing that gave me confidence was when I looked around at our inaugural event on the Kissimmee Chain of Lakes in Central Florida. I was surrounded not only by my competitors — guys like Kevin VanDam, Skeet Reese, Aaron Martens, Jordan Lee and Todd Faircloth — but also by some of the most accomplished people in the history of the sport, like Johnny Morris, the founder of Bass Pro Shops. It was a powerful reminder that I was in the right place and among the right people.

It also helped me to settle in and focus on the challenge of competition.

With all that said, I have to admit that the competition was the scariest part of all!

Not only was I up against the best bass anglers on the planet, but the “every-fish-counts” format is unbelievably demanding. The fact that there’s no creel limit means you can never “take your foot off the gas” because you know that any one of your competitors could find a huge school of fish at any time and add 30 pounds to his total in just a few minutes.

Then there’s the SCORETRACKER®. I’m the kind of guy who always wants to know where he stands. If there’s a scoreboard — like in my high school football days — I’m fully aware of the score, the time on the clock, the number of timeouts left and everything else it can tell me. But in a Bass Pro Tour event, there’s a big difference. There are no timeouts and the clock never stops. There’s not even a break between plays.

If I sit down to re-tie or change baits or get a drink of water, somebody somewhere is still casting and still catching fish.

The format is more taxing — physically and mentally — than any form of competition I’ve ever tried. In comparison, the five-bass-limit tournaments are relaxing.

Don’t believe me? Think about it this way. First of all, there’s no SCORETRACKER®. You only know how you’re doing. You’re not getting constant reminders that fish are being caught even when you’re not catching them.

Second, in a conventional tournament if you hook a fish you know isn’t going to cull one from your livewell, you don’t care if you land that fish or not. In fact, you’d prefer to lose that fish because it’s not going to your bottom line. You might even try to shake it off the hook.

But when every fish counts, you need that fish … and every other one, too.

Third, every-fish-counts and SCORETRACKER® add a level of strategy that’s just not there in conventional tournaments. When you don’t know how you’re stacking up against the other anglers on the water, you don’t know if you should change what you’re doing. You could be winning, or you could be in last place. You’re fishing blind and guessing at what it will take to win.

Finally, with much more limited practice time, even one small mistake can ruin your tournament. You can’t afford to have a bad period and fall behind. There are too many stages to survive; too many top anglers to outlast.

All that is why you see Bass Pro Tour anglers looking so relieved or so devastated after a round. The pressure is much more intense than any other format we’ve ever experienced.

Luckily for me, I love it.

A ‘Slice of Life’

But the news in 2019 was not all good for me or my family. There were some very personal lows, including some family health issues, a tornado that tore the roof off our house, and a flood at our pecan farm.

It was a slice of life — a series of memorable events and reminders of just how wonderful (and just how challenging) life can be.

Now we begin a new year and a new tournament season. I can hardly wait!

Before I go, I want to thank you for reading. There are a lot of other things you could do with your time, and I appreciate your spending these past few minutes with me.

The sport of bass fishing has given so much to me and my family. I want to give something back, and part of that will be through these columns. I’m going to share some experiences that I hope will benefit or entertain you, and tell you some things that I’m sure will help you catch more fish.

Until next time, let’s all remember that in life, every fish counts.

JACOB POWROZNIK: I Won’t Be Fishing Memories at Lake Okeechobee

EDWIN EVERS: In Search of Numbers