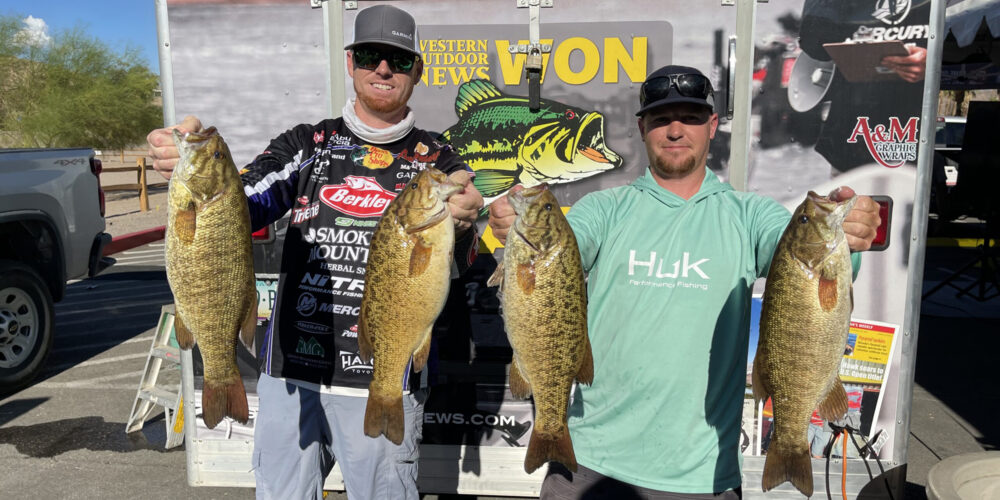 I’m still really soaking in the moment of winning the 2022 WON BASS U.S. Open on Lake Mohave over the weekend. This is an event that I’ve wanted to win my entire fishing career and I’ve fished it six times prior, unable to get a win. To get it done this time is just an amazing feeling. Walking away with a check worth $75,000 as well as a prize package isn’t too bad, either.

I came into the event with a pretty good game plan. The tournament had to be moved to Lake Mohave this year because the water level is at a record low on Lake Mead, where this is usually fished. But I knew Mohave was going to be pretty similar to Mead, also being on the Colorado River. Mohave has bigger fish, but it also fishes a lot smaller.

Managing the fish I found in practice and adjusting to the pressure from the 189-boat field was going to be the biggest key for me.

My Winning Pattern and Game Plan

There’s not a lot of big schools of fish on the Colorado River lakes, so I knew I was going to have to catch them and catch them early. I caught all of my fish the entire tournament with a Berkley PowerBait MaxScent Flat Worm on a drop-shot. My Garmin LiveScope played a big part in helping locate those small groups of fish and see how they were reacting to that drop-shot.

I was able to catch a limit each of the first two days, both of those over 20 pounds. The pressure of leading a tournament from beginning to end is so different compared to winning it on the final day. When you’re leading and going into that final day, you get hundreds of people wishing you luck and it adds a lot of pressure mentally. It’s almost easier in my mind to come into the final day in second or third just so you can have your mind clear.

So, going into the final day I had a 4-pound lead over Spencer Shuffield. I knew I needed another limit, and luckily I had the fish saved to do that. I weighed in a limit worth 17 pounds, 15 ounces, and that was enough to give me a win over Spencer by 1-8. I was in complete shock when they finally announced it.

This is such a special tournament to win because it’s an open, so anyone can fish it. You have pros come out, local hammers, amateurs and even legends of the sport who come out of retirement once a year just to fish this one event. I look at all the names that are on this trophy and it’s an honor for me just to see my name next to theirs. Guys like Aaron Martens, John Murray, and Roy Hawk are guys that I always wanted to be like growing up out west. To win an event that those guys have won before is a feeling I can’t describe.

As a kid, I watched the national circuits and kept up with what was going on with those. I looked up to Kevin VanDam and those big names on the bigger circuits, but those Western guys and the guys winning this event were the ones I aspired to be one day like Martens and Murray. It’s a special event and it’s even more so now.

I’m looking forward to celebrating this one for a bit and enjoying my offseason before we kick off the Bass Pro Tour season in February. Thanks for all the support.