JUSTIN LUCAS: I Have an Appetite for New Tournament Venues 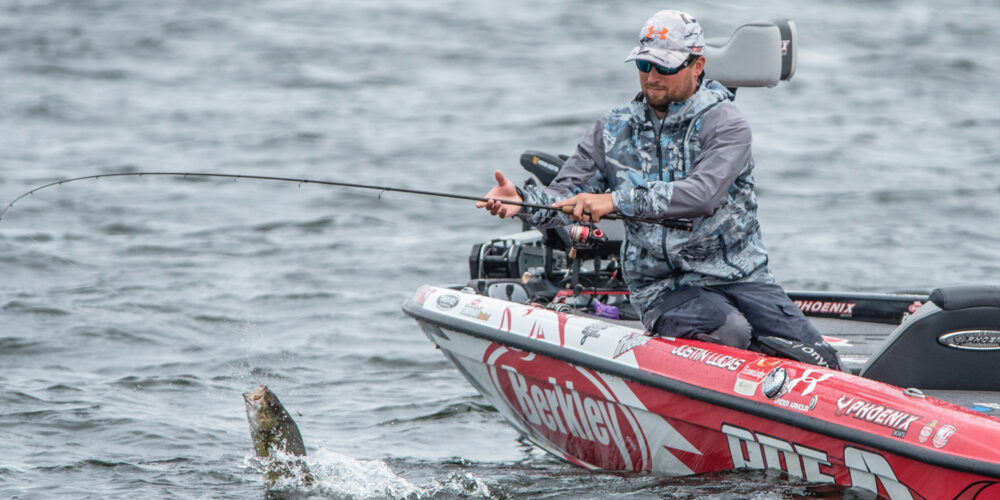 As a professional angler, I enjoy visiting some of the country’s iconic bass fisheries – Okeechobee, Guntersville, Champlain, St. Lawrence River. Those are all fun places to go for sure. But I have to be honest, during the course of a tournament season I start to develop an appetite for some new lakes that don’t have near the history some of those famous fisheries are known for.

A new lake to me is one that has very little tournament history from national tours at the time of year I’m fishing it. Any lake that’s had less than two national events on it in the past 10 years is what I would consider a new lake.

The catch here is the consideration of the time of year as well. For instance, Okeechobee is a well-worn lake in January and February. But if I went to Okeechobee in June, I would consider it a whole new lake and that fires me up.

Over my professional career, I’ve come to really appreciate the unknown adventure of new lakes. When I started my pro career with FLW in 2010, the Tour had a tendency to repeat lakes at the same times of year, season after season. Most of them were good lakes, but because of the numerous tournament track records on those fisheries, the anglers and fans pretty much knew how a tournament was going to end before it began.

When I switched to BASS in 2014, we went to places like Winyah Bay, Oahe, Mille Lacs, Lake Havasu, and Lake Martin. There was very little history from national tours on these places and it made me want to fish more lakes like them.

Part of MLF’s overall tournament philosophy is to go to new places and I appreciate that. They have an appetite for new places just like I do. And so far, they have not disappointed in that department.

I liked the Bass Pro Tour visits to places like Winnebago, the lakes in Raleigh, N.C. and Sturgeon Bay. They were all fresh in terms of history. That same freshness can come from timing as well. I liked Chickamauga in April instead of June, Table Rock in May instead of March and last year’s visit to Toho in May instead of January. I considered these to be “new” lakes because there was so little history on them at these times.

The reason I like going to new lakes is because it’s a level playing field in terms of available history. I like knowing it’s mostly a clean slate to all the competitors in the field. It’s refreshing to know I’m not getting beat with knowledge as soon as I put the boat in.

When I wake up to fish at a place like Winnebago or Raleigh, I’m more fired up than waking up to fish Kentucky Lake in June. Don’t get me wrong, I’m still giving 100 percent on those well-known lakes, too, there’s just something that’s not quite as adventurous about it.

I love that mystery and unknown that a new body of water brings. Every hour on a new lake is like a new chapter in a book. There’s a feeling of untapped potential around every corner. It’s more of an exploration process from the gut. I fish what looks good to me at that time instead of trying to find something that I “should” be doing based on history.

I realize we can’t go to new lakes every tournament. There are those tournament staple locations that are always going to be on schedules. But I will say the potential for new places for the Bass Pro Tour across the U.S. is strong. There are so many “clean slates” out west like Lake Shasta, Mead, Folsom or the Columbia River. It would really be crazy to go somewhere like Potholes Reservoir in Washington State or Lake Coeur d’Alene in Idaho.

Okay, so I’m a little partial to the West. But there are plenty of new options across the country as well: Choke Canyon, Caddo Lake, Lake Cumberland or Hudson River. There are also a lot of opportunities to swap up seasons on lakes. Maybe Lanier in March, Okeechobee in May or Pickwick in October.

I think fishing fans enjoy watching pros fish these kinds of new places as well; it makes for a better viewing and learning experience. To see how pros break down water and make decisions in real-time is the pinnacle of tournament bass fishing viewing. To see that process unfold on a new lake versus a well-known lake is like the difference between a new episode of your favorite show or a rerun.

As 2021 gets rolling, we’re going to get both kinds of venues right out of the gate. First I’ll be headed to the Pro Circuit event on Lake Okeechobee at a very familiar time of year. Right after that, I’ll be headed to the REDCREST on Palestine, which will feature some of the very mystery and adventure I’m craving right now.