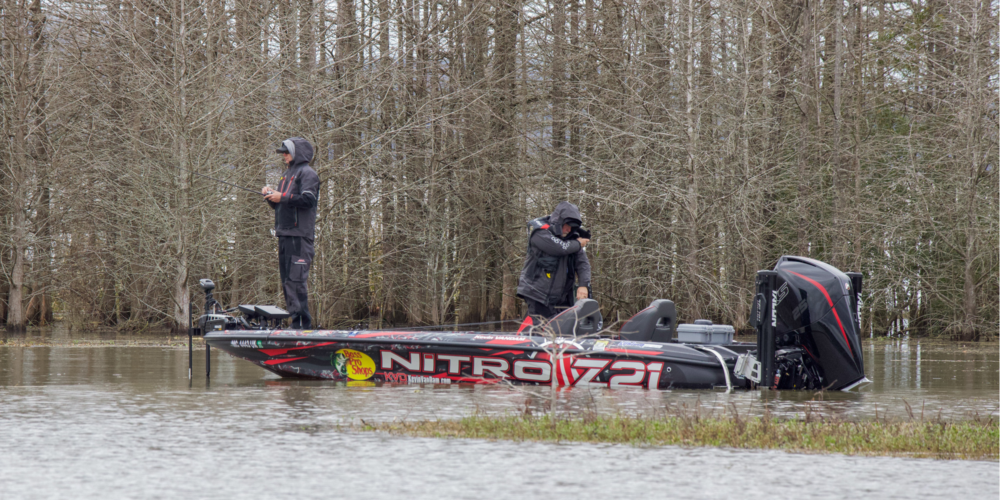 It seems no matter how long I fish professionally, I still encounter conditions that I’ve never experienced before. Lake Eufaula last week was one of those deals.

I’ve certainly had my fair share of fast, rising-water tournaments, but I can’t really remember one where the water came up nearly 3 feet and then back down 3 feet in a span of about 30 hours.

Fast-rising water and fast fluctuating water are two different things. With heavy rain in the spring, the level in reservoirs usually comes up and stays up. Rarely does it yo-yo up and down so drastically. The only other place I’ve experienced that kind of fluctuation is on tidal fisheries like Potomac or the James River. But there, you have a tide chart that predicts the up and downs.

I spent the first practice day looping the entire main body of Lake Eufaula, mostly just looking. I discovered that all the grass on the lower end was gone. The flats of thick hydrilla I knew of from the last time I fished Eufaula were non-existent. I settled into the Cowikee Creek area up in the river where I found bank grass and plenty of hyacinths. I caught a few fish casting a Thunder Cricket and a swim jig, but what really got my attention was punching up a couple of true Eufaula behemoths out of hyacinth mats.

I expanded on that area the second day and I liked what I had going. There was plenty of healthy grass, the watercolor was decent and I knew, from history, that area of the lake stayed pretty stable. The fish in that part of the lake were moving in to spawn and I figured they would only continue to move in with rising water.

With that, the Cowikee Creek/Witches Ditch area of Eufaula would be my starting place.

Then came the rain, and lots of it – for about 10 hours straight.

Off to a Sluggish Start

The biggest problem with my overall strategy was that I was fishing in Group B. So all that rain had 24 more hours to flush down the Chattahoochee River. When I pulled into where I wanted to start on my first competition day, it was a total mess: raw, cold, muddy water had blown the place out.

My gut said: “Run to the dam!” But my head kept telling me the fish were still there, and that I needed to give the area some time. So I dropped the trolling motor and started fishing anyway. It was a big mistake and I knew better.

Two and a half hours later without a bite, I finally aborted plan A.

I put the Z21 on pad and ran down to the other end of the lake to start from scratch. Then I went another period without boating a scorable bass. So to put this in perspective, the first two periods of the first day of the 2020 season have whizzed by and I’m at zero – this was not the way to start a new season!

I decided to spend the last period fishing isolated patches of water willow on the bank with a Thunder Cricket, and I finally caught my first scorable bass. That fish told me what I needed to know: flooded water willow had potential.

By then, the water had come up so much, I couldn’t visually see the water willow patches. So I turned to my Humminbird 360 to help me “see” the submerged patches. I finally got into a rhythm in the last two hours of the day, plucking fish from the submerged water willow on the Thunder Cricket. In the last period, I managed four fish for 13-11, which completely saved my day – and possibly my season!

After Day 1, I was in lucky 13th place and my confidence flowed again. The water willow pattern had me amped up. I couldn’t wait to really get after it on my second day. I assumed the water would keep coming up and that would make those water willow clumps even better. However, when I checked the water level on my off day and noticed it had started to drop hard, my heart started to sink with it.

So it was back to square one, again. The closest pieces of cover to the dry willow clumps were docks, so I went to work picking apart docks and brush around the docks with a Thunder Cricket. That pattern worked most of the day, producing four more bass for 11-12, which was enough to get me to the Knockout Round.

Navigating the Knockout Round

Going into the Knockout Round, my confidence soared again. The dock program fit me perfect – until I got to my best two stretches of docks and discovered several other anglers from Group A had tapped into the dock pattern, too. Once it became a take-a-number deal to get on the best docks, I decided to make a huge gamble.

I felt like the water back up in the Cowikee area of the river had begun to clear up a bit and perhaps that bite window might open back up since the mud had started to settle. So I made long run from the lower end of the lake back up to Cowikee. But the water was still too turbid for my liking and I ended up running all the way back down the lake to find some fresh docks.

I closed out the event fishing docks, catching six bass for 18-15, which left me in 13th place.

So for me, Eufaula was all about staying on the fly with the fluctuations. I had to start from scratch and improvise with each new water level that was thrown at me. I didn’t make the Championship Round, but was pleased with my quick adjustments, making something out of nothing each day to get a solid start to the season.