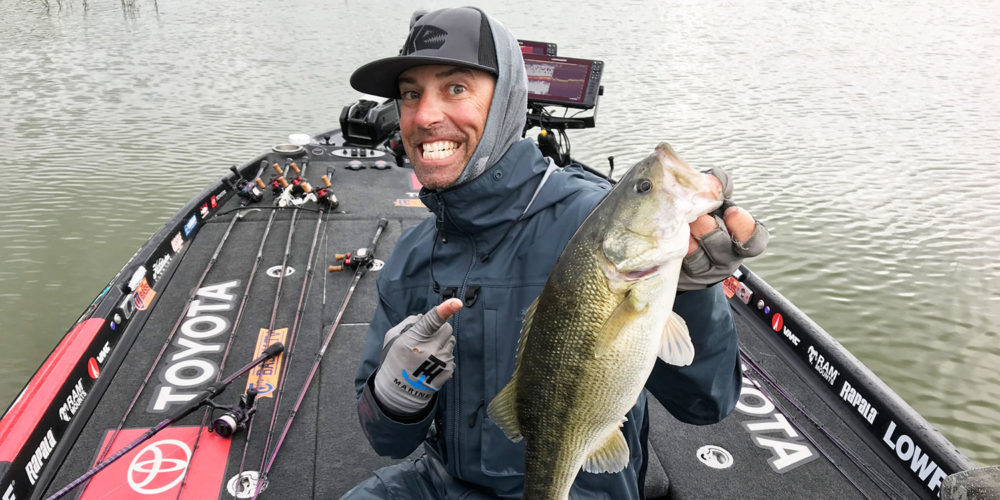 The chicken rig is basically a weedless version of the Neko rig. It’ll let you fish this deadly bait set up in almost any type of cover, no matter how thick or nasty.

The parts I use to build it are simple and straightforward. I start with a VMC Finesse Neko Hook. I like the No. 1 or 1/0 size with the bait I’ll recommend in a minute, but you can go up or down depending upon the size of the bait you’re using.

The Finesse Neko Hook is perfect for a chicken rig. It’s super sharp, the shank is just the right length and it has a couple of fluorocarbon barbs on it to hold the bait in place.

My weight is a VMC Half Moon Wacky Weight. It’s a nail weight with a kind of nub on the end. I generally prefer the 1/16-ounce size, but if I’m fishing deeper I’ll go as heavy as 3/16-ounce. It just depends. Stick it in the fat end of the Flute and push it into the dimple. Make sure it’s straight into the center of the worm. This will make the weight flat with the plastic.

A Berkley PowerBait Flute Worm is my go-to bait. It’s fat on one end and has a thin, straight tail on the other. It also has a series of three ribs on it that’ll help you rig a chicken rig correctly. It comes in three sizes. I usually start with the 5.7-inch size and then go down or up as necessary.

Threading and Fishing the Chicken Rig

I thread the hook about two-thirds of the way down the worm, and Texas-rig it. I use the ribs as a marker. It’s important to keep the hook in line with the bait. You can twist the worm around the shank of the hook to help. A perfectly straight, in-line hook placement will give you a natural action and help avoid line twist.

This rig will drop the plastic down at an angle, but no two falls will be exactly the same. When it’s on the bottom the worm will stand straight up. Just a little rod shake will make the tail wiggle. It’ll look exactly like the real thing.

I’m not going to cover tackle right now because so much of it varies by where you’re fishing and how big the fish are that you expect to catch. That said, this is a finesse presentation so I use spinning tackle. And, as you know by now, I use Abu Garcia rods and reels exclusively and I never use any brand of line other than what’s made by Berkley. I’m a professional, I only use the very best.

See the Chicken Rig in Action

It’s a little difficult to make things clear about the chicken rig in a blog, so I’ll give you one more tip: Go to my YouTube channel and watch the video I filmed in the shop. That’ll help with the details (subscribe while you’re there, so you get all the good stuff automatically, it’s free!).

There’s really not much else to say about the chicken rig. Like I said before, it’s a super effective, weedless version of the Neko rig. Try it the next time you want to fish one in heavy cover. You’ll be amazed at how efficient it is under tough conditions.