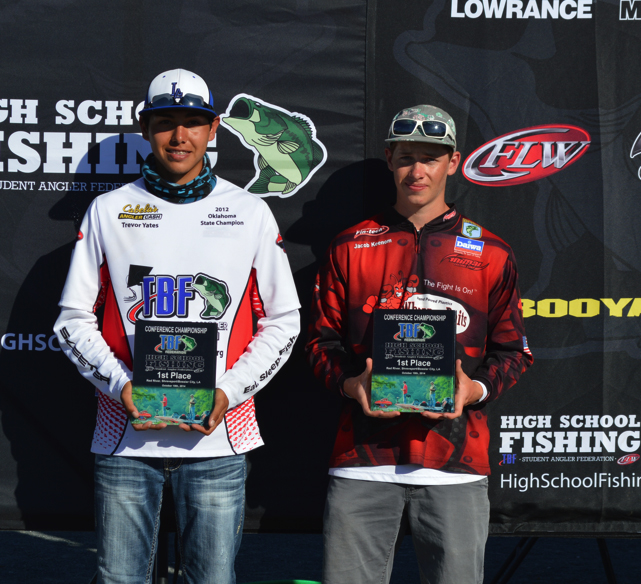 The event pits 10 high school teams from across the country against one another in a battle for ultimate bragging rights and a $10,000 college scholarship.

“There’s a little bit of pressure being on our home lake,” says Keenom, 17, a junior at Meeker High School. “I just want to do well and show the world what small-town kids from Oklahoma can do.”

“It would mean the world to me to win the championship in my home state and on one of my favorite lakes to fish,” adds Yates, a senior at Little Axe High School in Norman. “I'm really looking forward to representing the state of Oklahoma on Grand Lake and can’t wait for the tournament.”

Yates and Keenom qualified for the High School Fishing Championship by winning the Southern Conference Championship last October on the Red River out of Shreveport, La. Their five-bass limit weighing 12 pounds topped the field of 33 teams, who hailed from seven south-central states.

“It felt really good to come out on top,” Keenom recalls. “It was our first time fishing the Red River. We struggled during practice, but finally got on a pattern during the tournament.”

“Winning the conference championship was amazing,” adds Yates. “We thought if we could get a limit with a good kicker fish we’d be in the hunt. It took us until about 1 p.m. to get the limit. I’d lost a fish that weighed about 5 pounds in the morning, and was afraid that fish would come back to haunt us, but we were able to cull two of our smaller fish in the last hour of the day.”

The victory was sweet, and left them hungry for another win at the nationals on Grand Lake. After spending the winter studying lake maps, interviewing local anglers and formulating strategies for the sprawling reservoir, they’re anxious to hit the water.

“We’re ready to get on the lake and get started,” says Keenom, who is optimistic a variety of patterns will be in play in late April. “That time of year one end of the lake is usually warm and dirty, while the other is clear and cold.”

During the same time frame in April 2014, he and Yates finished strong at the TBF/FLW Grand Lake High School Fishing Open, placing third in a field of 29 teams to qualify for the conference finals.

It was the first major milestone for the pair as teammates, although they’ve known and competed against one another for about five years. “It’s fun fishing together,” says Keenom. “We’re both versatile and work well as a team.”

Yates, too, counts such friendships and experiences among the many benefits of the High School Fishing program. “It also helps me prepare for the next level of competition,” he adds. “My dream is to become a professional angler in a series like the Walmart FLW Tour. My goal is to attend college and get a marketing or business degree while fishing for a college club. I also want to start fishing Opens and weekend series after I graduate from high school.”

Keenom also envisions a future in fishing. “I plan to fish high school events as long as possible, then hopefully get into college fishing and take it as far as I can,” he says.

For now, however, Yates and Keenom are content to prepare for their chance to claim the national crown for Oklahoma, for themselves, and for small-town bass fans everywhere.