Spending the off day at Chickamauga with the current AOY leader 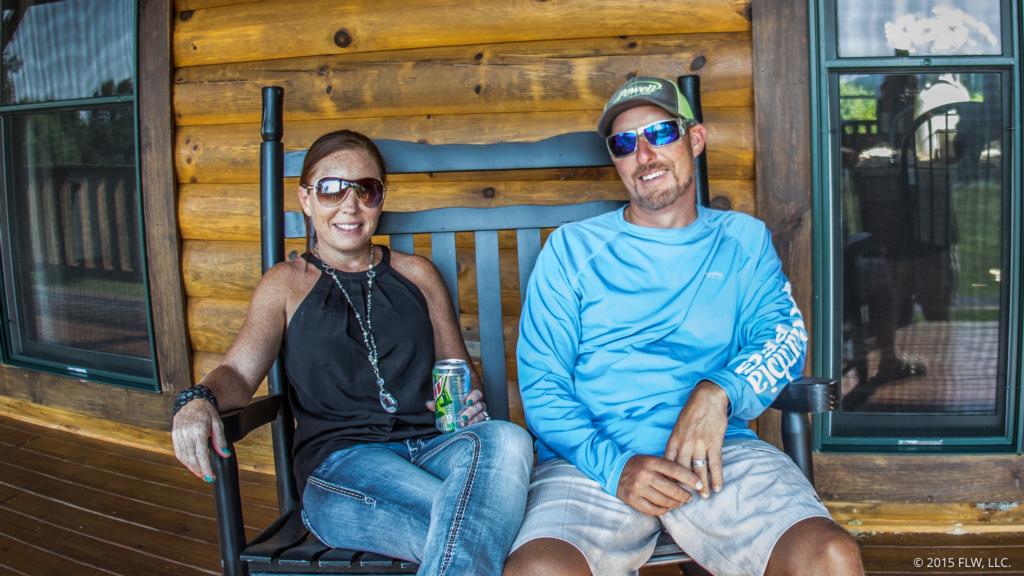 Practice for a Walmart FLW Tour event is a grueling three-day stretch where pros usually burn up every minute of daylight out on the water. But for the last few seasons, FLW Tour rules have mandated an off day on the Wednesday before each tournament begins.

We wanted to see what goes into those final hours of preparation before a Tour event, and so this morning, a day before the Tour’s fifth stop begins on Lake Chickamauga, we invited ourselves over for breakfast at the home of current Angler of the Year leader and tournament favorite Wesley Strader and his wife, Stephanie. The Straders live in Spring City, Tenn., just a few minutes up the road from the tournament site in Dayton. 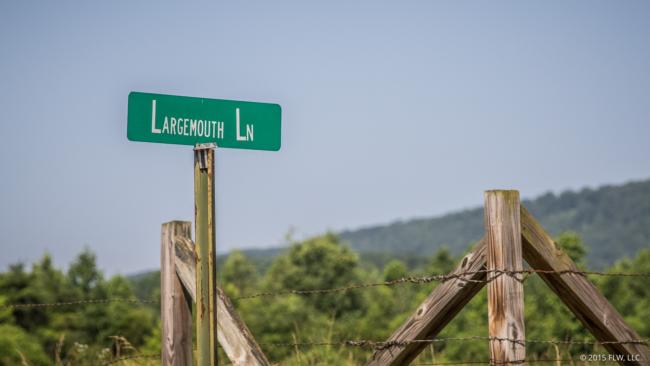 How fitting that Wesley and Stephanie live on Largemouth Lane? And yeah, there’s a bass mailbox out front.

Largemouth Lane is a gravel road that was originally just a driveway, but after other families moved to the neighborhood, it needed a name.

“We were going to call it Strader Road, but that was already taken,” Stephanie says. “So I told Wesley, 'Why don’t you name it after your fishing?'”

We thought it was a good choice. 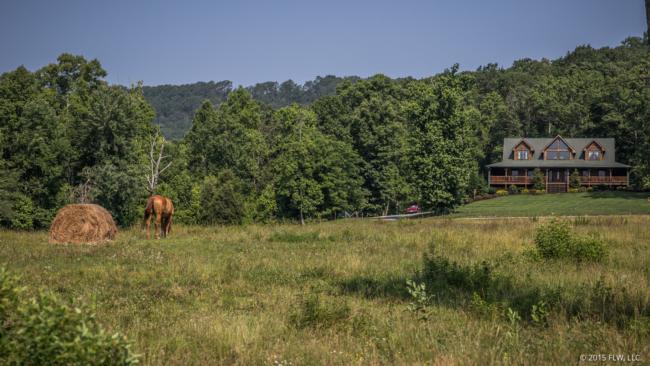 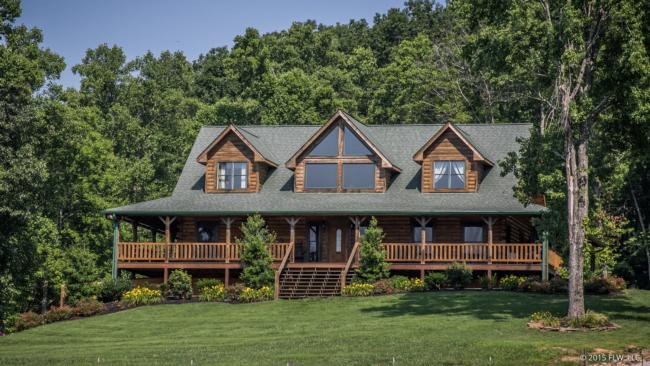 Their log cabin style home sits at the top of a hill a couple of hundred yards off the paved road that takes you to Largemouth Lane. The home was built about 10 years ago, but the Straders lived on the property long before that. 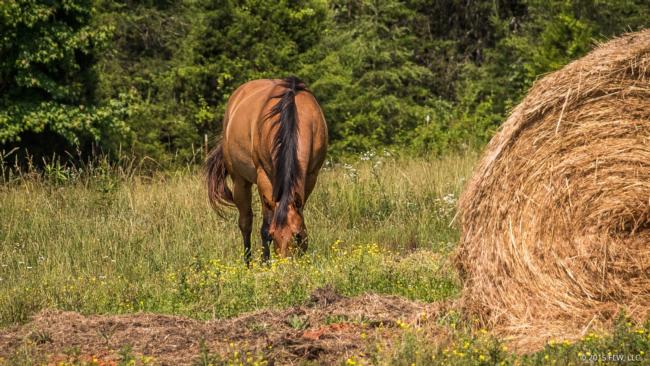 With the help of her grandfather, Stephanie purchased the initial 10 acres of property where she and Wesley live, and they added another five acres later. That’s plenty of room for a handful of Stephanie’s horses – “grass poopers,” as Wesley calls them – to graze out in front of the house. 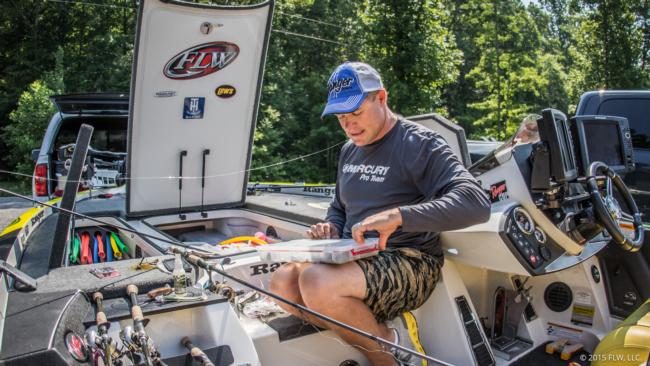 Wesley travels the Tour with Indiana pro Shad Schenck, who is staying with the Straders this week. The two first paired up back in 2002, when Wesley won a Tour event on Lake Ouachita and Schenck finished fourth.

Wesley and Schenck have become great friends. They guide waterfowl hunters together in the fall at Hageman Reserve, a membership-based hunting and fishing lodge that Schenck’s in-laws own in Texas, and they share information on the tournament trail. They're also each others biggest fans.

“I don’t have a brother. Wesley does,” says Schenck, "but he’s like a brother to me. Wesley is the best guy to be with on Tour because he’s the only guy on Tour that everybody likes. Everybody wants to see him do well.”

The two make a good pair. Schenck is quiet, detail-oriented and organized. He says he always has a plan. Wesley, on the other hand, is not quiet. He never knows how he'll fish until the morning of the competition. Wesley helps Schenck relax, and Schenck helps Wesley do things like find his jig box. Schenck also, for some reason, gets the chore of waxing boats. 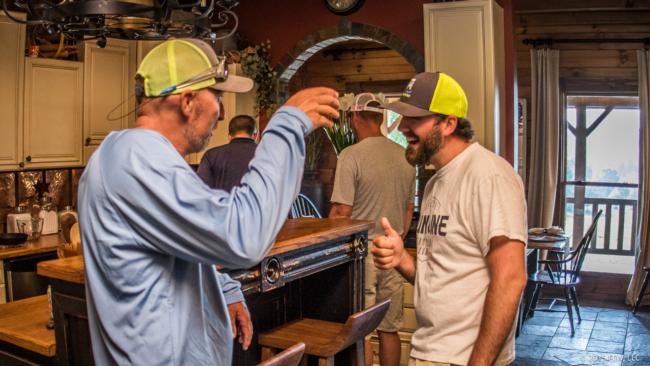 Also joining the two pros this week are co-anglers Luke Dunkin (shown here), sales manager for T-H Marine and the co-angler champ this year at Beaver Lake, and Tim Guard, a friend and high school classmate of Schenck. And there’s Pete, the black lab. He ran off to find some shade before we could snap a photo. 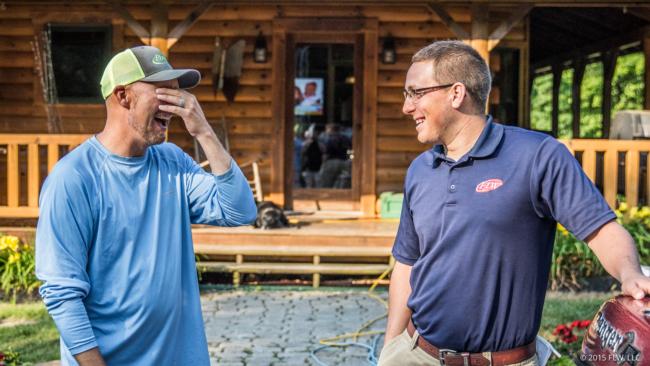 Naturally, there was a good bit of talking fishing, and quite a bit of poking fun, and a few barely believable stories. As most folks in the industry will tell you about Wesley, he’s a cut-up – the “Clown Prince of Bass Fishing,” as FLW Weighmaster Chris Jones likes to say. We shared a lot of laughs. We also learned some new words, like “wollygobber.” Even Google couldn’t define that one. 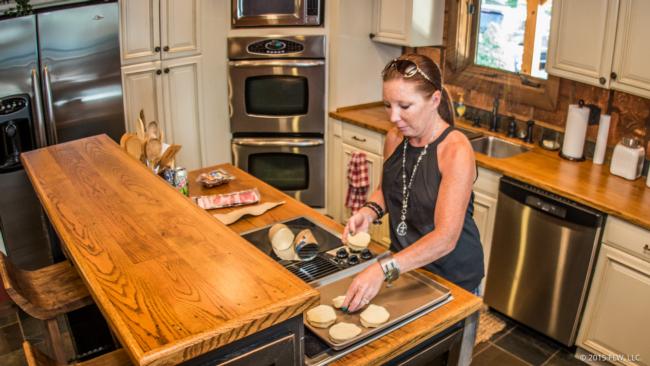 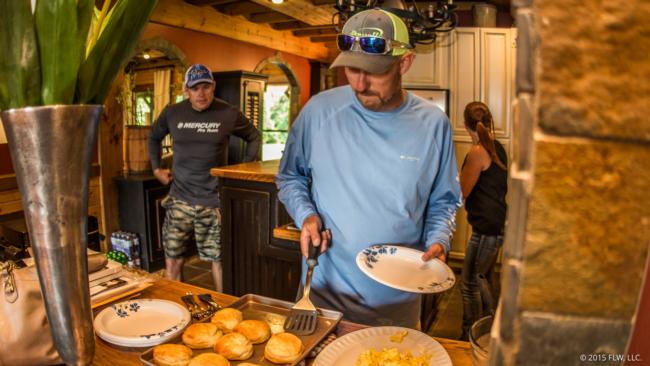 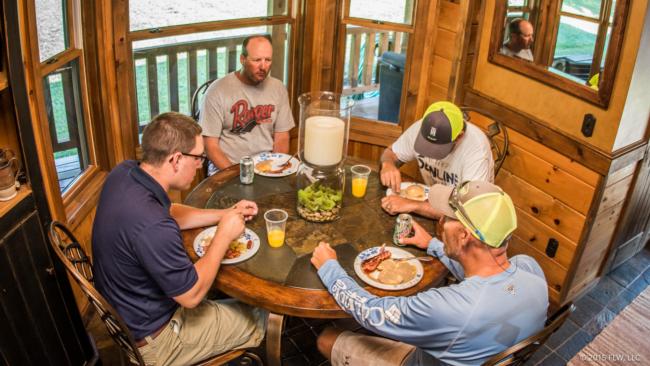 After eating, we talked about ledge fishing, and how the Internet has made it hard for pros to keep new techniques and baits secret these days. Wesley still has a few secrets up his sleeve, though, including a few new baits that … well, we promised not to tell. 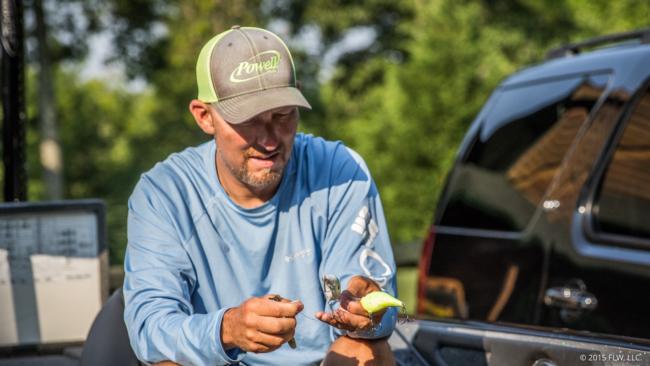 Wesley also told us about growing up in east Tennessee. He cut his fishing teeth on Watts Bar and was the president of the bass club at Rockwood High School back in the late 1980s. Don’t quote us on this, but the club was probably one of the first high school bass clubs in existence. Wesley is still good friends with the school principal who mentored the club back in those days.

High school is also where Wesley and Stephanie met. She moved to the area and started at Wesley’s school in 1989, when she was a junior and Wesley was a senior. He got the job of showing her around the building on her first day. They were married in 1995 and will celebrate their 20th wedding anniversary this December. 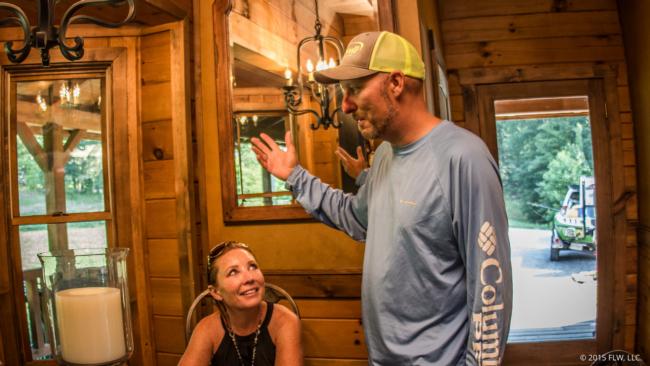 The Straders adopted daughter Madison a few years later. She’s soon to be 18 and is into competitive cheerleading, which used to consume most of Stephanie’s time. This season, however, was a lighter year for the cheer squad, so Stephanie has been accompanying Wesley on the road full time. She handles almost all of the business side of Wesley’s fishing career, including social media and sponsorship negotiation. She even staffs a booth for Typhoon, one of Wesley’s sponsors, at trade shows such as ICAST, the Texas Bass Classic and this evening's Walmart FLW Tour registration meeting. Taking the business work off Wesley’s shoulders has allowed him to focus more on fishing, and to stay more relaxed. It seems to be paying off this season. He’s having his best year to date. 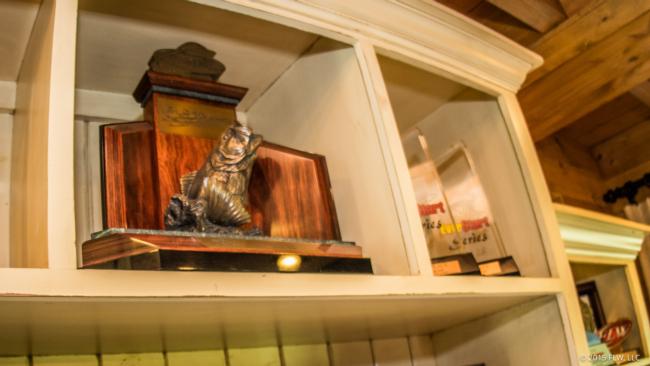 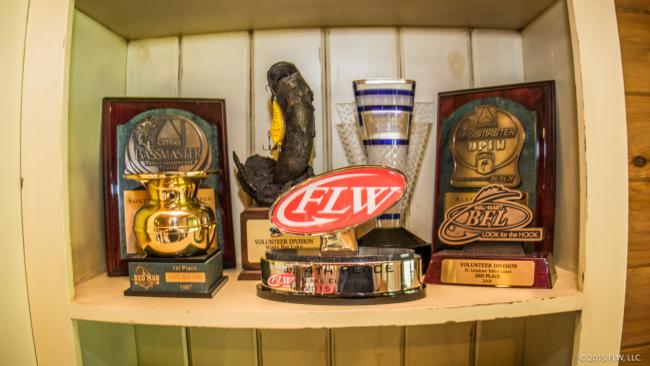 We took at look at some of Wesley’s trophies, including awards from back in FLW’s Red Man days and his 2002 Tour win. That win is what propelled Wesley to become a full-time bass pro. Prior to that, he “hammered nails” and did whatever it took to make ends meet and keep him on the water. 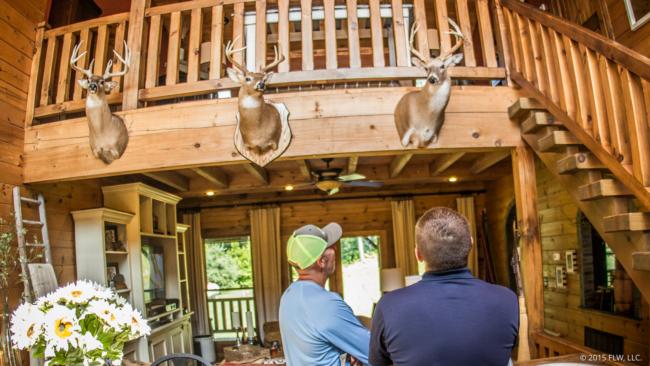 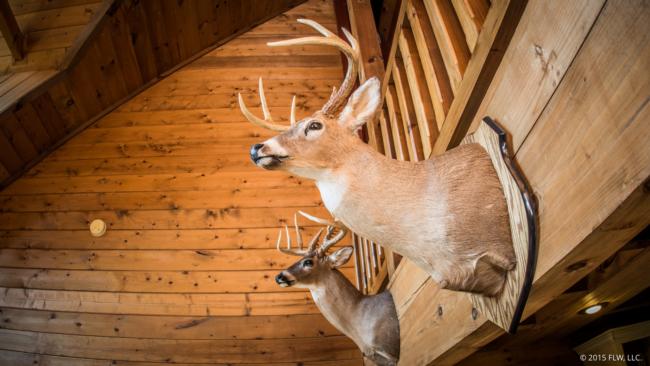 And, of course, we talked a little hunting. The three whitetail mounts in the top photo here welcome visitors who pass through the front entrance of the Strader home. From left to right, they were harvested on Schenck’s place in Indiana, in Tennessee and in Illinois. Bow-hunting is the pro's favorite pastime in the off-season. 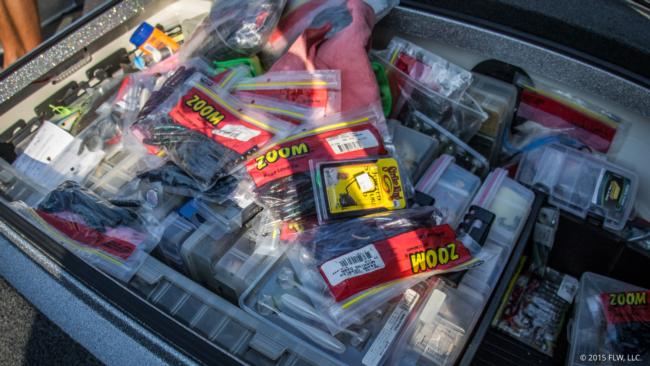 Wesley says his practice this week has been so-so, but that’s what every angler says before a Tour event. He says he doesn’t plan to play bumper boats on Chickamauga’s crowded ledges, and the 20 rods out on the deck of his Ranger and the pile of tackle that he's tested out tell us that he’s sampled every possible summertime pattern.

By the way, he picked local pro Michael Neal to win. 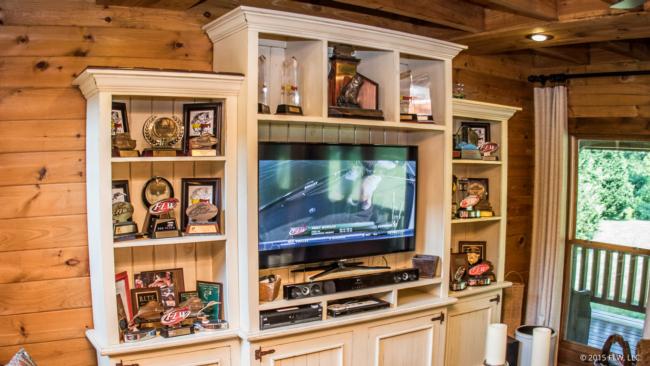 The last time the Tour visited Chickamauga was in 2013. Wesley finished second to Casey Martin, when Martin hauled in more than 103 pounds with an umbrella rig. His winning margin over Wesley was more than 22 pounds – second biggest of all time on Tour.

In the living room, Wesley pulled up the TV episode of FLW from that 2013 tournament.

“I’m so glad that thing’s illegal now,” he says about the umbrella rig.

Would it have made a difference in the outcome if it had been illegal back in 2013? Maybe, but maybe not. This time around, however, Wesley has more than just the tournament win on the line. As the AOY leader, he’s in the driver’s seat to win the season-long points title, which includes $100,000 and qualification into both the 2015 and 2016 Forrest Wood Cups. If he wins, the AOY title would be held by an east Tennessee pro for the third consecutive year. Dayton native Andy Morgan has won it the last two years. 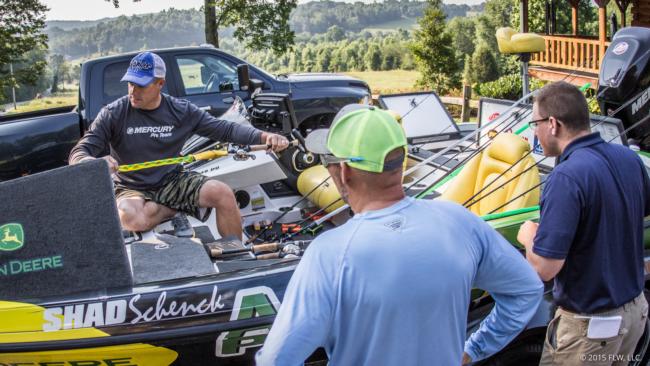 Back outside, we chatted with Wesley’s roomates about the AOY race and how he’s handling the extra attention and pressure that it garners.

“He deserves it [the title]. He’s paid his dues,” Schenck says. “I can tell you this; if I was in the lead after four events, and was fishing on my home lake, I’d feel pretty good.”

“Shad’s his support system, and I’m like his four-leaf clover,” jokes Dunkin, who’s practiced with Wesley at all but one event so far this season.

Regarding the AOY race, Wesley is trying to play it cool.

“He doesn’t talk about it. We do a lot more than him. And I will say this, I think it’s somewhere back here,” says Dunkin, gesturing toward the back of Wesley’s chartreuse Powell Rods hat, “especially as we get closer to the end of the year because I know he wants it.”

We left the Strader home before lunchtime so the anglers could finish their prep work and we could get ready for the registration meeting. For Wesley, this is a week of expectations and opportunity – a chance to put some distance between him and Bryan Thrift, John Cox, Zack Birge and the rest of the pros who are chasing the AOY title in his backyard.