Shinichi Fukae has stuck his hand down the mouth of a bass before, but generally speaking the bass is fairly docile. It’s different with catfish, though, as Shin learned last Sunday morning when he went catfish noodling with Wesley Strader and a few of his acquaintances on Watts Bar Lake.

“I thought it would be fun, and it was,” says Strader, who set up the noodling trip after he and Shin missed the cut at the Walmart FLW Tour stop presented by Igloo Coolers on Lake Chickamauga. Participants included Shin and his wife, Miyu; Strader’s wife, Stephanie; wildlife officer Chris Combs; and Strader friends Julie and Jake Harrell. 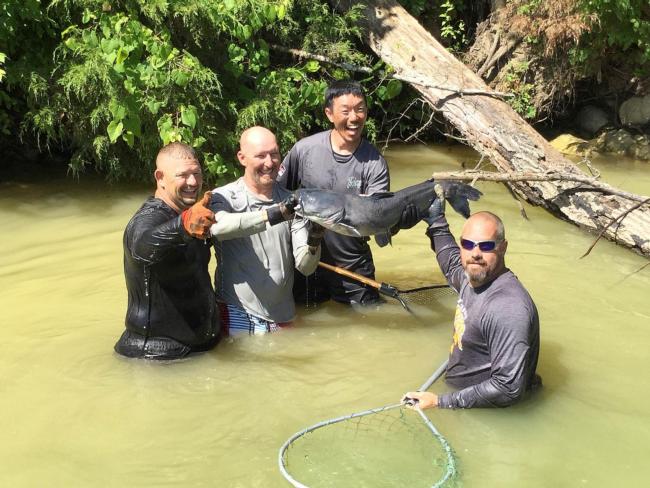 Jake Harrell has “catfish boxes” scattered around Watts Bar, the next lake up the Tennessee River chain from Chickamauga. The rectangular boxes are positioned in fairly shallow water and attract spawning catfish, which use them for beds. “Noodlers,” as those who participate in the activity are called, wade up to a box or dive down to it, gingerly put their hand into it and feel for a catfish. If they touch one, they slowly slip their hand into the fish’s mouth. Presuming the catfish follows the script, it will clamp down on the noodler’s hand so that he can then extract it from the box.

“Shin got it right on the first go-around and came up with about a 25-pound cat,” recalls Strader. “That’s pretty rare for a first-timer.  When he felt it, the catfish locked down on his thumb and out he came with it. I told him, ‘Don’t let go.’ He didn’t. He’s a pro; I turned that boy into a Japanese redneck.”

Possibly, though it’s unlikely Shin and Miyu will make noodling a full-time hobby. In fact, Shin wasn’t all that enthusiastic about being bitten by a catfish, as Strader recalls. 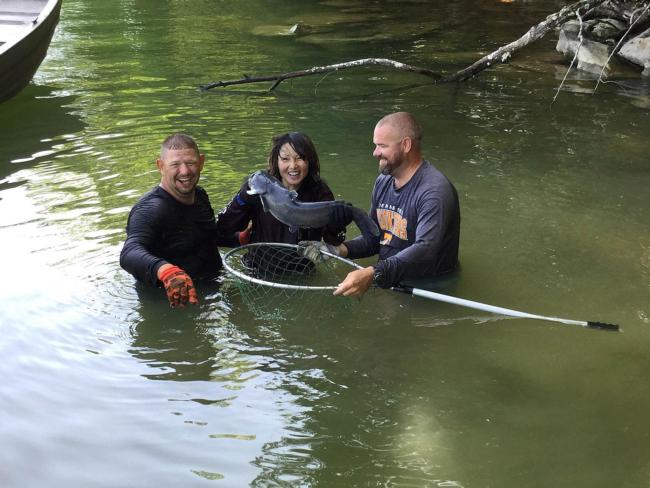 Miyu, Shin’s wife, was more enthusiastic about the enterprise. After she noodled up 10-pound blue, she was ready for another round, says Strader.

“Miyu got into it pretty good,” says Strader, who lives at Spring City, Tenn. “Once she caught that first one, she wanted to go again. The second time, she caught about a 25-pound cat. She’s a natch’l-born noodler.” 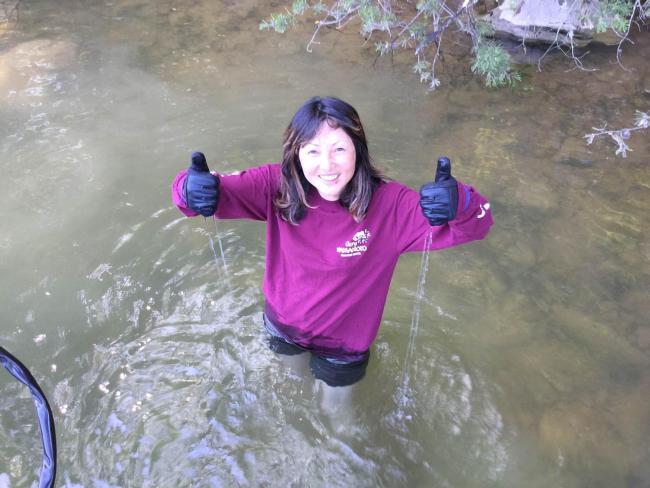