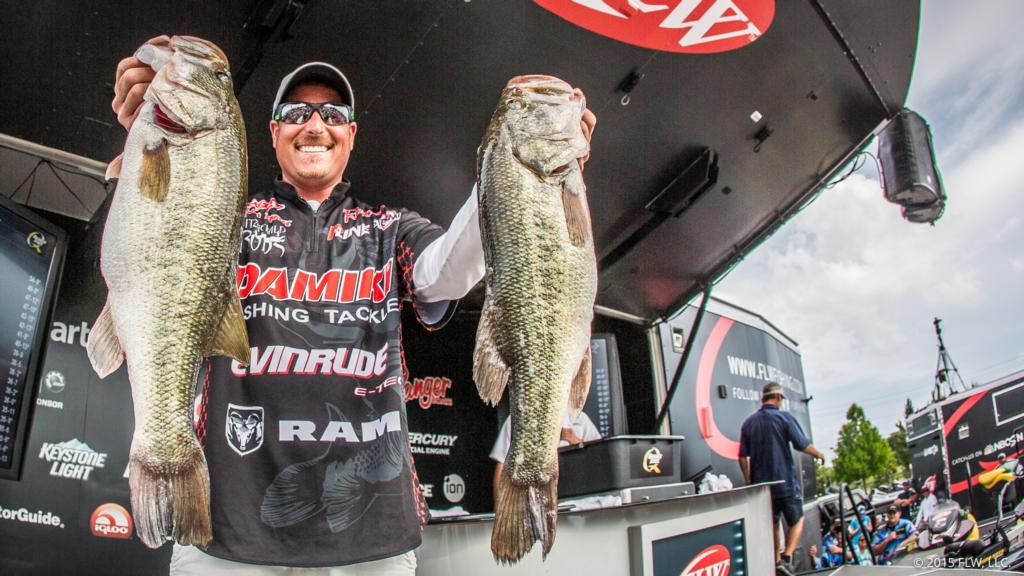 Regardless of locale or how challenging the fishing might be, Bryan Thrift of North Carolina always seems to be in contention for a tournament title. Photo by Shane Durrance. Angler: Bryan Thrift.
June 22, 2015 • David A. Brown • Angler News

Bryan Thrift can’t say for certain what baits will sit on his front deck during the final Walmart FLW Tour event of 2015 on the Potomac River, which is set to kick off this Thursday, but he’s quick to say what will not join him – the memory of his 2010 Angler of the Year title.

It’s not that the pro from Shelby, N.C., considers the coveted distinction irrelevant. To the contrary, Thrift says that winning the points race is his primary goal for each season.

According to the numbers, Thrift could very well be on his way to a second AOY trophy. With 945 AOY points, he leads by nine points over John Cox, who’s in second place. However, even from his seat atop the 2015 standings, the ninth-year Tour pro isn’t allowing himself any indulgent distractions.

“The thought of it [this season’s AOY race] won’t sit with me at all,” Thrift chuckles. “I’m not one to try and count my chickens before they hatch. I don’t worry about something until it happens. I’m still going to go to the Potomac and practice just as hard as I can, and how things shake out is how they shake out. I don’t feel like you can plan on what you’re going to do to accomplish Angler of the Year. I think it’s just something that’s got to happen.”

Clichéd as it is, the notion of stars aligning is a sound description of the good fortune necessary for such lofty pursuits.

“To win Angler of the Year, your whole season pretty much has to go flawlessly,” he adds. “If you look at how tight the race is every year, there are four or five guys who have the best year of their careers. So to win AOY, everything has to go perfectly.” 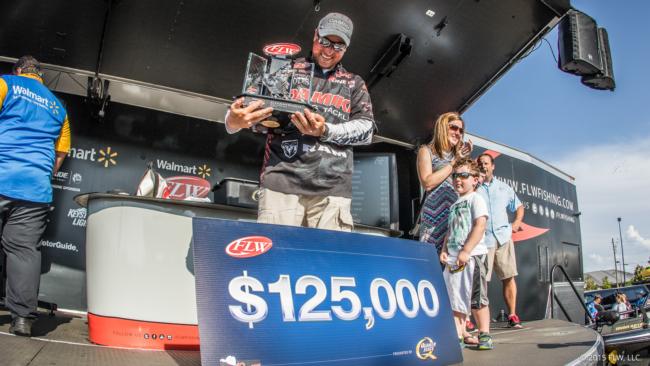 Thrift opened his season with a 21st-place finish on Lake Toho, followed with a 24th on Lewis Smith Lake. He then surged ahead with a fifth-place finish on Beaver Lake. Winning the Tour event on Lake Eufaula and then notching a third consecutive top-10 performance with a ninth on Lake Chickamauga gave him the points lead.

With 42 top-10 finishes, seven wins, eight Forrest Wood Cup appearances, the 2010 AOY and a 2007 Rookie of the Year title to his credit, Thrift is no stranger to success. However, he knows that there’s no substitute for a consistent, laser-focused work ethic.

“I can’t really describe this season. I just had three good tournaments, and I wouldn’t say I prepared any harder for those than the first two,” Thrift says. “I look forward to fishing every tournament we go to. I just go out there and practice as hard as I can and see how it shakes out. There’s no rhyme or reason to it. I take every tournament as it comes, and I don’t think about the next one until the current event is over. That’s why I really don’t like back-to-back events, because I need three or four days to clear my head of the previous event so I can start focusing on the next one.”

That being said, Thrift also knows that victory is often one right move away. Case in point – a highlight reel memory from Chickamauga. Thrift spent most of his time offshore, but on day two, something drew him shoreward, and it put him in contention for the win and earned him a top-10 finish.

“I was fishing a brush pile, and there was pocket about 100 yards from me. Something just felt right, and I thought, ‘You need to go in that pocket and throw a frog,’” he recalls. “It was a little pocket that you could cover with one cast. I idled over there, put the Power-Poles down and without moving the boat, I caught a 4-pounder and two 3s out of that pocket. You can make 100 decisions in a day, but it only takes five good ones to make you look like a genius.” 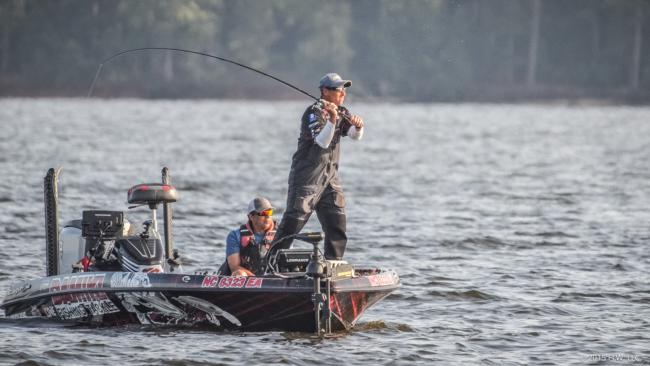 Thrift admits that the Potomac isn’t his favorite fishery, but he says he’s given no thought to how this event could open the door for his competitors.

“Rivers are my most hated places to fish, and tidal waters are my second most hated,” Thrift says of the contentious combination of mostly straight banks and fluctuating water. “But I don’t worry about what anyone might do in the tournament. I just have to catch the most I can catch.”

That’s the perspective that helps him maintain an even keel. It’s what has helped him earn seven straight top-10 finishes in the yearlong AOY standings.

So, what would a second AOY title mean to Thrift?

“To look at the other guys on Tour and how good they are, to win Angler of the Year again would be great,” Thrift says. “The $100,000 prize would be great too. This is my job – I gotta get paid!”