The reigning AOY talks about his season, Cup dreams and fishing for fun 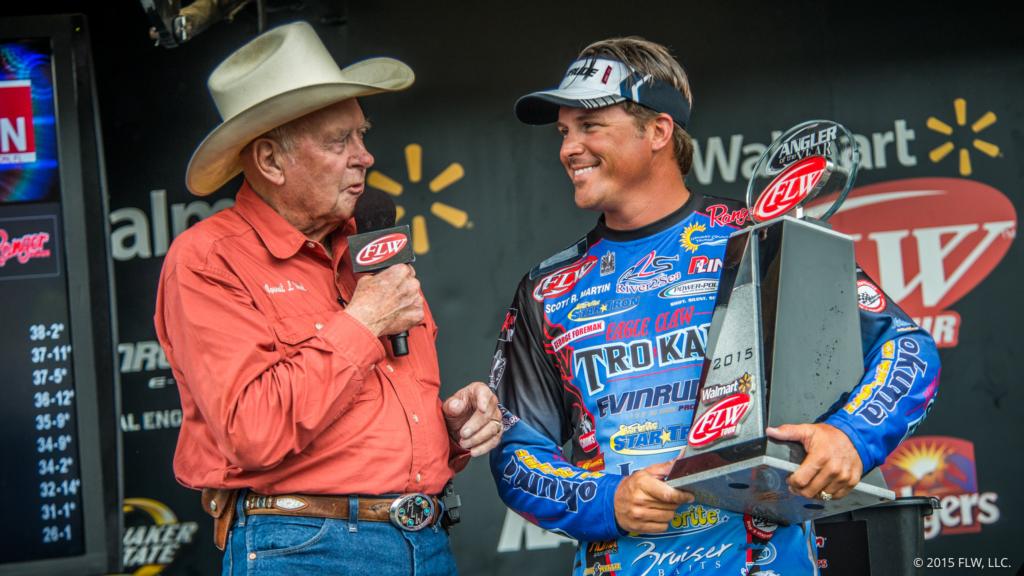 Scott Martin basically called his shot at winning the Walmart FLW Tour Angler of the Year title. After giving him some time to soak it all in and relax, and with the Forrest Wood Cup, which is hosted by Visit Hot Springs and the Arkansas Department of Parks and Tourism, on the horizon, it seemed like a good time to throw a few questions his way. In the following nine questions, Martin gives some insight into winning the AOY, a possible chance at his second Cup and what he does to relax.

You said at the beginning of the season that you wanted to win the AOY. You’ve always been a guy that goes for the win – not necessarily consistency – so what did you change from past seasons to now?

I am a firm believer that if you believe something will happen there is a better chance you’ll accomplish that goal. Secondly, I fished more consistently than I normally do. Before I would usually have some 40th- or 50th-place finishes and maybe win one. Every year until this year I’d tell my wife that I knew I was going to win a tournament, I just didn’t know which one. So this year I knew I had to make top 20s and not take the tournament-winning risks I normally would.

Now that you have a taste of an AOY title can we expect to see you hoisting that trophy a few more times throughout your career?

Was there ever a time this season where you thought to yourself that you might be completely out of the running for the title?

Definitely after Toho I was worried. I had a decent bag on day one and on the second day I made good decisions and fished well, but I lost an 8-pounder right next to the boat. I wound up finishing 44th and that got me really worried. I figured I would come out of Florida with a top-10 finish or so to give me some cushion for say, a Beaver Lake. Fortunately I didn’t have to worry about that big one at Toho, but it did haunt me all year.

Do you have any big plans to celebrate finally putting your hands on an AOY title?

You know I didn’t really do anything after winning. My wife and parents surprised me at the weigh-in on the Potomac so we went out to dinner and I spent some time with them. After ICAST I’ve been on a little vacation with the family and doing some saltwater fishing. I don’t want to exhale too much because the season isn’t over yet. After the Cup I’ll fully exhale and relax.

You’re a busy man outside of the FLW Tour with your TV show, so what do you like to do when you’re not working?

First and foremost I like to spend time with my wife and four children. It’s hard for them to travel around on Tour with me, so I spend most of the season solo. One of my favorite things to do is saltwater fish. I don’t hardly bass fish for fun anymore. I love chasing fish around offshore. It’s funny because I have a stereo in my bass boat and I never use it because that is my office. But when I get on my saltwater boat I have music going and I’m just having a good time catching fish.

Having won both the Cup and AOY, which title means more to you?

The Cup is more special to me for a lot of reasons. There are family connections to the Cup that mean a lot. And the fact that my dad never won a championship throughout his amazing career makes it special to have one. It’s very dear to my heart.

Having said that, it is a lot tougher to win the AOY.

Money aside, heading into 2016 would you rather win back-to-back AOYs or your second Cup?

Winning is more or less in your blood and your career has shown that. Have you started to think about your chances to become the first two-time Forrest Wood Cup champion? And what would it mean to do it on the lake that gave you your first Cup win?

To win two Cups on any lake would be cool, but if I had my choice it would be epic to win again on Ouachita.

The angling community can be a very superstitious bunch. Do you have any superstitions or rituals you have when it comes to fishing?

No, I don’t have any superstitions. One thing I do enjoy doing and I do a lot is pray. Before, after or even during a tournament I’ll take time to stop and say a prayer.