Getting to Know the Champ

A day or so with Brad Knight in east Tennessee 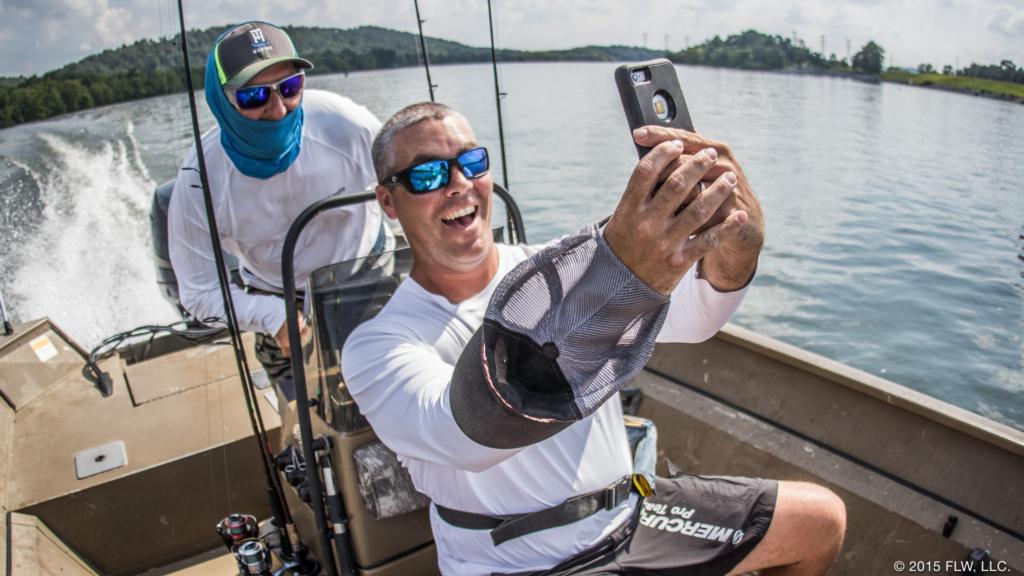 There are a few different types of Forrest Wood Cup champions. Sometimes an established pro like Anthony Gagliardi or Scott Martin wins. The Cup serves as a brilliant spot on their resumes and sets them up for life, but it likely doesn’t change anyone’s opinion about them because we already know they’re great.

On occasion, the winner fails to follow it up with more brilliance. For instance, Kevin Hawk and Michael Bennett might again perform at the highest level but haven’t thus far.

Perhaps the best champion of all is the one who uses the win to take his career to the next level and follows with more brilliance. Jacob Wheeler, Luke Clausen and Brent Ehrler are examples that every fishing fan knows so well. They won the Cup early in their careers then followed it up with great success.

When I roll up to Brad Knight’s home in Lancing, Tenn., for a visit, I almost immediately get a look at why Knight might be that third kind of Forrest Wood Cup champion – the kind who keeps the hammer down for a long time to come.

He gives me a quick tour of the house. He’s still putting the finishing touches on a fair-sized place that he and his wife, Becky, bought about a year ago when it was in foreclosure. The place still needs some doorknobs and trim around the lights in the ceiling, but it has the essentials – a theater-sized TV for Vols games, a neat kitchen, a Big Green Egg for grilling, and a home for the boat and tackle. The tour is quick, because it is mostly a walk to the tackle room and boat garage. Therein, Knight grabs a Coke out of his fridge and shows me around his tackle collection. Eventually we get sidetracked on swimbaits, a subject that he is an expert on and that I’m a nut about.

One thing leads to another, and in minutes we’re heading to test a new swimbait in his parents’ pool. We travel down past the Emory River, where Knight got the best swimbait bite of his life from a member of the only natively reproducing population of muskies in Tennessee, past the Wartburg Pharmacy (displaying a celebratory banner) where Knight started working in his teens, to a pool that has had literally thousands of swimbaits and homemade crankbaits swim through it.

Knight casts his newest acquisition then shows me how the perfectly level fall and smooth glide of Roman Made swimbaits sets them apart. We also duck into the side of the garage that housed his tackle in Knight’s younger days. Next to a mix of dusted and rusted garden tools and the other things that typically collect in a lived-in house is a pegboard with fading labels printed with words like “Brush Hog” and “Trick Worm,” and a “Team Bullet” slogan. Though the pegs and plastics are gone, it still serves as a reminder of how far the Tennessee pro has come. 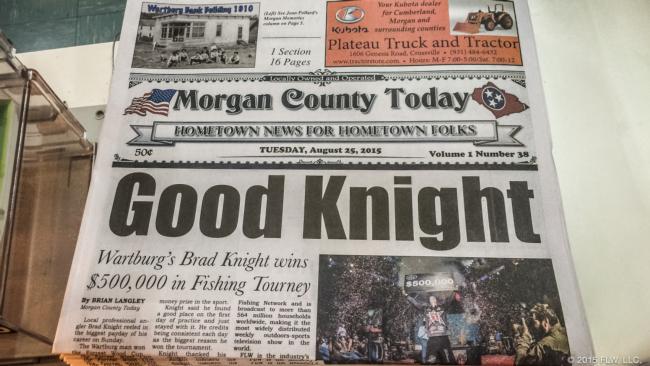 The next morning we stop for biscuits at a gas station (Knight favors bacon, egg and cheese) where a stack of the weekly newspaper Morgan County Today rests on the counter. The top cover is emblazoned with the headline “Good Knight” and his photo. While in line one of the other patrons stops Knight to shake his hand and offer congratulations – the first of many throughout the day. Knight is used to it by now. He received a police escort into town on his return from Lake Ouachita and was welcomed back by multiple TV stations and hundreds of fans and friends.

“It is amazing,” says Knight of being welcomed home in such style. “It is really humbling. I feel like I won for everyone here, not just me.” 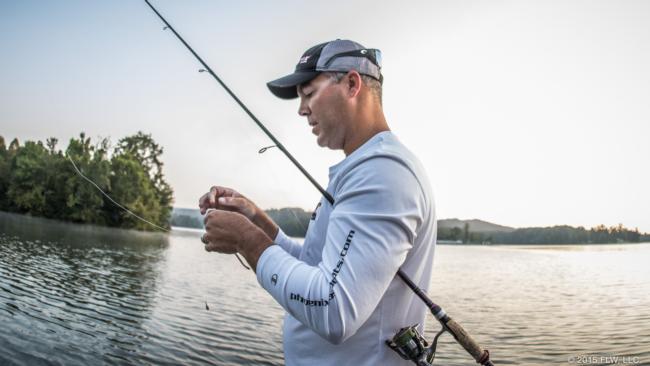 “This is like a dream,” Knight mentions as he flicks his drop-shot rig out to a piece of brush. We’re in a pocket next to the same Watts Bar boat ramp where he’s fished in hundreds of club tournaments and Tuesday night dogfights. “If you told me back then I would win the Forrest Wood Cup I wouldn’t have believed you.”

Back then, Knight was trying to make a bit of money and find a new outlet to compete in after graduating high school and leaving football behind. He was so eaten up with fishing that he might fish four tournaments in a weekend. The first would be Friday night. Then he’d take a catnap and fish another Saturday morning before doing the whole process again a few hours later. Then the week started with Knight dragging his butt to class at Roane State Community College or to work at the pharmacy.

“If I had a good weekend with maybe a win and a second and big fish I might make $500,” explains Knight. “I could make more in a couple nights than I would all week at the pharmacy. That was a real eye-opener for me.”

While Knight was making some money bassing, he didn’t exactly make the safe financial decision when he decided to take a pass on pharmacy school in Atlanta after he finished his undergrad to instead try his hand at fishing for a living. Of course, Knight has won more money catching bass than anyone else in 2015, so it seems to be working out pretty well at this point. 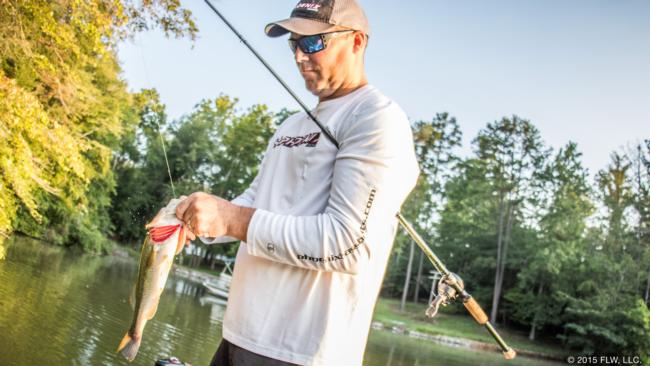 Knight’s decision-making is spot-on this morning. Midway through one cove he pulls out a frog because, he says, the water is higher than he expected. He busts one from a bush on about his fifth cast. Then he jumps off a smallmouth on a Sweet Beaver that he flipped into a pine tree.

The next stop comes after a quick run farther up Caney Creek. It pays off with a few keepers almost immediately. Whether it’s luck, local knowledge or plain skill, Knight has it going on for a few hours in the morning.

After killing my phone battery on a marathon Periscope session (follow us @flwfishing), Knight shows me one of the spots that held the potential winning fish for this year’s Walmart FLW Tour event on Chickamauga, the next lake on the Tennessee River chain. He was locking through during the tournament, and says he’d give almost anything to have made it through the lock on day two, when several barges had traffic blocked off. We tool around the lake a bit more to see some UT landmarks, then pull up to one dock where Knight calls his shot on a keeper. 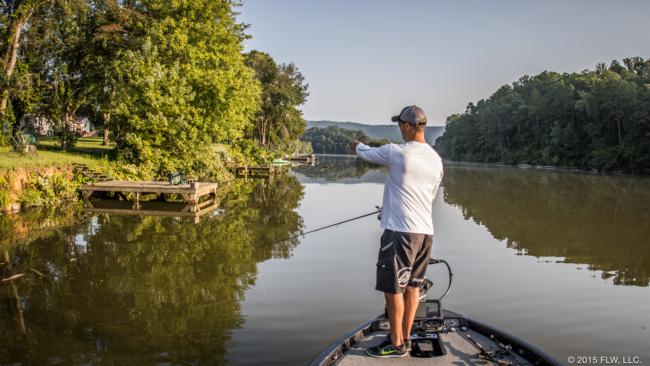 While we putter around the lake, Knight reflects on his chances to keep winning. Even though he feels a bit guilty about wanting more, he says he’s now addicted to the rush of championships. In fact, he’s already got his eye on next year at Wheeler Lake.

“I like it a lot,” says Knight. “I’ve got a good record on the Tennessee River all through the year, not just for ledge events. Growing up, all the team championships were in late summer like the Cup. I’m good at fishing shallow when the river is tough.”

Of course, our success couldn’t continue at the same rate as it did in the morning. The slowing bite is the cue to get some specific filming done before getting off the water for lunch and to meet Wesley Strader for some striper fishing below the Watts Bar Dam.

Knight does a phone interview (surprisingly, the first of the day) while we wait for Strader to return from a planning meeting for the NoogaStrong event.

“I still can hardly believe I was the one to win the Cup,” reflects Knight. “I used to swing a U-turn just to go in and see him [Strader] if I saw that Fujifilm wrap at a tackle store. He was my idol growing up, and now here we are.”

On the way to pick up an aluminum boat to use below the dam (Strader knows seemingly everyone in east Tennessee), Knight breaks down his whole tournament for probably the thousandth time. This time, he does it in more detail and with plenty of input from Strader.

Midway through, Knight realizes that Strader’s FLW Tour win had also come on Lake Ouachita back in 2002, and the pair shares a high-five. Sitting in the back of Strader’s truck with a larger-than-life Wesley head grinning at me from his truck wrap on both windows, I realize how cool it is that a Tennessee legend and a Forrest Wood Cup champ can still sound just like two buddies breaking down a club event. 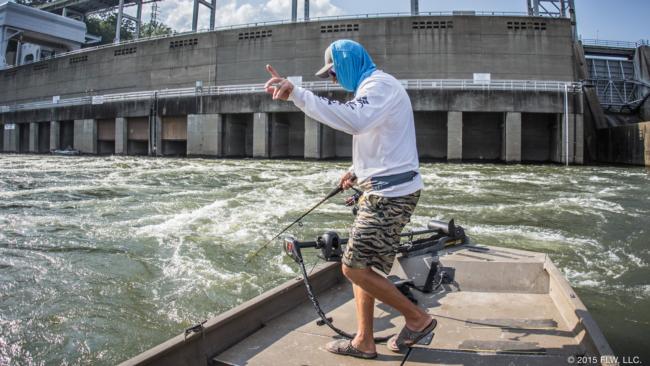 The Tennessee River below the dam is churning when we get there, but Strader knows exactly what to do. He expertly pilots the aluminum center-console boat to right below the dam and breaks out the striper gear. We spend the rest of the afternoon bouncing around in the heavy current and getting tired out by surging stripers. It’s some of the most fun I’ve had, and if Strader ever decides to quit fishing for bass he should consider a second career as a striper guide. 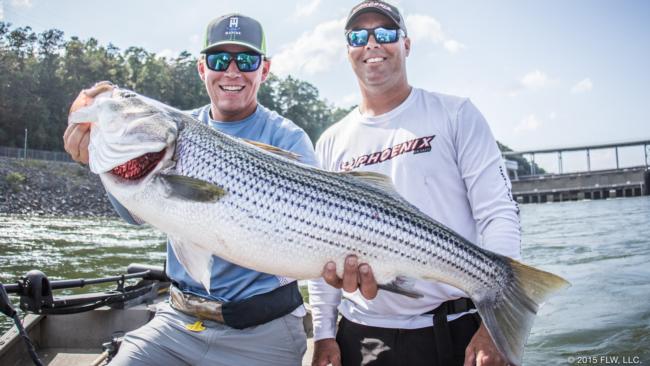 By the time we get off the water, Knight is good and exhausted. Being the Forrest Wood Cup champion will take a toll on anyone. And having to be constantly on and managing the media and fan attention, in addition to having fished the most stressful tournament of his life just a few days ago, has left Knight at less than 100 percent. Nonetheless, Knight, Strader and I close out the night with pizza, Coke and sweet tea until almost 11 o’clock.

I’d planned on leaving Friday evening, but that obviously isn’t happening. So, Saturday morning, after Knight completes a live radio show in his pajamas, I get a good look at his tournament system. From the camper he and Becky and their daughter, Tinsley, live in on the road to the garage where he stores his boat, everything is dialed in. There’s a plastic tub positioned exactly on the floor of the garage to catch water from the bilge. His Power-Poles slip just inches under the door. Each tackle box is meticulously organized.

“I don’t think I’ve been to a tackle store at a tournament more than once or twice in the last three years,” explains Knight. “I bring spares of almost everything I need.” 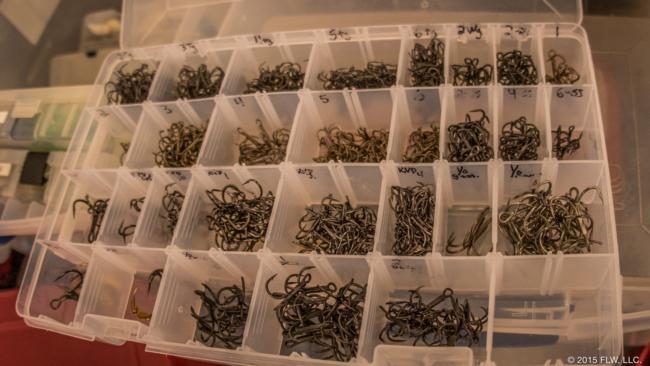 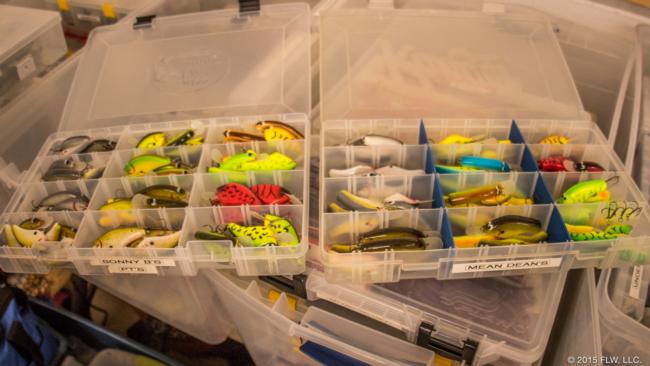 Indeed he does. From box after box filled with crankbaits he has made and painted himself (each organized by color; shad in the top left, firetiger in the bottom right) to a painstakingly labeled box of trebles for every situation, Knight is prepared for everything. He’s got enough line organized by diameter for about three years, maps filed alphabetically and spare plastics in 100-count bags sorted by color.

On the whole, his storage system is a reflection of his fishing style. Not that Knight lacks creativity or instinct, but he has a prescription for most every situation that he has arrived at by painstaking experimentation and time on the water.

The level of organization Knight has achieved doesn’t come easy. By filling spare minutes at the pharmacy with constant Internet research and spending tons of time actually making and painting baits, Knight has a closer relationship with his tackle than most. It was key for him at the Cup, where one of his handmade crankbaits picked up several crucial fish, and where he barely lost any while fishing a drop-shot around gnarly wood. 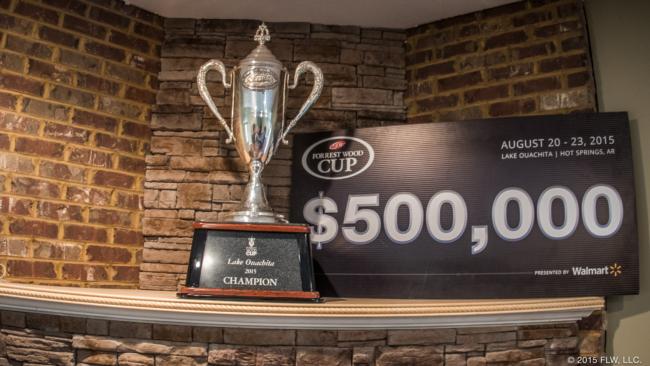 Most every pro has worked harder at fishing than any of the countless wannabes, and Knight is no different. He might not think he deserves the win, but from everything I’ve seen during a couple of days in the mountains of Tennessee, he absolutely does. And he’s not going to stop. The Knight Train is set to keep rolling for a long time to come.