A golden anniversary for one of tournament fishing’s pioneers 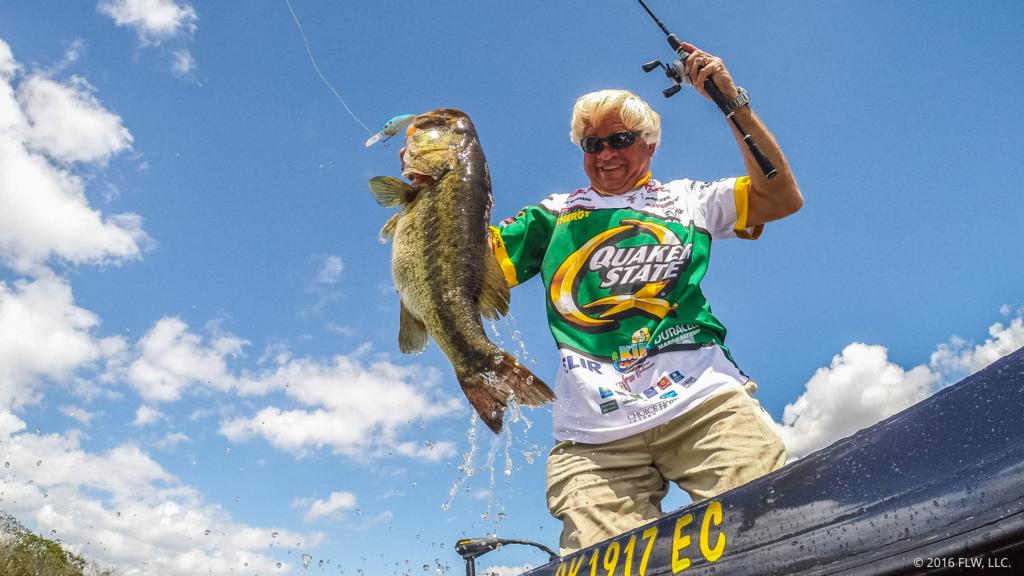 (Editor’s Note: In commemoration of Jimmy Houston’s 50 years as a tournament fisherman, Tommy Pike Customs of Greenville, S.C., in conjunction with Quaker State, is customizing a 2015 RAM 1500 that will be on display at 2016 Walmart FLW Tour events and will eventually be raffled off to a lucky fishing fan. The truck will be tricked out on site at the South Carolina International Auto Show in Greenville Saturday and Sunday, Jan. 16-17. Houston will be on hand at the Tommy Pike Customs show space Saturday from 1 to 5 p.m., and fellow Quaker State team angler Matt Arey will be there Sunday from 1 to 5 p.m. to visit with fans. For additional information, follow @TommyPikeCustoms, @QuakerState and @FLWFishing on Twitter. The South Carolina International Auto Show also can provide information about the show schedule.)

The year that Jimmy Houston first fished a bass tournament of any consequence, he was a senior at Northeastern State University in Oklahoma and contemplating going to law school after graduation. In the larger world outside, U.S. President Lyndon Johnson was contemplating sending more American troops to a distant spot on the map called Vietnam to help resolve a conflict there. Teenage girls were contemplating whether to purchase the new fashion sensation called a “mini-skirt” and what their parents might say about it, and millions of young married couples were contemplating whether they could afford the median sales price of $21,700 to buy a new house.

The year was 1966, and however the other issues were resolved, Houston didn’t become a lawyer. Instead, he entered some bass tournaments and discovered that he had a talent for the fledgling sport. The revelation came to the Oklahoma angler after he qualified for a tournament called the World Series of Sport Fishing Championship, an annual event started six years earlier by former Sports Illustrated photographer Hy Peskin.

The World Series’ rules were simple. Anglers had to finish high enough in sanctioned state championships to qualify for it. In Houston’s case, that meant winning the Oklahoma State Championship, which he earned with a pair of victories on Fort Gibson and Keystone lakes over some of the state’s best anglers.

Of course, though Houston lacked experience, in a way he had more of it than many veteran bass fishermen. His father, Jack, had purchased a resort on Tenkiller, and, as a teenager, Jimmy grew up guiding and fishing every chance he got. In 1962, when Virgil Ward of Missouri won the World Series of Sport Fishing Championship on Tenkiller, Jimmy met him and eventually got to fish with him. Other greats, including Glen Andrews of Arkansas, passed through, and Jimmy gleaned important knowledge about bass and fishing from all of them. 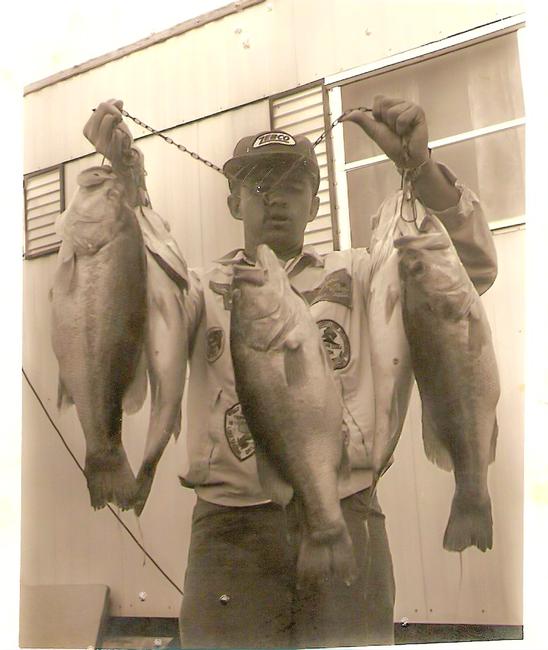 A Half-Century of Learning

Much is known about Houston’s tournament career with B.A.S.S. and, later, FLW, but those shadowed years when tournament fishing was first emerging marked his formative years as well.

Fifty years ago, nobody knew how to be a professional fisherman. There was no job description, no well-worn paths to follow, no examples to point the way. Careers began in fits and starts, and some ended aborning. Young fishermen followed leads and hunches and did what they thought best for them. Some took wrong courses, and others, like Houston, nailed it without knowing it.

“Everything about tournament fishing was new when I started,” says the 71-year-old Houston. “You didn’t think about a lot of things that are standard operating procedure now. There were just a few rod and reel companies and lure companies. There weren’t any sponsors – or at least not at first. You were strictly on your own.”

Houston funded his early forays into tournament fishing with income from the insurance agency that he and wife, Chris, owned. Houston wound up in 18th place in that 1966 World Series championship, and it gained him recognition that would serve him well in later years. Though Peskin, who was born of Russian immigrants in Brooklyn, might be considered the first entrepreneur to popularize freshwater tournaments, he didn’t have the personality or the will to sustain what he had set in motion.

Jimmy and Chris started fishing tournaments together and did well in them, though not well enough to consider fishing for a living. Eventually, Chris became a great tournament champion in her own right – as a star in the Bass’n Gal circuit – while Jimmy’s tournament path veered in a different direction.

In 1967, when Jimmy was still considering his future options, Ray Scott held his first tournament on Beaver Lake in Arkansas, and a new paradigm was established. Jimmy didn’t fish in that inaugural event, but by 1968 he was fully immersed in the new tournament circuit. Though he didn’t win an event until 1976 (at Santee Cooper), he placed high enough in other events to catch the attention of movers and shakers in the burgeoning sport. Forrest and Nina Wood of Ranger Boats befriended the youngster from Tahlequah early on, and he became one of the first to join their blue-ribbon assemblage of pros, just behind Mary Ann Colbert (who later became Mary Ann Martin, wife of Roland and mother of Scott) in the pecking order. 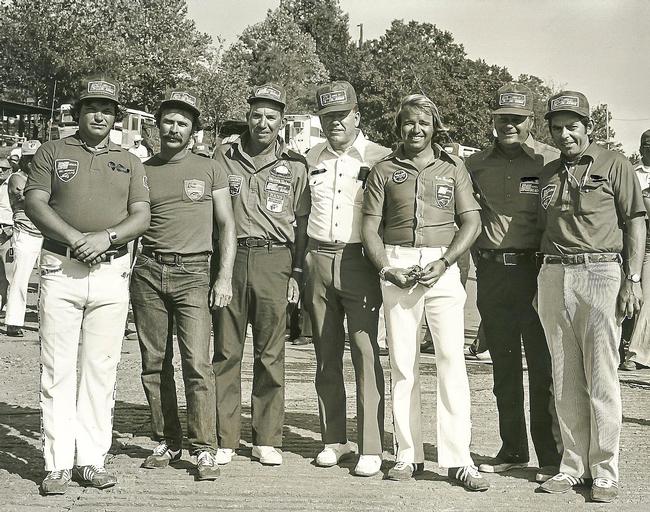 Before Claude “Fish” Fishburne, before Gerald Swindle, before Wes Strader, Houston was the original “clown prince of bass fishing,” whose affable disposition and wisecracking ways always won over crowds and, in turn, attracted the attention of companies who wanted Houston’s jumpsuit to sport their logo patches at weigh-ins.

“We’re talking about a time when there were no livewells in boats, no catch-and-release, no flipping or pitching, no electronics other than Carl Lowrance’s ‘little green box’ flasher,” says Houston of tournament fishing’s infancy. “We didn’t realize it at the time, but those guys I met when I was a teenager and later when I got into tournament fishing were the real pioneers – the Larry Nixons and Andy Morgans of their day.”

A half-century later, Houston is proud to count himself in that number and, like a few others such as Roland Martin and Bill Dance who still have a commanding presence in the fishing world, revels in the fact that he played a major role in the nascent days of the sport. Although he rarely is considered a tournament threat nowadays, there was an era when he ran with the pack that usually dominated an event: Bill Dance, Roland Martin, Carl Dyess, Don Butler, John Powell, Rick Clunn, Larry Nixon, Hank Parker and Tommy Martin among them.

In 1976, Houston topped that first generation of tournament pros by winning Angler of the Year. In 1986, when the second generation of pros such as Denny Brauer, Guido Hibdon, Ken Cook and Gary Klein had joined the field, he won AOY again. 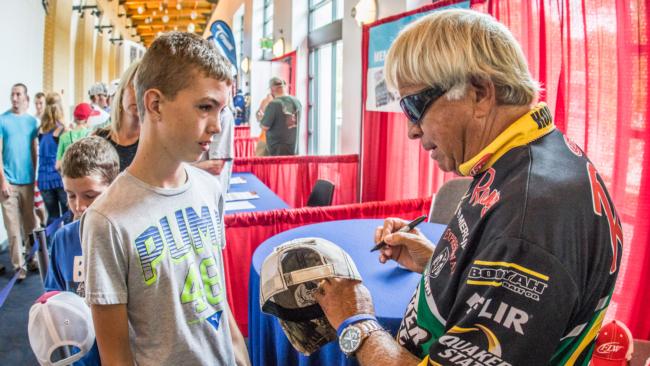 “It’s pretty cool when you think about it – pretty amazing,” observes Houston of his long career. “I’ve got a lot to be grateful for: my family [wife Chris, son Jamie and daughter Sherri], the fact that I’ve had a television show for 39 years [Jimmy Houston Outdoors], that I’ve helped grow the sport from the get-go and that I’ve made a lot of great friends on and off the water through the years.

“Another thing that’s very gratifying to me is that most of the young people that I talk to at tournaments really appreciate the history of the sport and how we got where we are today. That tells me we’ve got a good future.”

And what about Houston’s future? His buoyant personality aside, Houston isn’t as spry as he was in the days when he shared a boat with the likes of Virgil Ward and Glen Andrews. The free-spirited attitude, the trademark cackle and buddy-next-door demeanor are still there, but the rigors of a half-century of tournament fishing have taken their toll.

“I probably need to quit tournaments ­– people have been telling me that for years,” muses Houston. “I’m in good shape today, but we’ll have to see about tomorrow. After 50 years you’d think it would be a great time to quit, but I’m not ready to say I’m going to do that.”

Just as well. Several thousand fans wouldn’t want him to. 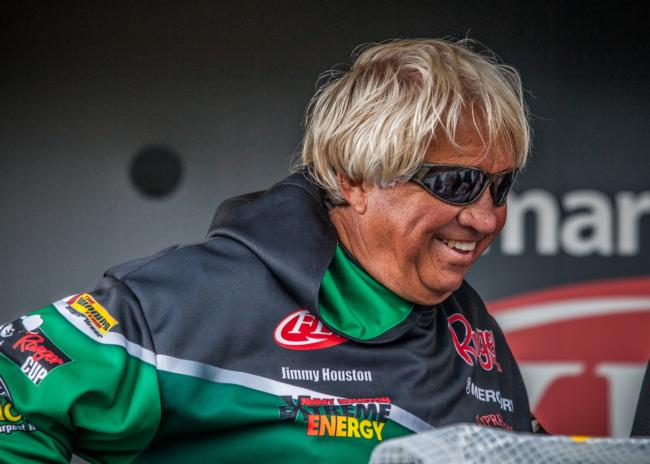