A Morning with Wesley Strader on Watts Bar Lake 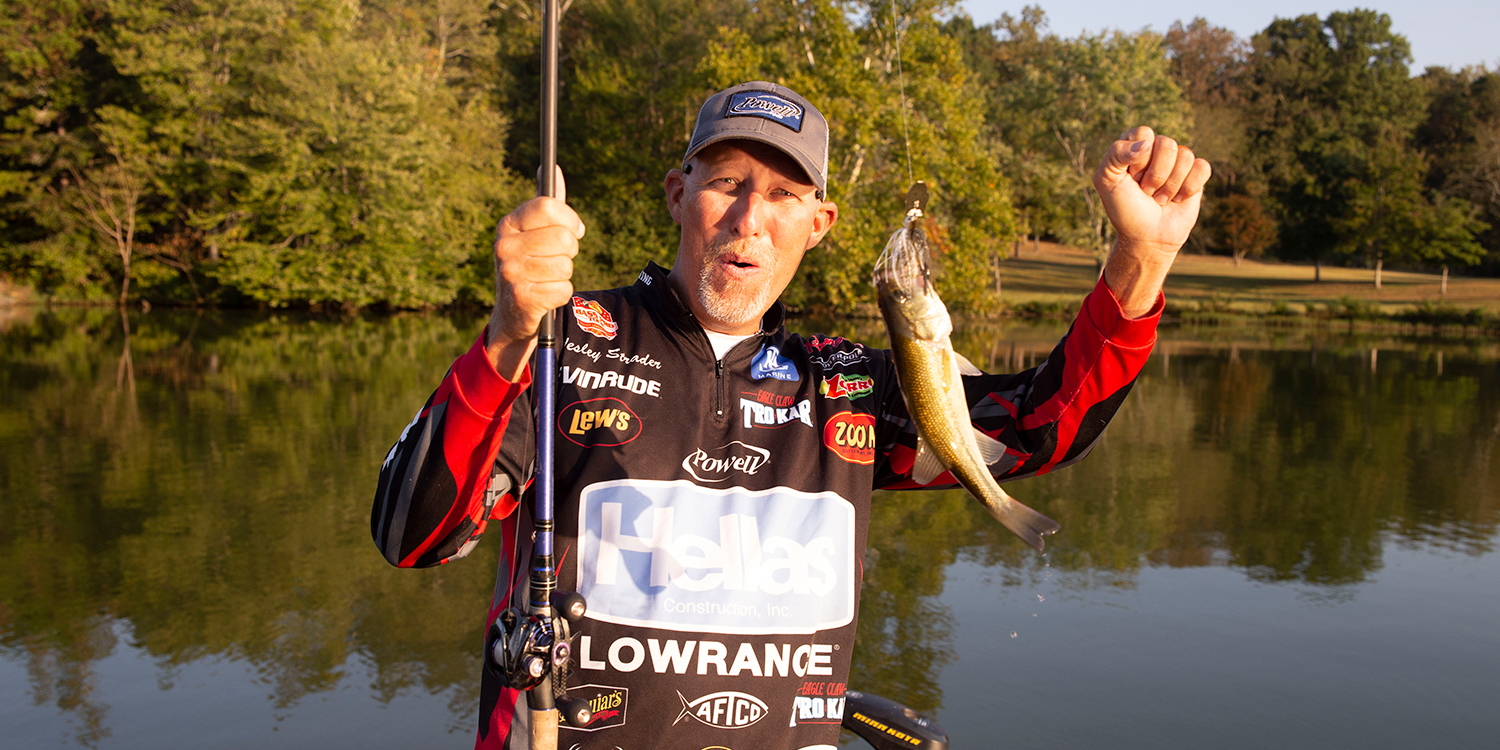 Tales from a morning spent with Wesley Strader on his home lake of Watts Bar Reservoir. Photo by Mason Prince

WATTS BAR, Tenn. – After feasting on a boil of Gulf shrimp, sausage, corn and potatoes provided by Brandon Coulter the night before, Wesley Strader and I are well rested before our excursion on Watts Bar Lake in east Tennessee. Strader grew up fishing on Watts Bar and had plenty of stories to tell and knowledge to share about the reservoir, which is the reservoir above Lake Chickamauga on the Tennessee River.

7:15 a.m. ET – I meet Strader on a dock just outside of his buddy Coulter’s house. The weather is beautiful with not a cloud in the sky as we prepare for a morning of fishing. Strader feels confident that he’ll have success today. “I caught a 4-pounder here yesterday, so I have some good spots in mind,” he boasts.

8:00 a.m. ET – With not much luck on our first stop, we make the move to a spot with a little bit of sentimental value for Strader. He pulls up to a point along the bank and says that this is where he caught his first fish, a 2-pound, 6-ounce bass that his dad had mounted for him when he was just a kid. He says the lake has changed a lot since then.

8:11 a.m. ET – Strader begins to tell me how the Tennessee Valley Authority killed off a lot of the hydrilla in the 1990s, causing the fishing to take a serious hit. The Tennessee native recalls swimming in the lake as a teenager and watching the TVA dump grass-killing chemicals into the water. It’s been almost 30 years since then, and Strader says that Watts Bar is finally starting to come back as one of the best fishing lakes in the state.

8:45 a.m. ET – It takes a little while but we finally have our first fish of the day. Strader has switched up to a vibrating jig to catch this bass, but it doesn’t look to be scoreable. “I don’t really care how big he was, I’m just excited to get a bite,” Strader jokes.

9:30 a.m. ET – Still working the vibrating jig, Strader sets the hook and exclaims, “Oh I got a big one!” I step toward the front of the boat to get a picture. As the line gets shorter and the fight gets tougher, Strader begins to think he doesn’t have a largemouth on the other end of that line. “It’s got to be a drum,” he sighs. He’s right.

9:47 a.m. ET – After using a buzzbait or a vibrating jig all morning, Strader reaches for something else as he spies some schooling shad near the surface. He quickly ties on a PH Custom Lures P1 crankbait and casts near the boiling shad. Sadly, no luck. He says that he made the quick change because he had missed one on his vibrating jig and he believed that with more hooks on the crankbait, he would have a better shot at getting one hooked.

10:11 a.m. ET – Strader works his way around some boat docks. “I saw some minnows underneath this dock,” he says. “Docks are great this time of year because they provide shade for the minnows and the bass just love to hang out there.” He picks up his 4 1/4-inch green pumpkin Zoom Salty Super Tube to pitch in between the submerged wooden planks.

10:49 a.m. ET – Our time and luck are beginning to run out. We’re scheduled to head back in at 11 and so far all we’ve gotten are a small bass and a drum, or “vermin of the shallows” as Strader so affectionately puts it. He’d confounded as to why he hasn’t gotten many bites today. As we prepare to head back to the dock, Strader tells me even after a rough day, his confidence in Watts Bar never waivers.

“I don’t think, I know that Watts Bar Lake is about to be the new Lake Chickamauga in about five years,” Strader predicts. “The combination of the grass coming back that was killed off 30 years ago, plus the influx of Florida strain largemouths will make Watts Bar a go-to lake in Tennessee. I can’t wait to see what the future holds for it. Maybe we’ll see an MLF event here one day.”