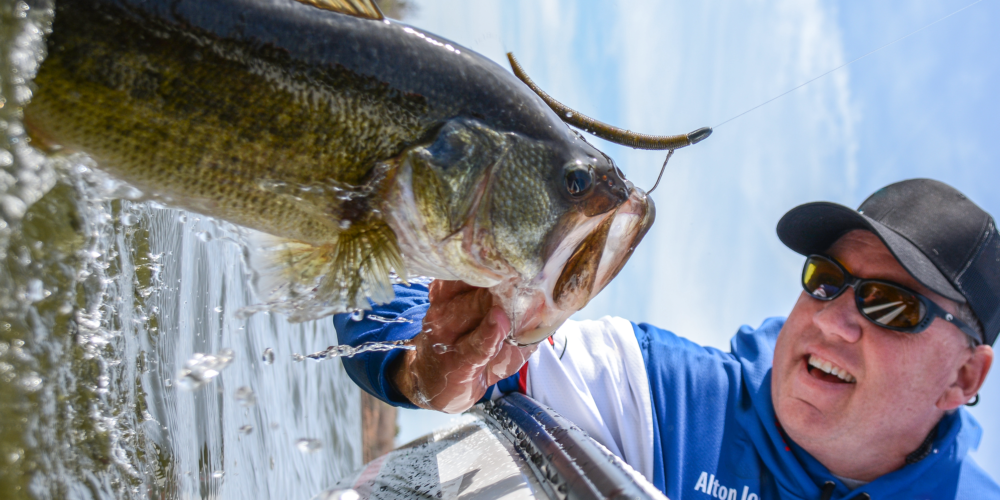 Winter fishing is very different, depending on where you live. You may be dealing with arctic conditions and drilling holes through the ice to catch perch, traveling to a tropical climate to escape the cold and catch dorado, or if you’re fortunate enough to live in Texas like Alton Jones, you stay in your home state and rip lips on big bass.

“I really love fishing during the winter months in Texas,” Jones confessed. “There are other great places in the USA to visit, like lakes in southern Florida, but Texas lakes have been very good to me during the coldest part of the year.”

This smaller power plant reservoir southeast of Austin has Alton jonesing with a variety of cover and fish in all stages of spawn during the winter.

“I love this power plant lake, especially in winter,” Jones said. “The hot-water discharge area and the current (counteract winter conditions). The water warms and cools around the lake based on the wind, so I don’t focus on just one area.”

Jones favors Fayette County Reservoir because of its diversity, which translates into offseason “practice” grounds.

“Due to the ever-changing conditions, this lake keeps me sharp with decision-making skills,” Jones admitted. “For example, January can see some fish spawning, some in prespawn mode, some in winter positioning, even some still in fall-type patterns.

“The lake is about 3,500 acres and has some water as deep as 80 feet. All sorts of cover like sand flats, standing timber, etc. The fish have lots of options. You can fish this lake six days in a row, and the next day you still have to figure out where they’ve gone and what to use.”

“This is not a 10-pounder lake,” Jones said. “At one time, this lake had the highest bass-per-acre numbers in Texas. It’s a great place to get bit. Don’t get me wrong, there are a lot of bigger fish there from 4 to 7 pounds, and my biggest is a 9-pounder out of Fayette County.”

Jones rigs his rods with YUM Dingers, Flash Mob Juniors, lipless crankbaits, Norman Deep Little Ns and some flipping baits like a tube or a Booyah jig for a day on Fayette County Lake.

Head south for about an hour out of Fort Worth and you’ll run into Lake Whitney on the Brazos River. This highland reservoir had its bass population killed off several years ago due to a golden algae bloom, but it’s back now, and you’ll have a good shot at an 8-pound-plus bass.

“Whitney is a typical highland reservoir: think limestone bluffs and chunk rock,” Jones said. It fishes like Table Rock, Bull Shoals in Missouri or Martin in Alabama. “It’s not crystal clear, but it’s not dirty water either. Typically, clearer lakes are better to fish in the winter than dirty, so this one is prime for cold months. Typical visibility here is about 3 feet. There is plenty of moving water and current, so the effects of the colder temps are negated.

“This is the lake I learned to fish a suspending Rogue jerkbait,” Jones said. “I’ll also fish a YUM Flash Mob here, orange or red crankbaits like a Norman Deep N or Deep Baby N. The Booyah Covert spinnerbait is also a good choice, just fish it as slow as you can while still making the blades turn. This is also the lake where I learned to finesse fish with spinning gear. I learned about finesse fishing here before Aaron Martens picked up a spinning rod.”

If he’s looking for a truly big fish, Jones said that Falcon Lake is one of those fisheries where any cast could produce your personal best bass.

“Falcon is my favorite bass fishing lake in the world,” Jones admitted. “This lake has better big fish potential than any place I go. Since it’s on the US/Mexico border it’s never really winter to the fish. But like Florida fisheries, a bad cold front can shut down the fishing.

“Spawn is really drawn out. It starts in December and ends by April.”

There’s usually no need for deep-water gear during the winter on Falcon.

“I fish Falcon shallow during the winter,” Jones said. “The fish are seldom deeper than 10 feet. Pretty simple fishing: stick with crankbaits, jigs and Carolina rigs. If the water temperatures are above 65 degrees, I fish a 6-inch YUM Dinger. Specifically, a green pumpkin with purple flake, Texas-rigged with a 1/16-ounce bullet weight. If I have four rods on my deck, three of them are rigged with YUM Dingers. That bait really entices those big bass on Falcon.”