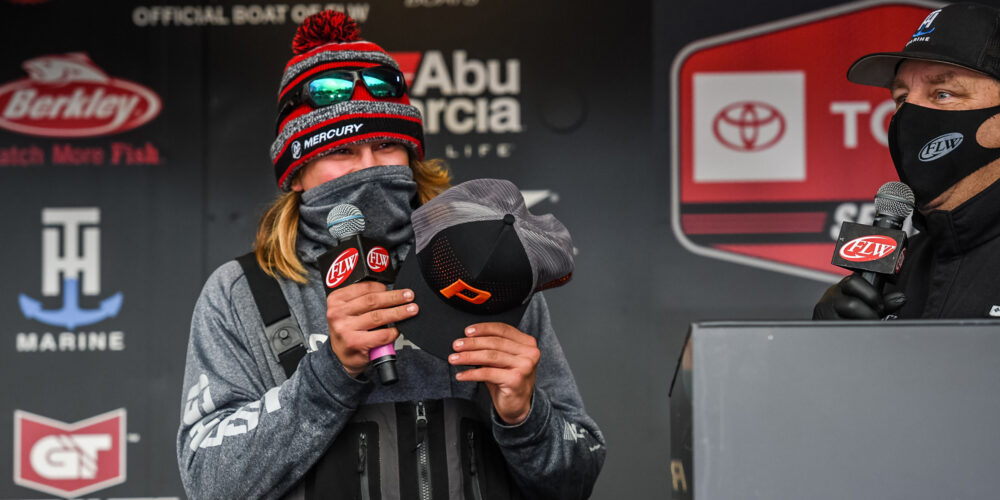 BURNSIDE, Ky. – It was a special moment for the Lane family on Thursday afternoon as Cal Lane, the oldest son of MLF pro Chris Lane, weighed in his bag after his first day of competition in the Toyota Series Championship at Lake Cumberland in Kentucky.

The 18-year-old thought he was just going onstage to find out how he did on Day 1. Instead, he and his family got to share in some news they’ll never forget.

Cal was informed onstage that he had officially received an invitation to fish in the FLW Pro Circuit in 2021. The surprise announcement was given to the recent high school graduate in front of his family, who made the trip up to Kentucky from Alabama to share in the moment.

Witnessing his son learn that his dream of being a professional fisherman had been fulfilled was obviously a special moment for Chris Lane.

“I always knew he wanted to be a professional fisherman,” Chris said of Cal. “I guess I just didn’t realize how bad he wanted it until I saw how nervous and excited he was as he waited for a call to tell him he made it in. I couldn’t be happier or prouder of him than I am at this moment.”

Fresh out of high school, Cal was an angler to watch this season in the Southeastern Division of the Toyota Series. The young Lane notched a Top-10 finish on Neely Henry Lake, which earned him enough points to qualify for the Toyota Series Championship on Cumberland.

In his first season fishing as a pro, Cal finished sixth in the Southeastern Division and compiled more than $3,000 in winnings. That success provided Lane the opportunity to fish the FLW Pro Circuit in 2021 if another angler were to decline the invitation.

As it turned it, an angler did decline an invite, opening the door for Lane to join the likes of his father and uncle, Bobby Lane, as a professional angler.

While professional fishing is in Cal’s blood, his dad makes it clear that everything Cal has gotten up to this point is thanks to Cal’s hard work.

“At 18 years old, a lot of kids have dreams of becoming a professional fisherman, (but) few make it a reality,” Chris said. “He’s put in the work. The kid graduated high school and immediately started fishing BFL’s and Toyota Series events. Everything that he’s done up to this point has been all on his own and he’s worked to get better every day. To see him grow and develop into the angler he is today is something really special.”

Cal ended Day 1 in 35th place with 10 pounds, 13 ounces and will look to move up into the Top 20 at the end of Day 2. Still, even if he doesn’t go home with a Toyota Series Championship in 2020, Chris believes that this is a weekend that Cal and the Lane family will never forget.

“I really just can’t express how happy I am for my son in this moment,” Chris expressed. “My family and I all get emotional just thinking about how big of an opportunity this is for him and one he’s worked so hard for. I truly believe he has a bright future and career ahead of him and I can’t wait to see where it goes.”