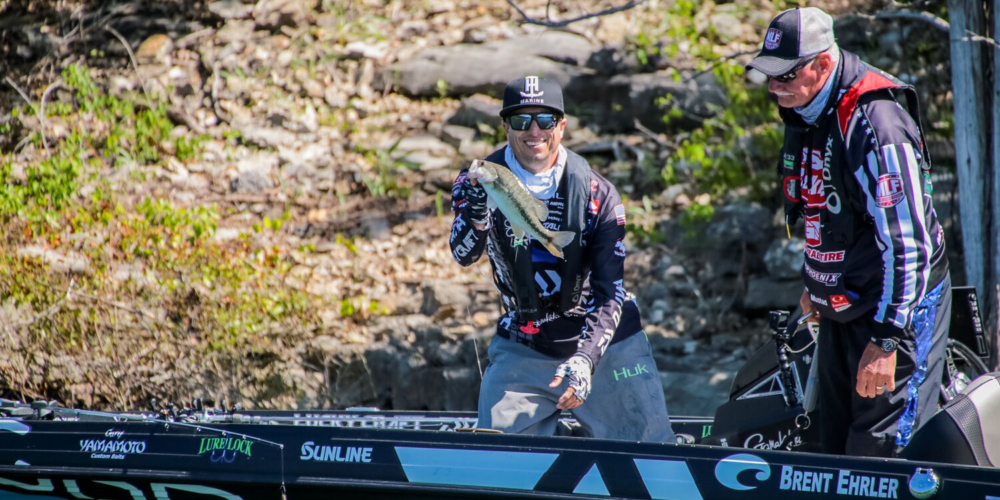 Brent Ehrler is just one of 13 MLF anglers that auctioned off an autographed jersey with the money raised going to St. Jude. Photo by Phoenix Moore
December 15, 2019 • Mason Prince • Angler News

It’s the season of giving, a time of year when people feel especially generous, and MLF pros are no exception. More than a dozen pros and one MLF NOW! analyst teamed up to raise money for St. Jude Children’s Research Hospital. The pros donated autographed jerseys that were auctioned off on eBay, with all of the proceeds benefiting St. Jude.

Brent Ehrler is one of the anglers who auctioned off an autographed jersey this past weekend. It was the California pro’s third time donating his jersey for the auction, and this year he was able to raise the most money yet: $810.

“It’s honestly the least I could do,” Ehrler said. “I look forward to doing it every year and it really is for a great cause. I can’t wait to do it again next year where hopefully I can raise even more money.”

Lambert has been involved with the jersey auction for a couple of years now. Lambert’s jersey is still available for bidding on eBay. The Tennessee pro says that he loves doing the jersey auction every year because it shows the human side of the pros.

“I think it’s awesome that so many guys are involved in something like this,” Lambert said. “It shows how much we genuinely care about other people and getting to help out in any way that we can. We have so many jerseys that it only makes sense that we donate a couple. It doesn’t take a lot of effort to try and make a difference for someone else.”

Ehrler, Lambert and the rest of the anglers were recruited by Glenn Walker, a friend and fishing buddy from Minnesota. Walker originally came up with the idea to auction off donated fishing jerseys in 2014. Walker says that with the help of the anglers, he and his team are able to increase the amount of money donated to St. Jude each year. Last year, Walker’s team of anglers raised over $11,000 thanks to the generosity of the pros.

“It just goes to show that these anglers have developed a fan following and they are using their platform for good,” Walker said. “These guys could easily just sign jerseys and auction them off for profit for themselves, but instead they are auctioning them off to help out a great cause. That just shows what kind of people they are.”

Walker says the money raised for St. Jude will be donated to the hospital at the annual St. Jude Bass Classic on Pool 4 of the Upper Mississippi River, which will take place in Wabasha, Minnesota in May 2020. Walker says that the tournament brought in $700,000 in 2018 for St. Jude, becoming one of the largest fundraisers of the year.

“I just really appreciate their help,” Walker said. “I know St. Jude appreciates our donations and we hope to continue to donate more and more every year.”

The bidding for Ehrler’s jersey may be over, but there are still plenty of opportunities to bid on the rest of the jerseys. Walker says you can visit the St. Jude Fishing eBay page to check for the latest auctions.