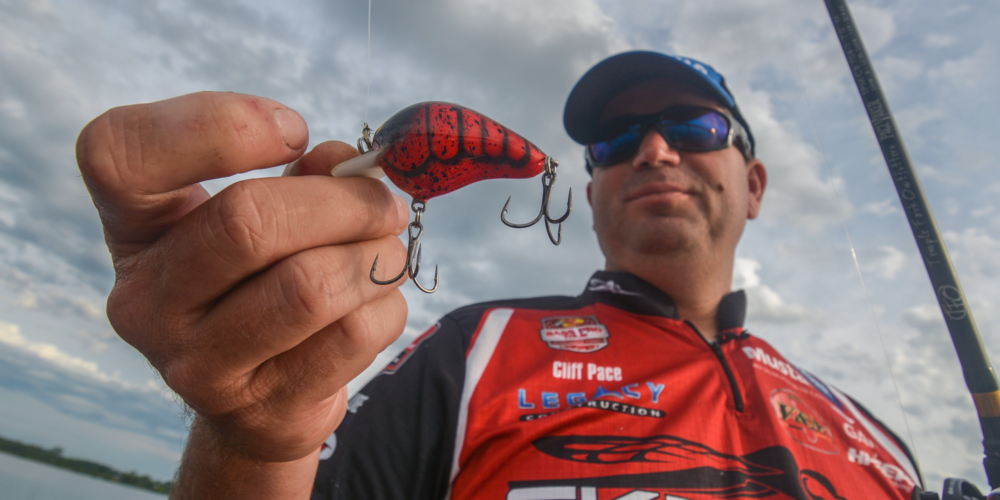 NEENAH, Wis. – A 45-pound red-and-silver champion’s trophy and $100,000 paycheck were a stout end to Cliff Pace’s 2019 Bass Pro Tour season. But the Mississippi pro’s recent win at Stage Eight in Neenah, Wisconsin was made a little sweeter because his own sweat and craftsmanship went into one of the baits that helped him to the win.

Pace piled up 81 pounds, 9 ounces in the Championship Round on Green Lake to beat Bobby Lane by 13 pounds, most of it on a Jackall Rerange jerkbait and drop-shot. But Pace wouldn’t have had the chance for those baits to do their work if not for a bait that he turned with his own hands: a Black Label Tackle Circuit Board Series 1 (CBS) Balsa in Red Craw.

Pace finished fourth in the Group B Elimination Round on Lake Winnebago with 71-3 (30-13 and 40-6 in the two rounds), weighing 51 fish. More than half of those fish (27) came on two squarebill crankbaits: a Jackall Aska in Super Crawfish and the CBS 1, a 2-inch, 5/8-ounce, 3-foot diver that’s one of roughly 5,000 to 7,500 baits that the Yamaha pro personally turns and paints every year for Black Label Tackle, which he owns.

“The fact that a bait that I built myself contributed to my win is pretty cool,” Pace admits.

The Power of Balsa

Pace fished both squarebills to isolated targets on Winnebago, cranking them along the faces of rocks and seawalls, alternating between the Aska and the CBS 1 to show the fish slightly different actions.

“The main thing about a balsa bait like the CBS 1 is that it’s more buoyant, and the baits aren’t all identical,” Pace said. “They don’t come out of a mold, and the piece of wood might be denser or softer. They just have some variation to them. They also tend to have more of a hunting action than an injection-molded plastic bait.”

“The circuit-board bill just gives the bait a different feel,” Pace said. “It has a different pull and a different vibration. It’s not a bait that I’m going to throw up into dense cover and logjams where I’d throw my Ricochet squarebill, it’s designed more for cranking isolated cover like we had on Winnebago.”

Custom Color Did the Job

“You don’t tend to fish crawfish colors, especially red, in the summer,” Pace admits. “That’s more of a spring or winter color – summer months, you’re usually fishing more of a shad color. But I caught a few fish on Winnebago that had real bright-red craw pincers coming out of their mouths. I tied on a red bait, and found that they bit that color far better than shad. It’s odd for June, but it sure worked.”

A Lifetime of Tackle Tinkering

The Mississippi pro’s penchant for tackle tinkering started in high school, sheerly out of curiosity and the desire for a specific bait that he couldn’t find in tackle stores.

“Building tackle is just something that I’ve been interested in my whole life,” Pace says. “I started getting serious about it when I was about 16 years old. I always loved fishing, but I wanted to see if I could build a bait that I thought would be better than what I could buy in a store. You have to remember, fishing tackle has come a tremendous way in the past decade. Ten years ago, there wasn’t the endless array of products like we have now. If you wanted something really specific, you had to build it yourself.”

To learn more about Black Label Tackle, visit their website.