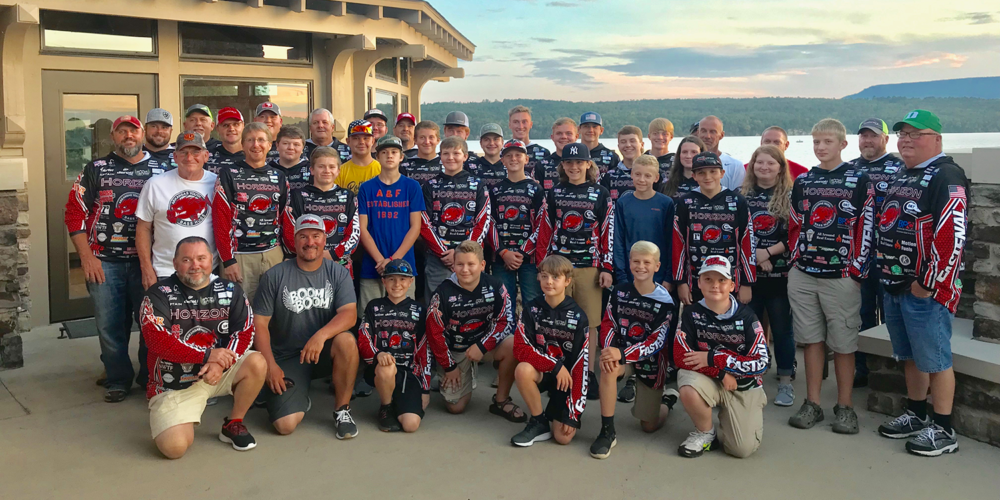 MLF pro Fred Roumbanis is back home in Arkansas for the offseason and spending some much-needed time with his family. Something that the Mercury pro likes to do when he’s not fishing on the Bass Pro Tour is helping out with the Arkansas Youth Hogs Fishing Team. The team is made up of roughly 70 kids ranging in age from 11 to 18 years old, including Roumbanis’ oldest son, Jackson.

Roumbanis is a captain for the league but is also a proud sponsor along with brothers Aaron and Jeff Mize, president Todd Higby and treasurer Tim Sanderson. In July, the team held their annual championship, but with a new twist: Instead of the traditional five-fish-limit format, the club implemented MLF’s catch-weigh-release format to determine its winner thanks to scales provided by the Mizes and Horizon Trike and Marine.

“The kids love the MLF format,” Roumbanis said. “They are just eaten up with it and it’s so good to get the kids in the outdoors. They get the opportunity to win some prizes from the sponsors. It’s the coolest thing I’ve ever seen and it’s teaching the kids to respect all bass.”

The planning is well underway for the 2019-20 season, which begins this month. Roumbanis says they plan on having one event per month until July and they will be adding plenty of more opportunities for the kids to experience the MLF style.

“The results from the championship were so great that we’re moving to splitting the format equally between a five-fish limit and the MLF format for the entire season,” Roumbanis explained. “The goal is to move to the MLF format entirely hopefully in the near future.”

Fred’s son, Jackson, is one of the members of the team and has really enjoyed fishing competitively for the first time this year. Jackson (12) and his teammate Jaden Spencer (16) finished fifth in the club’s Angler of the Year race after a great season. While Jackson’s first year was impressive, Fred says don’t let his age fool you, the young Roumbanis knows how to fish the MLF format thanks to plenty of practice time with his old man.

“When me and Jackson go out we always do a one-on-one competition,” Roumbanis said. “We weigh every fish and it has to be at least a pound, just like we do on the Bass Pro Tour. I’m training my 12-year-old to compete against me as a pro and if I showed you one of our scorecards you would laugh at me. He beats up on me pretty good sometimes.”