These Apples Didn’t Fall Far from the Bass-Fishing Tree 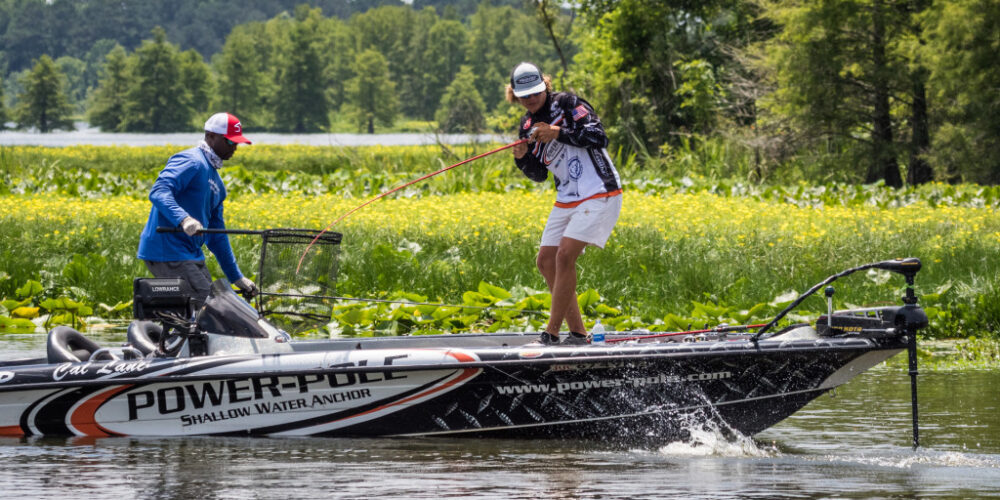 All eight divisions of the 2020 FLW Toyota Series are well underway. Some MLF pros have gotten in on the five-fish limit action this year, and so have some of their children.

Three MLF offspring—Cal Lane, Laker Howell and Mason Chapman—made their Toyota Series debuts this season, and all three have had impressive showings.

Fresh out of high school, Cal Lane—son of Chris Lane—was an angler to watch this season in the Southeastern Division. The young Lane notched a Top-10 finish on Neely Henry, which earned him enough points to qualify for the Toyota Series Championship on Lake Cumberland in December.

In his first season fishing as a pro, Cal finished sixth in the Southeastern Division and compiled more than $3,000 in winnings. While it was a solid rookie campaign, Lane didn’t come into 2020 with any expectations.

“This was really an eye-opening season for me,” Cal said. “Getting to fish against guys like Jordan Lee and other big-name pros was really awesome. I didn’t set any goals this year, I just went fishing and let the chips fall where they may. Now, I’m going to the Toyota Series Championship and I have a chance to fish the Tackle Warehouse Pro Circuit in 2021 if someone declines an invite. It feels really good.”

As for Cal’s dad and biggest fan, Chris is just happy to see his son living out a dream that he’s worked hard to accomplish.

“Watching him on the water just makes me really proud as his dad,” Chris Lane said. “I was more nervous watching him out there than I am myself fishing. I’m just really proud of him and for him to do this in his first year out of high school is awesome to see.”

Laker Howell Locks Up a Spot at Toyota Series Championship

Laker Howell, the oldest son of Randy Howell, also fished in the Southeastern Division with Cal Lane, and finished his first season as a pro in 20th place. That performance will get Howell to Lake Cumberland for the Toyota Series Championship in December as well. Add on more than $2,000 in winnings this season and that’s a solid rookie year.

Howell has been fishing Phoenix Bass Fishing League tournaments since he was 16 years old, so the second-year college student has plenty of experience fishing competitively. However, Howell admits that going up against real pros at every tournament was a whole different ball game.

“I didn’t think fishing as a pro in the Toyota Series would be that much different than fishing BFL’s,” Laker admitted. “Once I put my boat in the water for that first tournament on Lake Eufaula, I really felt the pressure. It’s hard to express the pressure you feel unless you’ve fished a professional tournament like that before. You have to go out and execute because the guys you’re going against aren’t going to mess up. I learned a lot this year and I’m excited for the Championship on Lake Cumberland.”

A lot of pressure can come from being the son of a professional, especially the son of an angler like Randy Howell. Still, Randy believes that Laker has handled his first year as a professional the right way and stayed true to himself.

“There’s a lot of high expectations for him and I never want to be the dad that pushes him too hard,” Randy expressed. “In the back of my mind, this is what I’ve always wanted for him, but of course I always wanted him to make his own decisions and do his own thing. To see him make it to the pro level on his own merit and find some success really makes me so happy for him, because he’s worked really hard.”

While Cal and Laker prepare for the Championship as pros, Mason Chapman—son of Brent Chapman—is looking to make his way to Lake Cumberland on the co-angler side of the Toyota Series.

Earlier in September, Chapman earned a 20th-place finish on Lake Dardanelle in the first event of the Plains Division season. After spending some time fishing FLW tournaments on the high school circuit and even the High School Championship, Chapman thinks this co-angler experience is even more rewarding.

“I think a lot of high school anglers can benefit from being a co-angler in pro-level tournaments,” Mason advised. “You learn a lot from the pros that you’re in the boat with. I didn’t catch any fish my first day, but I was able to make a great comeback on the second day and catch a limit for 9 pounds, 2 ounces. I’m really looking forward to these next two events and improving.”

Brent Chapman was very impressed by Mason’s ability to come back strong after a disappointing Day 1 on Dardanelle.

“It’s never fun to go out there and blank, but to his credit he didn’t hang his head at all,” Brent said. “He knew he only needed a couple of bites to get in the money, then he goes out and catches a limit. I think he’s going to learn a lot from this co-angler experience and he’s going to become a better fisherman for it.”

Mason will compete again on Lake of the Ozarks on October 8 and on Table Rock Lake on November 5. He will try to finish in the Top 25 in points at the end of the three events to earn a spot in the Toyota Series Championship as a co-angler.