5 Key Things on Day 3 on the St. Lawrence River 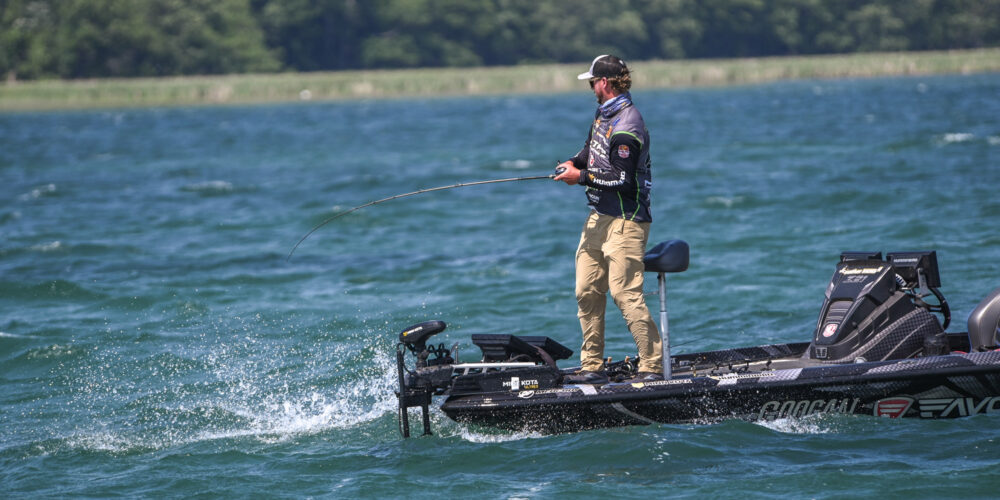 MASSENA, N.Y. – The weather was the big story as Group A returned to the St. Lawrence River Sunday on Day 3 of Bass Pro Tour Stage Five.

Wind gusts over 30 miles per hour were a significant factor as the field battled to make the Knockout Round: the day started off windy and never stopped, increasing in speeds throughout the day.

And although the wind drastically changed the smallmouth bite, Jacob Wheeler breezed to the automatic qualification after winning the group with 222 pounds, 1 ounce — a new Bass Pro Tour record. After an eye-popping first day with 165-1, Wheeler added 57-0 on Sunday to automatically advance to his 11th Championship Round in less than three full tour seasons. He now aims to win his second tournament of the season and fourth overall on the Bass Pro Tour.

But while Wheeler and the weather stole the show, there were some interesting tidbits from the day, including the day’s five key things.

One VanDam Makes It, One Falls Short

Coming into this event, Kevin VanDam was considered an easy pick as a favorite to win this week. He’s won three major events on these waters (and five times in New York), dating back to the 1995 Bassmaster New York Eastern Invitational out of Clayton. Saying he knows these waters is an understatement.

Plus, he was fresh off of a win on Lake Chickamauga and riding plenty of momentum coming into the week. He hung in right around the Toro Cut Line for much of the day, but some last-minute heroics from Marty Robinson and Alton Jones pushed VanDam to 21st place in his group.

Jonathon VanDam, also a noted smallmouth specialist, started Sunday in 10th place and moved up to fifth. His 77-15 was the day’s best, and JVD appears to have a good shot at the win as his bite appears to be holding up, with two consistent days on the water.

The aforementioned wind changed how anglers were able to fish and how they navigated their boats. It also made it much harder for anglers to use floggers, which have been so prevalent this week.

Looking ahead to Monday’s Group B final qualifying day, the wind is forecasted to be a little less, with speeds of 10 to 20 miles per hour. Rain and possible thunderstorms will replace the mostly sunny skies from Sunday.

As the event progresses into the Knockout and Championship Round, the weather is supposed to stabilize, paving the way for a return to the bigger catch totals the field put up in the first two days.

Trolling motors are built with a marvelous feature that allows anglers to lock in one place and fish comfortably without fighting the waves. The field used this feature plenty on Sunday, taking advantage of the stability to cast to areas without drifting with the wind.

The one drawback to this technology is that the trolling motor batteries are forced to run constantly to stay in position. That’s not usually a big deal with quality batteries, but the river’s current and strong winds caused some problems for anglers and led to some dead batteries.

Arizona’s Roy Hawk fell victim to this scenario and spent roughly the last hour drifting with the wind, trying to catch fish. He was hovering around the Toro Cut Line, and it couldn’t have happened at a worse time for him. Hawk still caught fish while down a trolling motor, but ultimately fell short and was eliminated after finishing the round in 23rd place with 100-8 over two days.

Limited Movement in the Standings

Still Hunting for a 7-Pounder

So far during this event, there have been eight smallmouth bass over 6 pounds weighed. The biggest bass to date was Justin Lucas with his 6-13 on the first day.

While each of those catches was impressive and helped the anglers in the Heavy Hitters standings, the field is still hunting for the elusive 7-pound smallmouth. With three more days of fishing, it’s still possible.

The New York state record smallmouth is co-owned by two anglers, an 8-4 from Lake Erie and one from here on the St. Lawrence River. Plenty of smallmouth bass bigger than 7 pounds live in the St. Lawrence, and both anglers and fans are holding out hope that one will be placed on SCORETRACKER® before Wednesday’s Championship Round comes to a close.