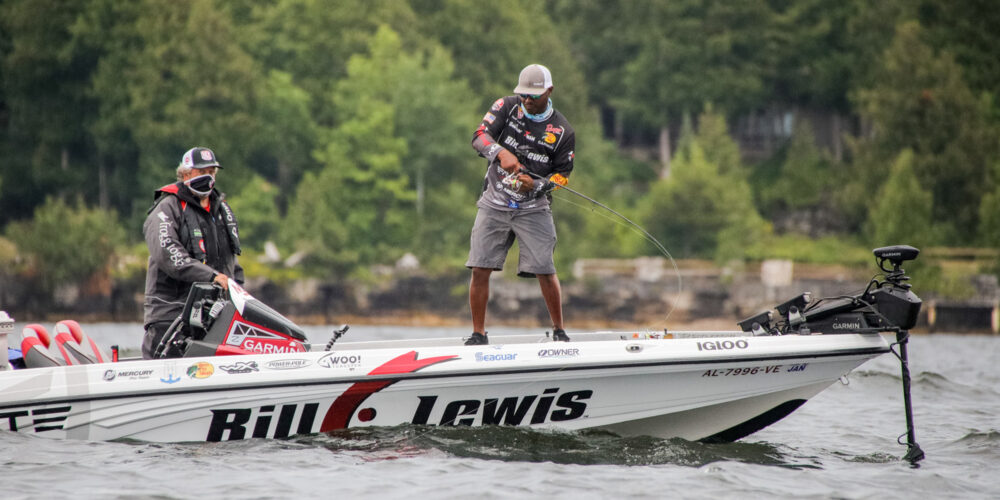 STURGEON BAY, Wis. – The Knockout Round of the Covercraft Stage Five Presented by Abu Garcia had it all. Another angler cracked 100 pounds of smallmouth bass, a Bass Pro Tour Points Champion was crowned and two catches in the final minute pushed two anglers inside the Top 8.

Throw in a nearly three-hour weather delay and it was an eventful day, to say the least.

In the end, eight anglers survived the day and will advance to tomorrow’s Championship Round to join the awaiting group winners Justin Lucas and Cliff Pace.

For the fifth day in a row, at least one angler reached the century mark on SCORETRACKER®. That will surely be the target for the eight anglers battling in the final round, and it may take a much higher weight total to win the event.

Mark Daniels Jr. was in control for much of the day and ended up with 32 bass for 103 pounds, 5 ounces. When his advancement appeared to be safe, he spent some time looking for new areas.

“I laid off of them a little at the end, but it was a pretty stellar day,” Daniels said. “My goal was to make it to the Championship Round and it happened. I got an invite to the big dance; I just hope the smallmouth decide to show up tomorrow.”

Tennessee’s Andy Morgan was Daniels’ closest pursuer, finishing the day with 28 bass for 96-3.

Jordan Lee already has the nickname of “The Champ” (among others), and added another championship title to an already-lengthy resume. You can now call him the 2020 Bass Pro Tour Points Champion.

Going into the event, Lee held a nine-point lead over Jacob Wheeler. With that in mind, Lee’s goal was simple: make the Championship Round. He did his part, finishing the day in third with 34 bass for 94 pounds. Wheeler finished the day in 15th, guaranteeing Lee yet another tour-level trophy to bring home to Alabama.

“It feels unbelievable to be able to win it against these guys,” Lee said. “To win the points (championship) is a dream come true. Add in that I got to catch 94 pounds of smallmouth today; it is an incredible moment.”

While Lee is satisfied with the title of Points Champion, he’s looking forward to another a shot at a third Bass Pro Tour victory.

“I’m looking forward to getting back out there and to have a chance for the win tomorrow,” Lee said.

Both Mike Iaconelli and Ish Monroe had a flair for the dramatic today, as both needed catches in the closing moments to advance. Their catches were so late that they were weighed before time expired and entered into SCORETRACKER® after time expired.

Iaconelli had a vintage “Ike” moment on MLF NOW!, complete with plenty of yelling, breakdancing on his front deck, and screams of “Never give uuuuuupppp!”

Monroe and Iaconelli bumped Ott DeFoe and Bobby Lane. DeFoe missed the cut by a single ounce and Lane finished just 7 ounces out of the final spot.

The Top 8 anglers will join Lucas and Pace tomorrow in the Championship Round. The forecast calls for scattered showers, rain, and a predicted high of 74 degrees with light winds.

Watch all three periods of Wednesday’s Championship Round on the MLF NOW! live stream, beginning at 7:45 a.m CST. Watch for free on MajorLeagueFishing.com, the MLF app or MyOutdoorTV. The General Tire Takeout show starts at approximately 4:05 p.m. CST after the competition.