Adjusting to Water Levels, Temperatures Will Be Mercury Keys to Victory at Stage Two 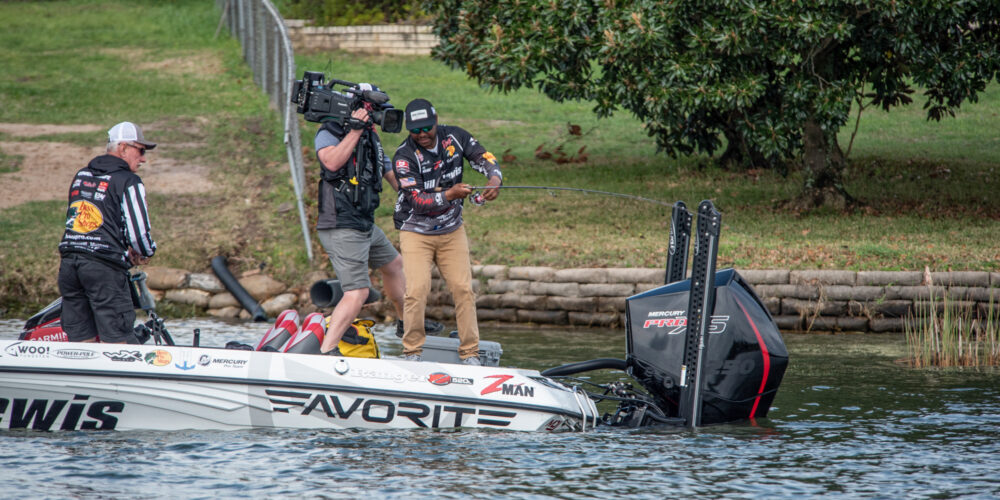 QUITMAN, Texas – After a great start to the 2022 Bass Pro Tour season in Louisiana, the field has set its sites on the famed Lake Fork in East Texas. The Toro Stage Two Presented by Grundén’s kicks off with an eerily similar start to Stage One: cold and windy conditions on waters that produce big bass.

If Stage Two is anything like the last event, some big bass will make their appearance on SCORETRACKER® during the six-day competition.

Lake Fork has been a common site for various tournaments and fun trips for the Bass Pro Tour field, but most have likely never seen it at its its current water level. The lake is generally kept at the same water level, but ongoing repair work on the eroded concrete at the dam has pulled the water 5.43 feet lower than it was at this exact time last year, and dropped Lake Fork from 96.6% of capacity to just 75.1%.

That means there’s less water and the same number of bass in the lake. According to local guide Greg West and Steve Bardin of MLF’s Fisheries Management Division, low water is generally favorable to anglers.

“(Low water) pulls the fish to where they are supposed to be and you can now see all of the trees along the channels and target them much easier,” West said. “But you can’t go running around like normal, or you’ll knock off your lower unit. Guys are going to have to idle much more to get around, or you’ll see a bunch of bent props and chunks out of skegs.”

Bardin also sees it as a positive for the fishing and the overall health of the lake as it has experienced much less fishing pressure than a typical year.

“The low water has forced some of the bigger tournaments to move locations and the fact that O.H. Ivie (Lake) has been so hot has also shifted some of the attention from destination anglers,” Bardin said. “Those two things have reduced the fishing pressure, but it’s still Lake Fork, which has produced the most Toyota ShareLunkers and the Texas state record largemouth. It’s now a smaller body of water with the same big bass.”

Mercury pro Mark Daniels, Jr. had an excellent finish at Lake Fork in 2020 for the Bass Pro Tour stop, his first ever trip to the lake. He won his group and advanced straight to the Championship Round held on Lake Athens, where he finished third. Daniels believes it will be much different with the lower water, but the shallow bite will still play.

“The low water makes it interesting since so much habitat is now unavailable,” he said. “There will still be a shallow element since there are always some bass that stay shallow. Instead of grass, it might be flipping and throwing squarebills around stumps.”

Fork by the Numbers

The Bass Pro Tour has visited Fork just once, but the lake stands out for what it produced. Bardin and the Fisheries Management Division keep detailed statistics from each event through the MLF DataTracker, which they analyze and share with state agencies after the event. Aside from the Stage One Championship Round at Bussey Brake, Fork has accounted for the best average fish size for any event in the regular season history of the Bass Pro Tour.

“It produced eight of the Top 20 bass in Bass Pro Tour history with two over 10 pounds, six 9-pounders and 44 over 7 pounds,” Bardin said. “That was from five days of fishing in 2020 and the average weight per fish was 3.53 pounds, the best among regular season events and not counting Heavy Hitters. To put that into perspective, last week on Caney Creek was very good for big bass, but the average was 3.20-pounds.”

The data also shows that anglers caught most of the fish in shallow water around vegetation in 2020, and that won’t be the case this year due to the low water and earlier competition dates.

“Ninety-one percent of fish were caught in less than 5 feet of water in 2020 and 69% were caught around vegetation,” Bardin said. “It’ll be different this time of year, as many traditional prespawn locations are now shallow and vulnerable to the cold weather. Even with this cold front, we had a milder winter in Texas and the fish are making their way to spawn. There may be some male bass pushing shallow to start looking around if we get some warmer afternoon weather.”

How’s the Fishing Going to Be?

As practice started for the event, the anglers were greeted with temperatures in the high 20s/low 30s and big winds, two difficult situations for effectively finding a winning area. Daniels believes the weather will be a factor but that the big fish should be biting, just like the last time he was here.

“That (2020) event was later in the year in March, but all of my fish came by flipping cattails and fishing a Rat-L-Trap and weightless worm up shallow around grass,” he said. “This time, we’re going to see jerkbaits and big spinnerbaits being players. You should also be able to drag a Carolina rig on points and catch a few.”

But the quality of what the competitors find should be good based on what West has seen recently.

“Practice isn’t going to be great since tough post-frontal conditions follow a cold front,” West said. “The water temperatures on the main lake have been in the mid to high 50s and will be knocked down a bunch with this cold weather. It’ll get better as the week goes on like it did for the first event last week. There’s also a full moon, which will get fish moving no matter how cold it is because they want to get ready to spawn.”

West believes a wide range of winter and prespawn tactics will play this week and says the deep bite has been much better than normal years.

“A jerkbait and flat-sided crankbait are two lures that will come into play for this tournament,” he said. “Guys will catch them with ChatterBaits and flipping a jig. There’s also a good deep bite down as deep as 30 feet of water, so football jigs and spoons may be a good way to catch some.”

Daniels believes the event will produce plenty of Lake Fork lunkers, no matter the weather.

“It‘ll be a slower bite and not a ton of fish, but the quality is going to be there,” Daniels said. “It’s Lake Fork and these suckers are big here.”