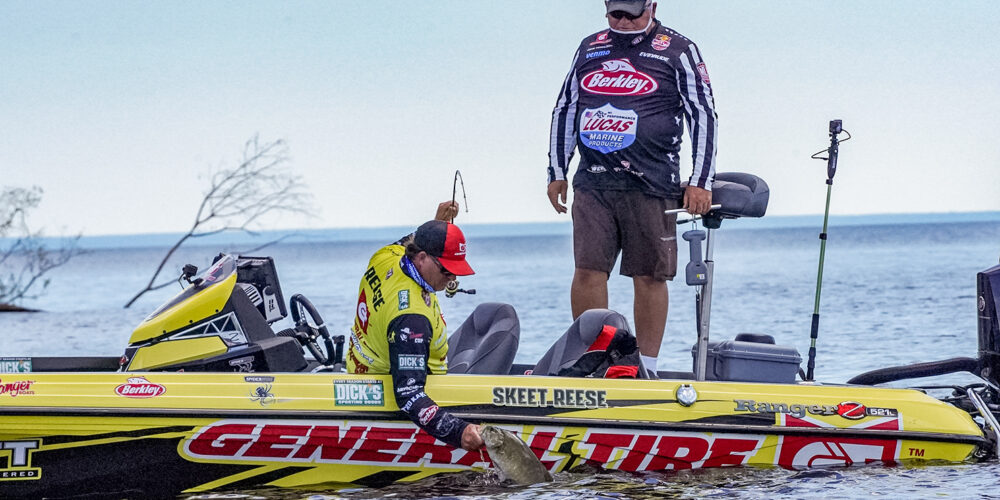 Skeet Reese looks ahead as his chances of qualifying for the 2021 REDCREST and Heavy Hitters events are within reach. Photo by Chris Shangle
July 11, 2020 • Mason Prince • Bass Pro Tour

STURGEON BAY, Wis. – It may have taken him a little longer than he would have liked, but Skeet Reese figured out how to catch them on Sturgeon Bay during his first Qualifying Round of the Covercraft Stage Five Presented by Abu Garcia.

“I thought everything set up right for me to get some bites in that first period but it just didn’t work out,” Reese recapped. “With 20 minutes left I decided to pull the plug on what I was doing and moved to a different spot.”

That move to a new area proved to pay off for Reese in a big way as he registered 22 bass for 67 pounds, 3 ounces over the final two periods to end his day in fifth place on SCORETRACKER®.

“That spot I moved to in the second period was a spot where I didn’t get bit in practice,” Reese said. “It had all the makings of a good spot, but I just couldn’t get them to bite in practice. I fished it a little differently today and it turned into nearly 70 pounds of fish caught.”

The difference for the California pro was a two-bait approach with a drop-shot and a jerkbait that brought in numerous 3-pounders and even a 4-pounder. Still, even after finishing his day inside the Top 20 and with a comfortable lead over the Elimination Line, Reese has his eyes set on the future and what’s at stake in this final event of the season.

“I don’t know how to catch a 5-pounder here, so that’s not good because right now I’m below the 2021 Heavy Hitters Qualification Line,” Reese said. “I know those big smallmouth are out here because I’ve heard other guys catching them. I was even out here last summer with my family and we caught some 6-pounders. Well, my wife may have caught more big ones than I did, but I know they’re here. I just have to catch them if I want a shot at Heavy Hitters because right now I’m 4 ounces out of the cut.”

It’s not just Heavy Hitters that Reese is concerned about; he’s currently trying to qualify for 2021 REDCREST as well. After missing the Knockout Round in each of the first three events of the 2020 season, Reese found himself near the bottom of the field in points. He needed a good event in the worst kind of way, and he got it with Heavy Hitters.

Reese won his Qualification Round and earned a trip straight to the Championship Round in Kissimmee, Florida. The Berkley pro was unable to come away with a win, but his fifth-place finish gave him some crucial points heading into Sturgeon Bay and a chance to make some noise in the standings.

“I didn’t think I had any chance at all to make REDCREST with the way I started the season,” Reese admitted. “To move up all the way to 44th place in the standings after Heavy Hitters was a complete shock. All of the sudden I felt like I had a shot to qualify and do something special with this season.”

Reese will head into his second day of fishing more than 22 pounds above the Elimination Line and with a chance to make just his second Knockout Round of the season. If he’s able to do so, it could be enough to get him to his first-ever REDCREST.