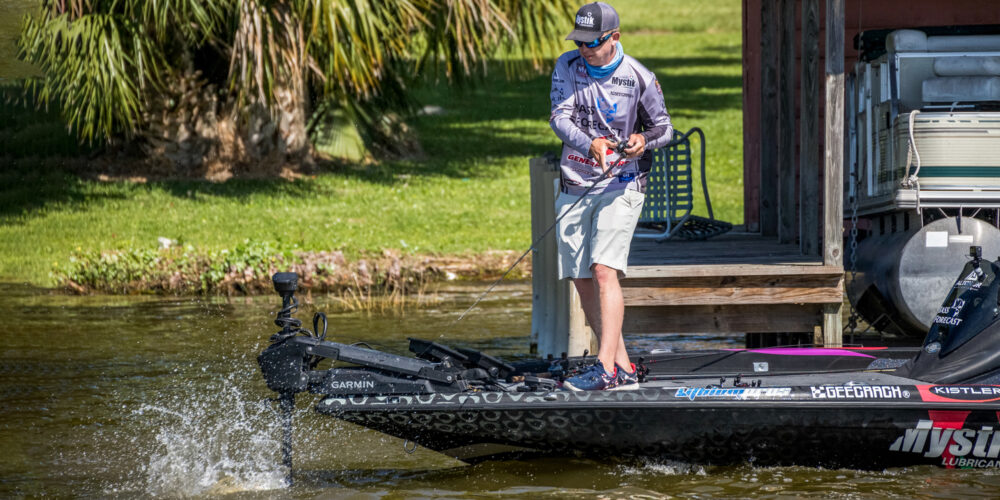 It’s no secret that fall fishing can be challenging, but dropping water compounds the problem in many lakes as available cover shrinks with each inch of diminishing water level. Texas pro Alton Jones Jr. has learned to keep his bait selection simple this time of year, and frequently target areas that many anglers overlook.

The annual drawdown of reservoirs is typical in many parts of the country as water managers bring lakes down to winter pools in anticipation of upcoming winter and spring rains. Some lakes are already low due to lack of rain; whatever the case, low water reduces the amount of available cover in fisheries around the country.

“If the water is dropping, it sucks all of the fish from the creeks and flats to isolated cover,” Jones says. “So, I always look for the most isolated pieces (of cover) and it doesn’t matter what it is: wood, docks, whatever. The more isolated, the higher percentage it is.”

Many of these isolated pieces of cover are hard to get to in low water, and some anglers don’t think they’re worth the trouble.

“Many anglers overlook some of this cover because of how shallow and hard to get to it can be,” he says. “You can’t just run up to them, shut down, and start fishing. Some of these pieces of wood or shallow docks may take a 10-minute idle to get to, and I’ve seen spots where five or six fish will be on that little piece of cover.”

According to Jones, whether the water is high or low, fall is a time for baitfish imitators.

“Everyone knows that in the fall, the bass are going to be keying on baitfish,” he says. “The other thing to keep in mind is that there is nothing that is ‘too shallow’ for bass this time of year, even places that are hard to navigate because they are so shallow. That’s the first thing I would look for on a new lake during the fall.”

Jones’ top bait for fall fishing is a squarebill, followed by a spinnerbait and something to pitch at isolated cover.

“The squarebill would be my top choice and your casting angle is very important,” he advises. “I’m not just going to make one cast at the tip of a laydown; I’ll parallel each side and really dissect it. It may be three, four, or five casts to the same piece of cover and you’ll be surprised how many you catch at the same place on the fifth cast when you make the perfect angle to trigger a strike.”

Jones mixes in plastic and balsa baits and varies that based on the type of cover he’s fishing and water clarity.

“If the water is dirty, I like a balsa bait because it displaces more bait and has a wider wobble,” he says. “Balsa is also very buoyant and you can burn and stop and get those good directional changes. Plus, it doesn’t hang up as much around wood because it floats right back up much quicker. For rocks and clear water, I prefer a plastic squarebill.”

Aside from a squarebill, Jones also relies heavily on a spinnerbait and pitching a tube.

“I like a spinnerbait when I’m looking for a bigger bite and stick with the basic colors of whites, white and chartreuse, and maybe something with a few strands of blue in there,” he says. “I also really like to pitch a green pumpkin tube with a light weight to pick apart pieces of cover. It’s a good way to catch those dormant fish that don’t want to chase anything.”