Road to Bally Bet AOY: Race Heats Up as it Enters Back Stretch of 2022 Bass Pro Tour Season 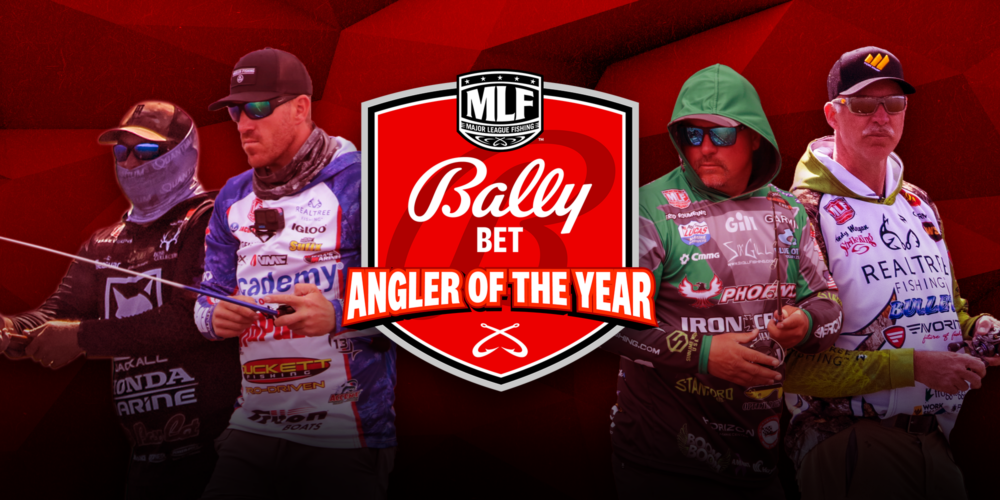 Four events down in the seven-tournament 2022 Bass Pro Tour season, the storylines and intrigue are building in the Bally Bet Angler of the Year race. Several anglers have positioned themselves for a shot at the $100,000 AOY check and trophy, with defending Bass Pro Tour AOY Jacob Wheeler firmly in the driver’s seat.

Further down the standings, anglers are fighting for REDCREST berths, with the 30th and 50th place anglers separated by only 31 points. Now’s the time for anglers to buckle up and get it done, with just three events remaining in the season.

After last year’s dominant run where he won three events on his way to his first career AOY title, it’s pretty hard to believe that Jacob Wheeler hasn’t won a Bass Pro Tour trophy in 2022. He owns five red-and-silver BPT trophies, but he’s driven more than ever to add another piece of Bally Bet AOY hardware to what’s likely an insanely cool trophy room in his Tennessee home.

While Wheeler hasn’t won yet this season, he’s placed in the Top 10 in all four stages (plus the non-points REDCREST) and controls the AOY race with 300 points. Jordan Lee has also had a stellar 2022 and sits 16 points back from Wheeler with 284.

Wheeler is one of the most calculated anglers on tour, and now his focus is on getting Top 10s. He commented during Stage Three that his goal was to win his group and advance, primarily because of the points.

As Keith Poche rallied and got closer to Wheeler on the second qualifying day, Wheeler had to catch a few spawning fish he had located to win the round. He had planned to save those fish for the Championship Round, but Wheeler opted to catch them, securing crucial Top 10 points.

Angler of the Year is definitely on his mind as the season hits the home stretch.

While all of the attention has been on Wheeler and Lee, Andy Morgan sits in third place in the points race, 29 points behind Lee and 45 back of Wheeler. It’s a tall mountain to climb, but Morgan knows a thing or two about winning AOY races.

He earned his “G.O.A.T.” nickname from Cody Meyer during his FLW Tour days, where he was a fixture in that series since its inception in 1996. Morgan’s best run came between 2013 and 2016 when he won Angler of the Year three times. He knows how to win that title and the next event on Watts Bar is a home game of sorts for the Dayton, Tennessee pro.

With his win at Stage Four at Lake of the Ozarks, Alabama pro Jesse Wiggins jumped from ninth in AOY standings into the Top 10 for the first time in his career (he’s fourth with 251 ½ points). Not far behind him, Alton Jones Jr. appears to be dug in for the long haul in 2023 with 231 pounds.

And oh by the way, the angler lurking in sixth place has a fair AOY pedigree as well: eight-time AOY winner Kevin VanDam with 227 ½ points.

Much of the focus in the points race is rightfully focused on the top, but the jockeying in the middle of the pack is getting interesting as well. The Top 40 anglers will qualify for next year’s REDCREST and some fixtures have work to do, and some new faces are trying to make their first-ever championship with MLF.

The last three anglers currently in the cut are Fred Roumbanis, Marty Robinson and Skeet Reese. Roumbanis qualified for the first two REDCREST events but narrowly missed out last year, while Robinson is looking for his first qualification. After two straight years with finishes in the 70s, Robinson is looking to bring his party to REDCREST in 2023.

Reese is looking to make his second straight REDCREST after two subpar (for him) seasons on the Bass Pro Tour, where he finished 43rd and 62nd in the standings.

The first three on the outside looking in are Tommy Biffle, Andy Montgomery and David Dudley. Biffle has never made a REDCREST and it’d be a great story if he did after some struggles to start the Bass Pro Tour chapter of his storied Hall of Fame career.

Dudley has been excellent in his two-plus seasons fishing the BPT, finishing 17th and 21st, so look for him to rebound and push into qualification. The same can be said of Montgomery, who’s been extremely consistent with finishes of 19th, 23rd, and 15th the last three seasons.