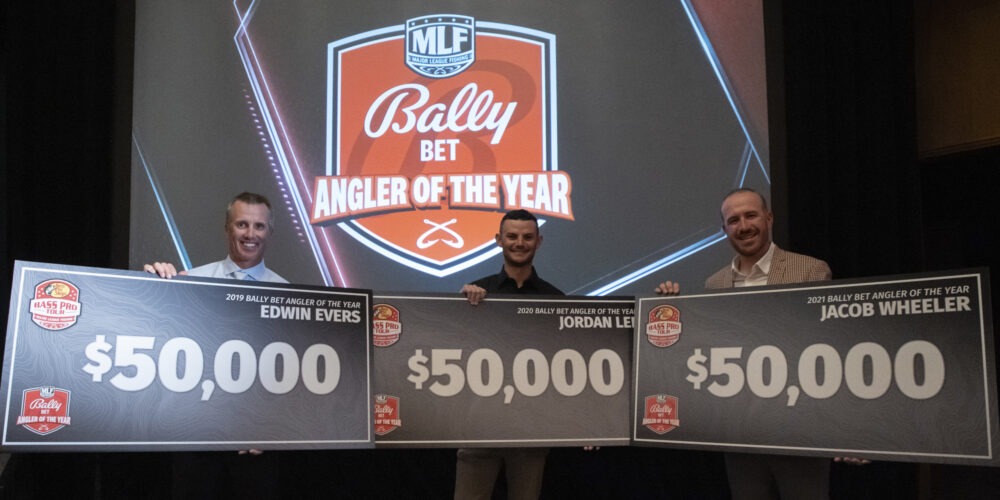 TULSA, Okla. – As the MLF Bass Pro Tour winds down toward the final quarter of the 2022 season (and the end of the race for Bally Bet Angler of the Year), the anglers leading the race can look back at a seminal moment in the development of the AOY program partnership.

One of the highlights of REDCREST 2022 Presented by Costa came shortly after 2021 Bass Pro Tour Angler of the Year Jacob Wheeler gave his champion’s acceptance speech, and after Wheeler, 2020 AOY Jordan Lee and 2019 AOY Edwin Evers were presented their commemorative Angler of the Year rings.

As the three AOYs showed off their rings, Michael Mulone – MLF’s Vice President of Strategic Business Planning – came to the podium carrying three oversized checks: one for Wheeler, one for Lee and one for Evers, all emblazoned with the number “$50,000”. Unbeknownst to the three, Bally’s Interactive – the sponsor of the 2022 Bally Bet Angler of the Year award – had allocated $150,000 of its sponsorship to retroactively reward the three pros for winning the prestigious AOY race prior to the Bally’s/MLF partnership. Wheeler, Lee and Evers all went home $50,000 richer in recognition of their AOY years.

“We’re proud of our sponsorship with Major League Fishing and are thrilled to reward these former Bass Pro Tour AOY winners with these well-deserved $50,000 prizes,” said Adi Dhandhania, Chief Operating Officer of North America for Bally’s Interactive, the online sportsbook operator’s parent company. “The Bass Pro Tour is a showcase of the best anglers on the planet, and we’re proud to associate our brand with the award that many consider to be one of the most difficult prizes in the sport to win. Congratulations to all of the former Bally Bet AOY champions, and we look forward to watching who will take home the $100,000 top prize for the AOY in 2022.”

Grand Reward for a Career Accomplishment

Ask any of the 15 anglers on the 2022 Bass Pro Tour roster who have claimed tour-level Angler of the Year titles and they’ll tell you bluntly: “The AOY is what I’m the proudest of.”

Ask Kevin VanDam, who has racked up more tour-level wins (approaching 30 of them) and has earned more money in bass tournaments than any angler in the history of the sport, and he’ll confirm that his astounding eight AOYs are the pinnacles of his career. That sentiment will be echoed by Mark Davis, David Dudley, Jordan Lee, Andy Morgan, Jacob Wheeler, Bryan Thrift and all the other MLF pros who have earned a coveted AOY title.

“Every win feels great and every trophy looks good in a trophy case, but there’s nothing in the sport of bass fishing that compares to being an Angler of the Year,” said Morgan, whose display at his home in Dayton, Tennessee, includes three FLW Tour AOY trophies. “Those three (AOYs) are the best things I’ve ever accomplished in this sport. Everybody fishing at this level can get hot for three or four days and win a tournament, but man, if you win an AOY, you’ve caught fish better and worked harder than everybody else all year long. It’s very rewarding to win (an AOY).”

And thanks to the groundbreaking  partnership announced in January between Major League Fishing and sports gaming giant Bally’s Corporation, that AOY will also be very lucrative to win in 2022.

Under the terms of the deal, Bally’s will serve as the exclusive Sports Betting, Daily Fantasy Sports (DFS), and Free-to-Play (F2P) Partner for MLF’s tournament circuits – all firsts for the professional fishing industry. Even more importantly to the 80 anglers competing on the 2022 Bass Pro Tour, the partnership includes Bally’s online sportsbook, Bally Bet, becoming the title sponsor of the coveted Angler of the Year award for the Bass Pro Tour.

That award – which is acknowledged with Bally Bet Angler of the Year patches on the right shoulder of participating Bass Pro Tour angler jerseys and on the gunwales of their boats – comes with a cash payout of $100,000, the highest AOY payout in professional bass fishing.

“The guy who wins the AOY has had a great season, and the Bally Bet AOY is an excellent way to recognize what a major accomplishment that is,” VanDam said. “You have to have a special year to win an Angler of the Year. I’m a fan of the sport first, and to watch an angler get in that zone is really fun. I’ve won several (AOYs), and I know how it feels to get in that zone, but it’s been really intriguing to me as a fan over the years to watch guys have those years. Bally’s stepping up like they have is a big deal for our sport.”

The relationship further reinforces MLF’s commitment to develop and connect with a broader fan base that includes followers of other major sports.

As part of the agreement, Bally’s technology powers two fantasy fishing games that kicked off the 2022 season. The MLF Predictor Game – an engaging game that offers fans the chance to make predictions at Bass Pro Tour events for prizes – and MLF Fantasy Fishing are operational for both the MLF Bass Pro Tour and the MLF Tackle Warehouse Pro Circuit, and are serving tens of thousands of fantasy players. The free-to-play fantasy game allows fans to select their team of anglers for each tournament, create private leagues with their family and friends and win tens of thousands of dollars in cash and prizes.

“We know how passionate the millions of recreational anglers are about the professional ranks of their sport,” said Dhandhania. “This integrated partnership is a perfect showcase for Bally’s, allowing us to leverage our sports betting, daily fantasy sports, and free-to-play games to enhance the fishing fan experience across MLF media and live events.”

You can log on to the MLF Fantasy Fishing Center at www.fantasyfishing.com.