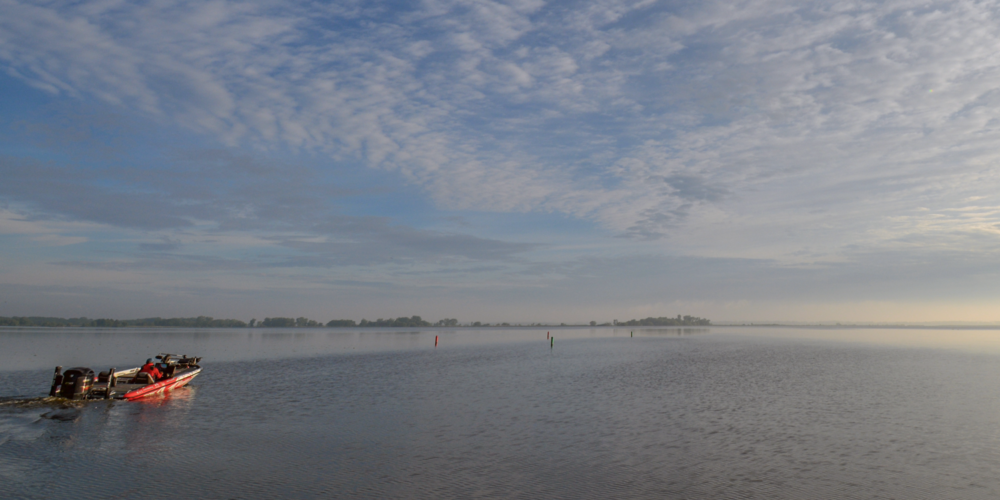 NEENAH, Wis. – Lake Winnebago is the largest inland lake in the state of Wisconsin, covering over 130,000 acres. It’s also the final stop of the 2019 regular season for the 80 anglers competing on the MLF Bass Pro Tour. Well, partially the last stop.

The field of 80 fishing the Evinrude Stage Eight Presented by Tracker Off Road (June 25-30) are scheduled to compete on Winnebago during the Shotgun and Elimination Rounds. The remaining 40 pros will then compete on the next lake in the Winnebago Chain, Butte des Morts, for the Knockout Round. The final 10 anglers fishing the Championship Round will leave the Winnebago system and fish Green Lake in neighboring Green Lake County.

If there’s a windy day – and big Winnebago is too dangerous to fish, as is sometimes the case in June – the pros will fish the backup lakes of Winneconne and Poygan, also part of the Winnebago Chain.

To get a better grasp of these largely unknown-to-the-field fisheries, we tapped into two locals with years of experience on the Winnebago system: Matt Stefan, a local guide and professional tournament angler based in nearby Junction City, and Curt Demerath, owner of Dirty Jigs Tackle, based in Greenville.

Many anglers automatically think of deep rocky reefs and large schools of smallmouth bass when they think about fishing in Wisconsin, but that’s not the case on Winnebago.

“I’d say the population of largemouth to smallmouth bass is evenly mixed as far as what you can catch,” Stefan said. “I believe many of the anglers fishing this event are going to instinctively head to the offshore reefs to try and find concentrations of summer smallies, but they’ll likely be disappointed.

“What I mean by that is we don’t see that happen very often, if ever. Yes, many of the summer tournaments are won by anglers fishing offshore for smallies, but not school fishing. They’re just finding one or two fish and running to another spot. You need to have a dozen or more areas located with specific spot-on-spot structure. Make one or two casts from a specific angle to a specific target, and if they aren’t there, move to the next one. While an MLF pro is doing that offshore, another pro is catching scoreable bass along the shoreline.”

“I think everyone might be shocked, but I wouldn’t be surprised that 70 percent of the bass scored are largemouth,” Demerath confirmed. “We’re coming up to the most stable time of the year for the fishery, and I believe that’s what will play out. Sure, in a typical five-fish limit tournament, anglers may win offshore, but they are only looking for seven or eight bites per day – you’ll get killed doing that in the MLF format.”

Stefan believes that the lake’s largemouth tend to be slightly bigger on average than the smallmouth. “A 4-pounder is a game changer,” Stefan said. “There are more largemouth that size than smallmouth, from what I’ve seen over the years.”

Deep, Shallow or Somewhere in Between?

Keep in mind, Winnebago isn’t a deep body of water. The deepest area is around 21 feet and the bottom is generally comprised of mud. And although it’s a massive piece of water, there’s a lot of water void of bass due to lack of proper bottom substrate.

“I believe two types of approaches are workable, but I believe one is a better choice than the other for this format,” stated Demerath. “There is a lot of good rock on the reefs offshore in the 6- to 8-foot depth range. That’s where the bigger smallies tend to be. I wonder how many anglers will try to make that work and adapt to the run-and-gun fishing style it usually takes there.

“I think the anglers who will do the best will run the shoreline, looking for a little bit deeper water and fishing the mixture of hard bottom and weeds or docks. If they find a school of white bass pushing bait, they could get healthy quick. I mean like catching 20 bass, both largemouth and smallmouth, on 20 casts. There are so many 1 ½- to 2-pound bass along that cover with an occasional 3- or 4-pound fish. Sometimes you’ll even find a wolf pack of bigger fish doing that.”

Stefan believes that the field doesn’t need to focus on largemouth or smallmouth bass when fishing the shallows: “Just fish in less than 6 feet of water and look for hard bottom and weeds and keep moving. You’ll run into both species of bass doing that on Winnebago.”

East is the Least

Neither Stefan nor Demerath believe that only one area of the lake will be the decisive spot to move on to the Knockout Round, but both agree, the east side of Winnebago is not the place to be.

“For me, the east side of Winnebago is the total feast or famine part of this fishery,” exclaimed Demerath. “And not a Thanksgiving feast. More like a bad cookout at a buddy’s house. Forget everything you know about bass fishing and wind. The east side bottom is muddy and when the wind blows, as it usually does against the eastern shoreline, it really gets muddy. There isn’t much good cover holding the bass on the east side. Run away from the wind and look for the clearer water.”

Stefan agrees simply: “Stay away from the east side.”

The basic arsenal on Winnebago is typical for summer bass fishing in northern waters. A mix of casting, pitching, flipping, and drop-shot techniques will all work at various times.

“A weightless Senko or other stickbait, fluke, or a Neko-rigged worm are the go-tos out here,” Stefan said. “I believe there will also be a solid buzzbait bite, and if you find thicker weeds up top, a frog could play. Add a swim jig, a squarebill, and a crankbait like a Rapala DT-6 when fishing the deeper weed edges. Heck, small swimbaits and even a lipless crankbait can catch them. I think the MLF pros have a chance to really tear them up on Winnebago.”