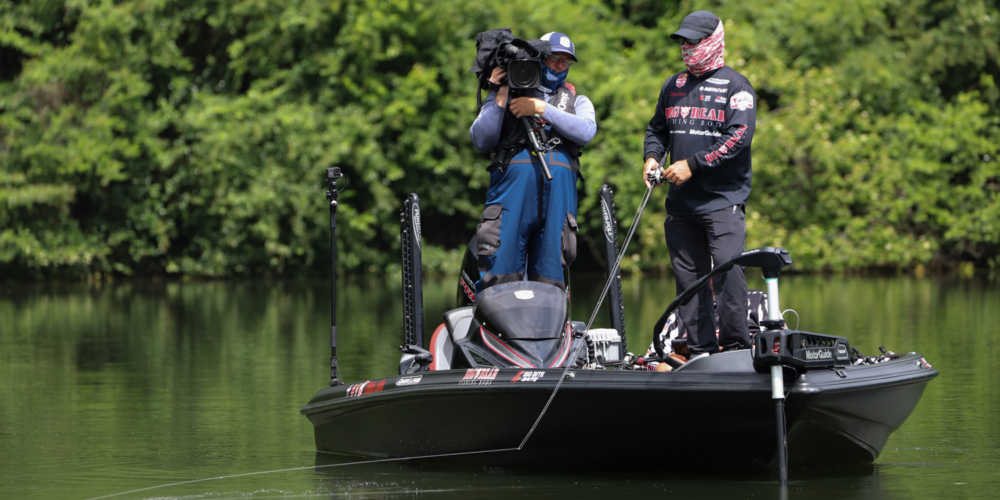 Georgia pro Clabion Johns quickly climbed the ranks of MLF, winning Rookie of the Year honors on the Tackle Warehouse Pro Circuit in 2021 while qualifying to fish the Bass Pro Tour in 2022. The Mercury pro’s success has come fishing his way; staying shallow and shunning the technology found on the boats of his 79 competitors.

You won’t find forward-facing sonar, a GPS-enabled trolling motor or spinning rods on Johns’ boat. What you will find is plenty of power-fishing lures, including several frogs.

Johns is an admitted frog fanatic and puts his own unique spin on the technique, fishing them around a wide variety of cover, not just matted vegetation. He’ll throw a frog around mats, too; but Johns has learned that he can catch fish virtually everywhere he competes (as long as the water is over 50 degrees).

Johns nearly won his group’s qualifying round at Stage Five on Watts Bar in early June, finishing second to David Walker in Group B, all thanks to a frog fished around sparse grass and above submerged vegetation near the launch in Spring City.

“The frog is an amazing bait to fish above targets, and I’ll do it in water that’s less than 8 feet,” Johns said. “I normally fish it in 3 to 6 feet of water where the grass may tap the surface in some places, but it doesn’t have to. It’s also a great tool for fishing above stumps, dark spots or anything the fish are holding around.”

The 50-degree water temperature mark in the spring is when Johns starts throwing a frog.

“Below that and it’s more of a crawfish bite near the bottom, and I won’t be frogging,” Johns said. “I’ll start fishing them in the spring, and all year after that. The slick calm days are my favorite times to throw a frog, but I’ll fish them in every condition if I can.”

“The original SPRO Poppin’ frog changed my life when it first came out and it’s still one of my favorites,” he said. “I’ll use the Poppin’ Pad Crasher to get a more aggressive action because it pops harder. It’s excellent for spawning fish and around the shad spawn because you can pop it faster and more methodically.

“I like to fish popping frogs on grass mats, ‘slicing the pie’ in the grass, and making a mark from my braid with hard pops. I’ll make my casts 10 feet apart because I feel any fish within 5 feet from the frog will come and get it.”

For a standard frog, Johns likes the Booyah Pad Crasher for its softness and hooking ability, and its unique action.

“It doesn’t sit as high as other frogs and is almost flat, so you can do what I call ‘humping a frog’ and get it to move with the nose coming up and down,” he said. “I’ll fish it as fast as you would a buzzbait, just working it in a straight line quickly while reeling. It’s perfect in skinny water like silted oxbows less than a foot deep. It’s also great for skittish fish in high-pressured situations where everyone is fishing a frog. I’ll let everyone else walk their frogs – I never do that, and fish them in a rhythmic motion straight back to me.”

Many frog anglers theorize that you only need two colors – black and white – to cover all situations.

“Can you guess which two colors I never throw?” Johns said with a laugh. “I try to make my frog look different from what the fish see daily. The leopard, speck and killer gill are some of my favorites in the SPRO colors. Something that imitates bluegill or real frogs always seem better for me.”

For fishing frogs as much as he does, Johns has experimented with all of his gear, paying extreme attention to detail in each piece of equipment. Starting with the line, he goes with a 65-pound Spiderwire Ultracast braid.

“At first, that braid is rough and won’t cast well, you really have to break it in, and then it’s great,” he said. “I use 65-pound for the strength, but also because it won’t cut into itself on the spool as much as 50-pound will. It lays uniform on the spool, giving you much better performance than a lighter braid.”

His reel of choice is a 6.6:1 Revo STX that he pairs with a 7-foot, 6-inch extra-heavy, moderate action signature series Big Bear Rod.

“I like a slower reel speed than many because you can tend to overwork a bait with a faster reel and have a harder time getting the right cadence,” Johns said. “The rod is not a broomstick and loads throughout the rod, and it gives a stopping point for the load when you set the hook hard. It won’t rip the hooks out like you will with a stiffer rod.”