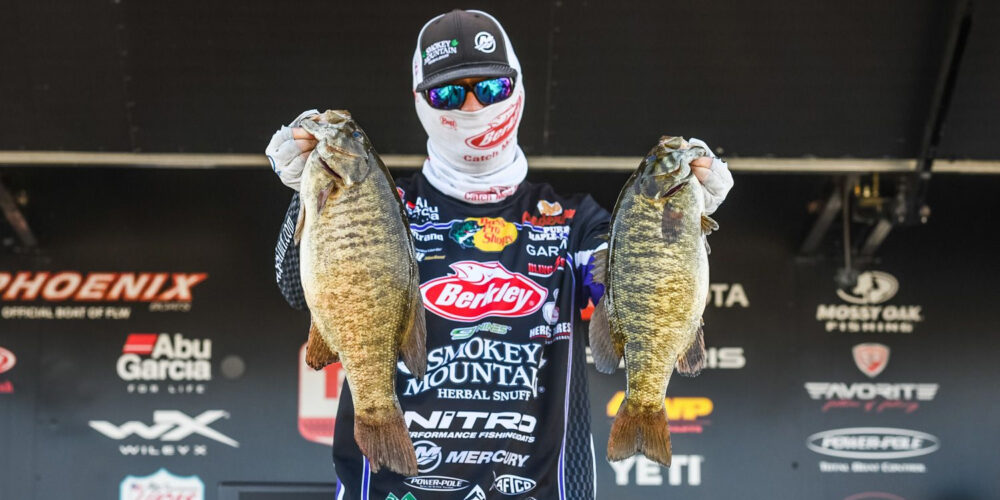 Josh Bertrand's 22-14 on Day 3 put him back into the lead heading into the final day of the FLW Super Tournament on Lake Erie. Charles Waldorf photo
August 13, 2020 • Joel Shangle • Bass Pro Tour

SANDUSKY, Ohio – After three days of carefully, efficiently capitalizing on a limited number of bites on Lake Erie – but the right kind of bites – Josh Bertrand now finds himself in the position to hold serve for a $125,000 payday and the first FLW champion’s trophy of his career.

The Arizona pro brought 22 pounds, 14 ounces of Lake Erie smallmouth to the scales Thursday in the penultimate day of the 2020 regular season, pushing his three-day total to 62-12 and sending Bertrand into Championship Friday with a slight cushion over fellow MLF pros Jacob Wheeler (22-5 Thursday for 60-9 total) and Justin Lucas (18-3/59-8).

Bertrand continued to patiently work his way around the rock piles, depressions and irregularities of Gull Island Shoal, located 2 miles inside the Canadian border on Erie, due north of Sandusky. As was the case the first two days of competition, the Berkley pro’s bites were few – he caught seven fish on the day – but a pair of 4-pounders early in the day gave him the confidence to stay with his plan.

“Those couple of early fish helped easy my mind, and I just plugged away with a fish very hour and 15 minutes or so,” Bertrand said. “It was slow but steady. That shoal is pretty big – all I’m doing is bobbing around there, fishing any irregularities I see on my LiveScope. There are fewer boats there every day, so with any luck tomorrow, I’ll be able to move around freely.”

“I know that Wheeler is just 2 pounds back, and guys like (Justin) Lucas and Alton Jr. could catch 25 pounds (on Friday),” Bertrand said. “I definitely need to catch at least 20 pounds tomorrow.”

Friday’s forecast calls for winds building to 17 to 25 mph in the afternoon, which could necessitate tournament officials to limit the final day to the waters of Sandusky Bay. If that’s the case, anglers who have made their tournament fishing Lake St. Clair will have to quickly develop new gameplans for the final day.

Bertrand’s shoal — while unprotected from the wind and difficult to fish when gusts are blowing across Lake Erie — doesn’t seem to be affected negatively by wind.

The final day of the FLW Pro Circuit Super Tournament out of Sandusky, Ohio can be viewed live on the FLW Live stream on the homepage of the FLW website, starting at 8 a.m. EDT.

Fans can catch a full day of streaming, on-the-water tournament action aboard Bertrand, Wheeler, Lucas and others’ boats, with hosts Travis Moran, Todd Hollowell and Marty Stone calling the action.