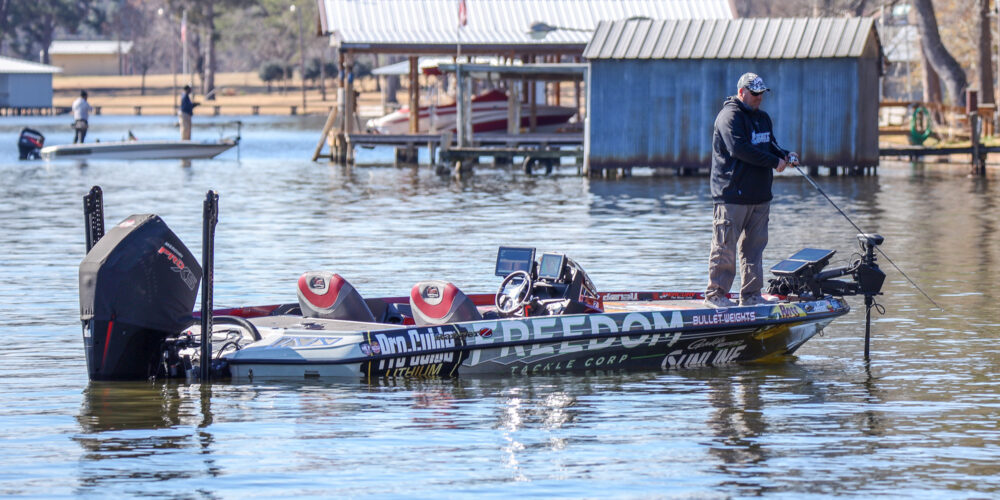 GROVE, Okla. – The field of 41 anglers competing in REDCREST 2022 Presented by Costa includes three Mercury Pro Team anglers from Oklahoma – Edwin Evers, Zack Birge and James Elam – with plenty of Grand Lake knowledge. But some other Grand Lake hotshots not fishing the event offered some insight into the fishery and who they believe will do well in the event.

A recently minted Bass Fishing Hall of Famer, longtime Mercury pro Tommy Biffle lives two lakes down the Grand River system on Fort Gibson Lake but says the lakes experience similar cycles based on the weather patterns. One of his last big tournaments on Grand Lake was a 2018 Bassmaster Elite Series stop, where he finished second to Kevin VanDam.

Biffle has been fishing his home waters and says fish in the Grand system are biting very good right now.

“They’re biting like crazy on Fort Gibson and the water was 55 degrees yesterday,” he said the day before REDCREST practice started. “I very seldom throw a crankbait, and I’m catching a lot of fish on one right now. I know the weather for the first day is supposed to be cold, but that won’t affect the fish much, even if the water temperatures drop. Grand Lake is an excellent cold-water lake.”

Biffle believes VanDam, Jacob Wheeler and Jeff Sprague are three anglers to pay attention to and believes any of the three could be a REDCREST winner.

“KVD has won here before and it was about this time of year, plus he knows the kind of banks to look for,” he said. “Wheeler is an easy one because he’s the hottest angler out there right now. I also see Sprague doing well, because he’s always fishing fast, and I think that will be the way to win this week.”

After picking his three, Biffle had to keep going.

“It’s hard to pick just three out of this bunch,” he admitted. “I also think Edwin Edwin and James Elam could do well because they each have a lot of time on Grand Lake.”

Although Mike McClelland is a Missouri pro who calls Table Rock Lake home, he’s had plenty of success on Grand. That included a 2006 Elite Series event win and an 11th-place finish a year later. Although he doesn’t fish the lake as much as he’d like to, he knows Grand Lake well and has insight into who should do well.

“The lake’s changed a bunch over the past decade with much more pressure, but the cold weather recently has kept those fish out and they want to swim to the banks,” he shared.

McClelland predicts that shallow-water experts will do well in this one.

“I have to go with Edwin Evers on this one because of his success here and his approach to shallow fishing,” he said. “I also think Kevin will be a strong contender; he knows the lake well and has won here. My final pick is Stephen Browning because he’s crafty and always finds something a little different, and that could be good with all the pressure the lake has been getting from recent tournaments.”

Jeremy Lawyer is a rookie on the Bass Pro Tour and lives in Sarcoxie, Missouri, just over an hour from Grove. The Mercury pro took home the win at the FLW Tour event on the lake in 2019. He’s also been fishing the lake a lot recently and thinks it will be good.

“I’ve been out there several days recently myself and the lake is in really good shape,” he confirmed. “It’s really clean water and that opens up the whole lake from the Elk River to the dam, and there have been a lot of fish up shallow. There have been three major tournaments recently that caught many of those fish, but the warmer weather will keep the fish coming.”

Lawyer believes REDCREST is set up to be a “shallow water, power fishing beatdown” and thinks forward-facing sonar will not be a factor.

“That’s what seems like every tournament is won on lately, but this one should be ‘old-school’ shallow fishing and those are the guys who should do well,” he said. “Zack Birge is a guy who understands the lake and is really good at shallow-water cranking. Edwin is another to watch because of his experience here and his veteran status.”

Lawyer made it 3-for-3 on picking VanDam as one to watch for this one.

“It’s setting up to be a winding tournament and that bite will be hot,” he said. “That’s right in Kevin’s wheelhouse and it’s not going to be a tournament that’s won by fishing at a snail’s pace like the time Cliff Pace won the Classic. There’s enough shallow fish that a guy who covers water and knows the lake will be hard to beat.”