Birge Heading to Championship Round; Lefebre’s 7-Pounder Advances Him to Knockout Round 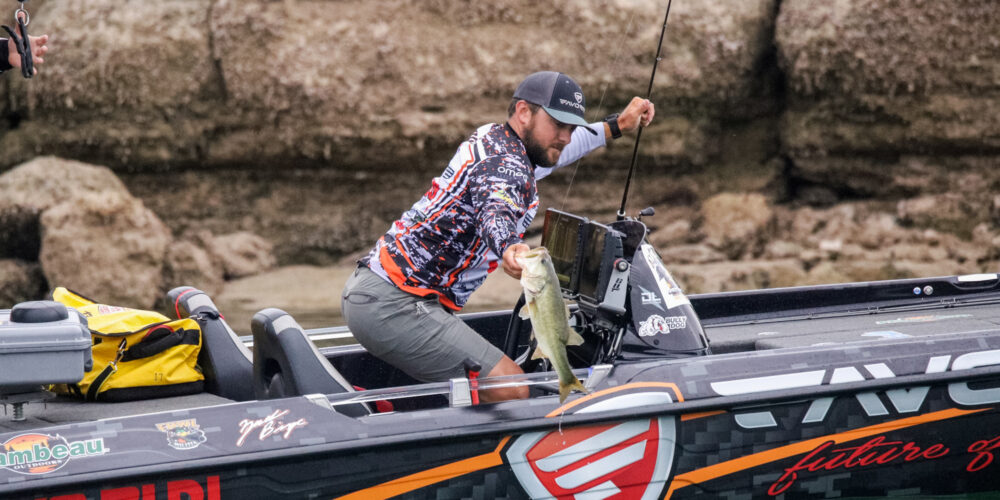 AUSTIN, Texas – Zack Birge secured his spot in the Championship Round while Dave Lefebre brought in a 7-pound monster to make a giant move up SCORETRACKER® late in the day. It was quite the entertaining day of fishing on Lake Travis for Group B’s final qualifying round of the Berkley Stage Two Presented by Mercury.

Birge Breezes Past Wheeler for Group B Win

The Oklahoma pro caught 15 bass for 25 pounds, 2 ounces on Monday, bringing his two-day total weight to 67-4 and giving him a 9-1 advantage over second-place Jacob Wheeler. While Birge admits that it was tough to get anything going during the morning hours, when the temperatures started heating up on Lake Travis, so did his afternoon bite.

“Everything went right today and I’m feeling pretty good,” Birge said. “I decided to come back down the lake for the third period and that’s the decision that got me to the Championship Round. I caught six fish in the final period fishing in an area I was comfortable. It worked out just like you want it to.”

Wheeler only managed two scorable bass for the day and was unable to catch back up to Birge once he took the lead. The Favorite Fishing pro has five Top-10 finishes since joining the Bass Pro Tour, but has yet to come away with his first MLF win. With the day off on Tuesday and time for his fish to replenish, Birge is teeming with confidence as he prepares for Wednesday’s Championship Round.

“I think I have a legitimate shot at a win this time around,” Birge said with confidence. “I don’t feel like someone is going to catch 100 pounds in the Championship Round and no one else has a shot. I think it’s going to be a shootout and I like my chances.”

Lefebre’s Lunker Sends Him to the Knockout Round

Dave Lefebre isn’t just going home with a Berkley Big Bass check, he also has a chance to earn some more money thanks to his 7-4 largemouth that helped him make the cut. The Pennsylvania pro was down near the bottom of SCORETRACKER® with time winding down in the day. It was a day full of missed opportunities according to Lefebre, but he made sure to capitalize on the best one he had.

“I had just lost what I thought was a 6-pounder, so I was praying to God to give me another big bite,” Lefebre said. “I found some isolated trees on Google Earth the night before and marked them on my Lowrance. I pulled up to them with 15 minutes to go and cast at the deepest tree in the bunch with a homemade 7/16-ounce jig with a green pumpkin Yamamoto Double Tail Grub trailer.”

Lefebre spent his evening Sunday night getting eaten by mosquitos and marking points on his Lowrance until 11 p.m. He thought by combining images from Google Earth and marking those points in his boat, it would help him get a better idea of how and where to cast to certain targets the next day.

The research Lefebre did the night before paid off in a big way. Before his jig could even get to the bottom of the lake, the 7-pounder bit it in about 25 feet of water. Once Lefebre set the hook with his 7-foot-6 medium-heavy 13 Fishing Envy rod and 8.3:1 13 Fishing Boss reel spooled with 10-pound test, he knew that he had a giant on the other end of his line.

“That fish fought for five minutes and I thought it was going to be a 10-pounder with the size of its head,” Lefebre said. “When I got it in the boat, I could tell it was so spawned out. It was still a massive fish that moved me into 18th and I was lucky enough to hang on and stay in 20th. I’m thankful to be moving on and I’m really excited to get another shot.”

Top Marks and Notes from Group B

Weights will reset to zero as the 38 advancing anglers will compete in the Knockout Round on Tuesday. The eight anglers with the most weight on SCORETRACKER® after three periods will advance to meet Birge and Brent Chapman in the Championship Round. A scorable bass must weigh at least 1 pound, 8 ounces in the Knockout Round. Partly cloudy skies and temperatures in the mid-70s are expected in the Lake Travis area for Tuesday.