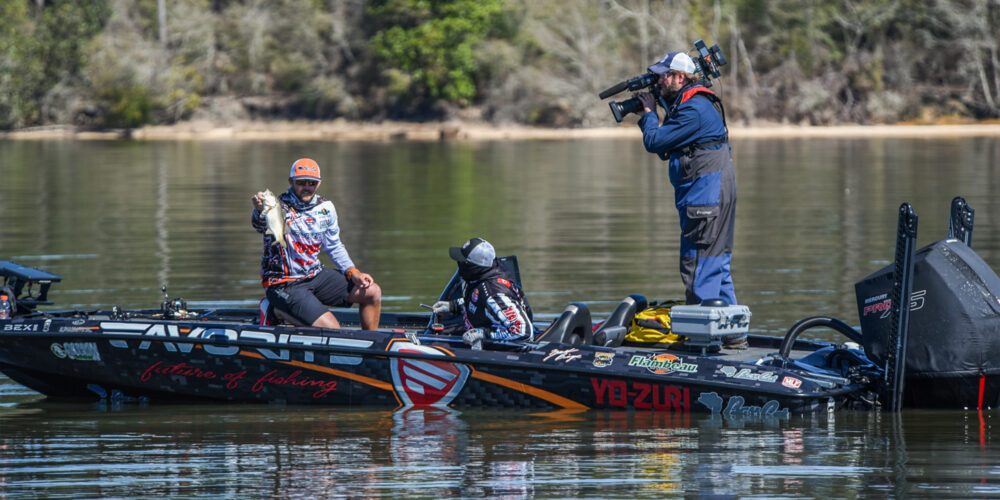 Zack Birge won the first Knockout Round after a tough day on the water for Group A. Photo by Garrick Dixon
February 24, 2021 • Tyler Brinks • Bass Pro Tour

EUFAULA, Ala.– Things are changing at REDCREST Presented by Old Wisconsin Sausage on Lake Eufaula. The most significant change is that the bass appear to be on the move from deep to shallow water. Those transitional fish proved to be tough to catch for the 10 anglers in the first of two Knockout Rounds.

Those 10 anglers managed a sum of 32 bass, but those who advanced today believe things will change for the better very soon.

The top three anglers from today had their theories on why the fishing was a challenge, but each believes things will improve or bust out wide-open in the coming days.

Birge won the round with an eight bass catch totaling 25 pounds, 14 ounces.

Birge Advances to the Championship Round

Birge finished fourth in the inaugural REDCREST on the Upper Mississippi River in 2019, and hopes to improve on that mark during Friday’s Championship Round.

His day accounted for a quarter of the fish caught during the Knockout Round.

“Today went good and I was able to catch more fish than I have any day this week so far,” Birge said. “It seemed to be much worse fishing overall, but I keep thinking it should get better and better. At some point, the fish are going to get to the bank. It hasn’t happened yet, but the bite could go off any day.”

This week, he’s targeted brushpiles with a spinnerbait on the south end of the lake. That’s his plan when he returns to the water on Friday for the Championship Round.

“I ran around again today and fished brush, including some that I found yesterday,” Birge said. “It’s going to boil down to whether or not I can get enough bites to win. I know the fish are there and it’s going to depend on whether or not they chew.”

“Yesterday was elimination day in more ways than one because all I did was eliminate water,” Connell said. “I was thankful to catch a big one yesterday to even qualify for today, but they weren’t biting shallow for me. I decided to switch it up today and go out deep.”

Today, he targeted offshore brushpiles and knew right away it was the right call.

“The first pile I pulled up on I was throwing a jerkbait and saw two come up for it on my Lowrance ActiveTarget,” Connell said. “I finally got one to bite and went from there.”

His theory on the tough fishing is that the fish are on the move.

“They’re starting to stage, but I don’t think they’re shallow yet,” he said. “They’re swimming from shallow to deep and are just not on the bank yet. The mid-depth range between 6 to 12 feet is the zone they are starting to get in.”

Connell finished the day with six bass for 17-4.

Wheeler made it look easy in his win last season, but it has been more challenging for him this time around. He made the Knockout Round by finishing the Qualifying Rounds in 15th after catching 26-4 over two days.

He ended the round with five bass for 15-2 today and has a chance to win again on Lake Eufaula.

“I was fortunate to catch some nice fish the first two days just to get here,” Wheeler said. “I’ve had to adjust every day and caught fish on different baits each day. As warm as it’s getting, it might be a buzzbait bite during the Championship Round. I’m going to keep an open mind and looking forward to a shot at $300,000.”

Like Connell, he thinks the fish are on the move and says the bite was much different than during his win last season.

“Overall, nobody has really figured out the magical stuff besides maybe Bryan Thrift,” Wheeler said. “Last year, you could catch them doing several different things. The fish aren’t anything right now as they move towards the bank. There’s a short period where they almost become uncatchable and then ‘boom,’ they are on the bank and the fishing is really good. I’m anticipating that to happen any day.”

Ten more anglers return to Lake Eufaula tomorrow for the second Knockout Rounds. They’ll try to finish inside the Top 5 to advance to the Championship Round. The conditions are forecasted to be similar to today, with highs expected to reach 75 degrees under mostly sunny skies.

Watch all three periods of competition during the MLF NOW! live stream beginning at 7:45 a.m CST on Thursday and Friday. Watch for FREE on MajorLeagueFishing.com, the MLF app, or the MyOutdoorTV app.