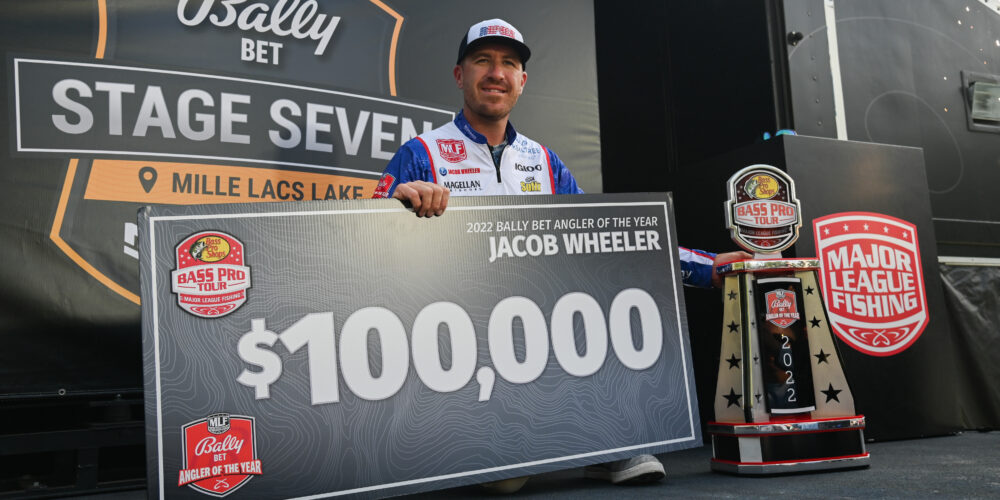 ONAMIA, Minn. – For the first time in the history of the Bass Pro Tour, there’s a back-to-back Bally Bet Angler of the Year. After clinching his spot Tuesday in the Knockout Round of the Bally Bet Stage Seven Presented by Minn Kota, defending AOY Jacob Wheeler has secured his second-straight AOY title in the final event of the 2022 season, on Mille Lacs Lake.

Wheeler showed up to Minnesota with a big lead in the AOY race, but knew that his job wasn’t finished if he wanted to assure that second-place pursuer Jordan Lee couldn’t catch him.

“I was really a mess the first day here,” Wheeler admitted. “I knew I had to catch ‘em, so I put a lot of pressure on myself. It wasn’t real to me until I hoisted the trophy. That’s when all the emotions really came out for me.”

The Year That Was

Wheeler entered Stage Seven this week with a 65-point lead over Lee in the AOY standings. That big lead came after a consistently dominant year in which Wheeler didn’t miss a Top 10 through the first six events – he still has a chance to make it a perfect 7-for-7 if he notches another Top 10 on Mille Lacs.

The Tennessee pro began the year with a seventh-place finish in Louisiana fishing three separate lakes in his four days of competition. He followed that up with a third-place finish on Lake Fork, eighth on Smith Lake, fifth on Lake of the Ozarks and then back-to-back second-place finishes on Watts Bar Lake and Cayuga Lake.

Although it may have seemed like a breeze to the average viewer, this season was far from easy for Wheeler. He fished at some lakes he didn’t have a lot of experience on, one of those being Watts Bar right in his own back yard.

“Things just didn’t make sense to me at Watts Bar,” Wheeler admitted. “I really just figured it out there on the fly. I ran 200 miles roundtrip in that first day of practice just looking for spots. I really felt like I was lost. I slowly started to put it together throughout the week, though. I was honestly just worried about making a cut and ended up almost winning the tournament. That’s when I knew I had something special happening this year.”

All over the country at different times of the year with different baits and techniques – none of that seems to matter. The constant is Wheeler. Although he hasn’t yet come away with a win in 2022, he remains the winningest angler in Bass Pro Tour history with five event wins. His six Top-10 finishes this season are the most ever in a single Bass Pro Tour season. He’s also collected more than $202,000 in winnings in 2022.

Ask anyone on tour and they’ll tell you no one puts in the work like Wheeler. It’s long days and nights on the road away from family (his wife Alicia and two young children). But that’s what Wheeler signed up for. He knows what it takes to get to the mountain top, but he’s not sure that everyone watching does.

“I think a lot of young anglers look at what I’ve accomplished and think, ‘Wow that would be awesome to do one day,’” Wheeler said. “It is awesome, but you have to constantly be grinding. I drove 16 hours this year to practice on Cayuga for a day and a half, then immediately drive back home 16 hours so I could be with my family. You have to make fishing a priority if you’re going to make this happen. I put everything I had into this season because I had to so I could be where I am now.”

He’s now a 32-year-old tournament veteran chasing his professional fishing dreams. But he started out just a young kid from Indiana who loved to fish. Not a lot of bass fishing gets done in Indiana, especially at the level he’s fishing now. That just goes to show how far he’s come.

“I was a kid from Indianapolis, Indiana,” Wheeler chuckled with his trophy and $100,000 check in hand. “If I can do it, anyone can do it. God has blessed me in so many different ways.”

Andy Morgan knows what Wheeler has gone through winning back-to-back AOYs, having done it himself in 2013 and 2014 on the FLW Tour. He says to stay at the top all year long, you have to be much more than just consistent.

“You have to be so freaking relentless,” Morgan said. “Jacob is relentless, and that’s what it requires. You can sometimes get caught focusing on your yearly average finish, and that does you no good. You have to do the best you can do every second of every tournament. Don’t focus on the big picture until the season is over, and that’s what Jacob’s done.”

Kevin VanDam is widely considered the best professional bass angler ever, having won eight AOY titles, including four in a row from 2008 to 2011. VanDam sees a lot of himself in Wheeler, and coming from VanDam, that’s saying a lot.

“I know all the stress and hard work that it’s taken for Jacob to get where he is,” VanDam said. “He has a very similar style to me, I think. He’s very efficient, he fishes fast and he’s good with his electronics. He doesn’t doddle around when something isn’t working, he quickly makes a change.”

But it’s not just about the performance on the water that makes Wheeler great, according to VanDam. It’s the work that Wheeler does in the offseason and during his time away from tournaments that separates him from the rest of the field.

“He really puts the work in,” VanDam said. “I don’t think people know or understand how much time he spends on the water. He pre-fishes for pretty much every event, and that gives him a big advantage over a lot of the field. Like when we went to Louisiana this year. There were three different lakes we fished, and I guarantee you he felt comfortable at all of them because he spent time on all three. The majority of guys don’t do that.”

Morgan has a unique perspective on Wheeler thanks to time spent with him away from fishing. Morgan mentions it’s not just Wheeler’s fishing acumen that makes him great, it’s his mental makeup that drives him for greatness.

“I take Jacob turkey hunting several times each year,” Morgan said. “If I tell Jacob to get to the house at 4 a.m., he’s there 10 minutes early with a cup of coffee and ready to go already putting stuff in the truck. He’s always prepared, no matter what the situation is. You don’t wait on Jacob, he wastes no time. He uses all of his time to pursue whatever he’s chasing.”