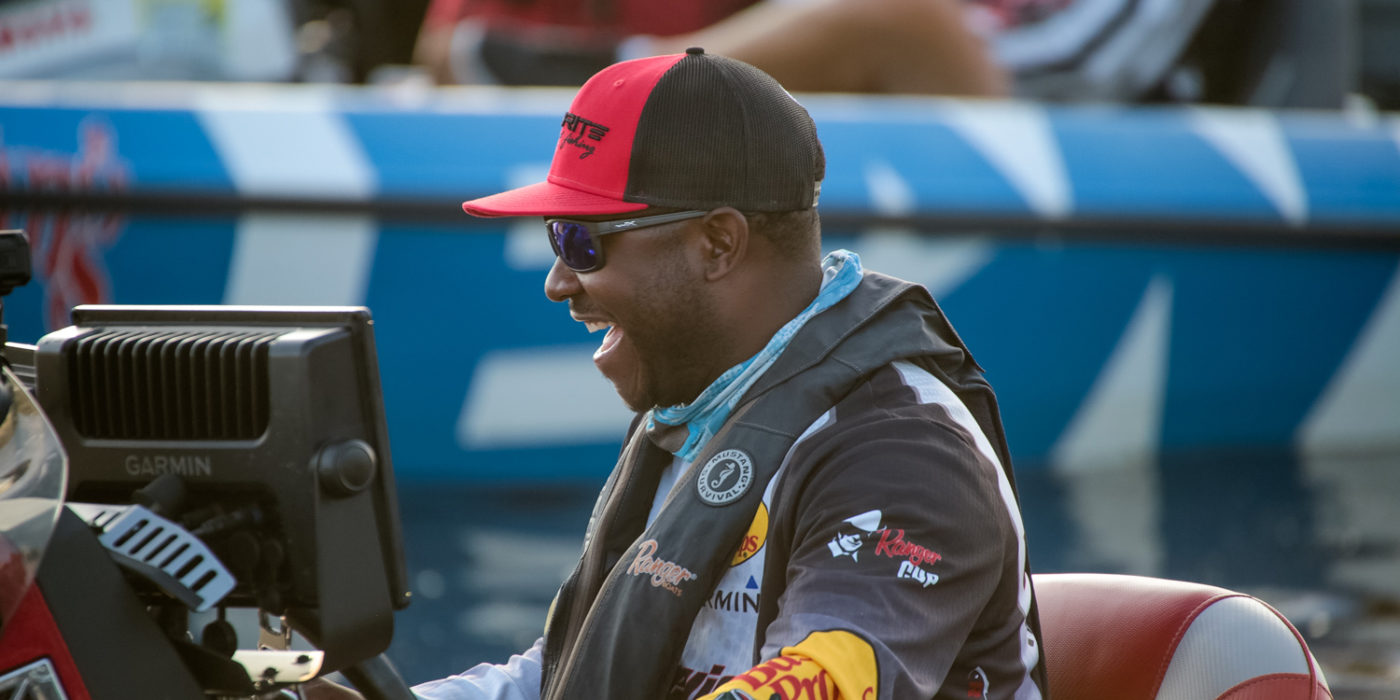 Mark Daniels, Jr. clinched a spot in the REDCREST Championship thanks to his performance in Saturday's Knockout Round. Photo by Phoenix Moore

NEENAH, Wis. – The race for REDCREST qualification and a Evinrude Stage Eight Presented by Tracker Off Road championship shifted from Lake Winnebago to Lake Butte des Morts for the Knockout Round. Forty pros took to the water, 11 of which were hoping to qualify for just four vacant spots in the Top 30 of the REDCREST point standings.

Daniels Had a Day

Daniels had the best finish of the three pros, clinching a 12th-place finish and cementing his name in the REDCREST field. The Alabama pro began his week six spots below the Qualification Line, and his one goal was to finish his season inside the Top 30.

“It’s just a really good feeling because that’s what I set out this week to do,” Daniels expressed. “I threw a new signature squarebill crankbait that I’m coming out with at ICAST that I caught a bunch of fish on today. It’s always that much more gratifying when you catch them on something you helped design. I’m just really happy.”

Although Daniels was unable to move on to the Championship Round of Stage Eight by just 1 pound, 14 ounces, he’s not dwelling on any negatives thanks to knowing he now has a shot to come home with his own title this postseason.

“It’s the biggest silver lining you can have without a shadow of a doubt,” Daniels explained. “To get the job done in the very last tournament, it’s just a feather in my cap. The stress can eat you up in MLF because it’s so tough. It was a special day and I can’t complain at all.”

Meyer knew coming into Stage Eight that he had some work to do as he was in 30th place in the point standings. When the California pro found himself near the bottom of the pack in the third period of the Knockout Round, he began to feel the heat.

“I wasn’t really fishing under stress, but man, I was stressed,” Meyer said after his Knockout Round. “I just could not figure out how to catch them and I knew other guys had figured it out. I saw the dream of qualifying for the first REDCREST slip through my fingers. Then at the end of the day, I was able to find some clear water, catch six fish and that was the difference for me.”

Meyer finished in 27th place in the Knockout Round, four spots higher than he needed, to clinch a berth in the first-ever REDCREST Championship. The points the Daiwa pro earned in Stage Eight gives him a 29th-place finish overall in the point standings, just nine points ahead of 31st-place Randy Howell. Meyer isn’t concerned with where he finished in the race, he’s just glad he’s one of the thirty.

“This was so hard because this group of 80 guys is just so good,” Meyer complimented. “They’re all talented and consistent, so to have the finish I needed to make it is just incredible. I didn’t make it easy on myself because I have less hair on my head and more gray hair, but it really feels good.”

Randall Tharp had a long way to go toward REDCREST qualification when the Knockout Round began on Saturday morning. The “Honey Badger” sat in 38th-place in the point standings coming into Stage Eight and knew he was going to need a 14th-place finish or better if he wanted to drive his rig back to America’s Dairyland in late August.

The Rapala pro had a solid year, qualifying for five out of eight Knockout Round in the Bass Pro Tour season including a Top-10 finish in Stage Two. For everything that Tharp has endured this season, he knew how much it would have stung to fall just short of the REDCREST.

“It would have really stunk to miss out on the REDCREST after the year I’ve had,” Tharp admitted. “One bad period can really haunt you in MLF and it’s what put me in this position. You look at a guy like Edwin Evers, he didn’t have any bad periods all season. He was solid all year long and that’s what it takes. I wish I hadn’t put myself in this position to barely make it in, but I’m happy to have made it.”

The Florida pro edged out Randy Howell by six points to qualify for the inaugural REDCREST Championship. Tharp is not only excited to compete against the Top 30 pros on tour, but also to return to a place where he’s had success in the past.

“La Crosse is really special to me,” Tharp revealed when given the news he qualified for the REDCREST. “I’ve had two really good events there so having a championship event on a lake that really suits you is awesome.”