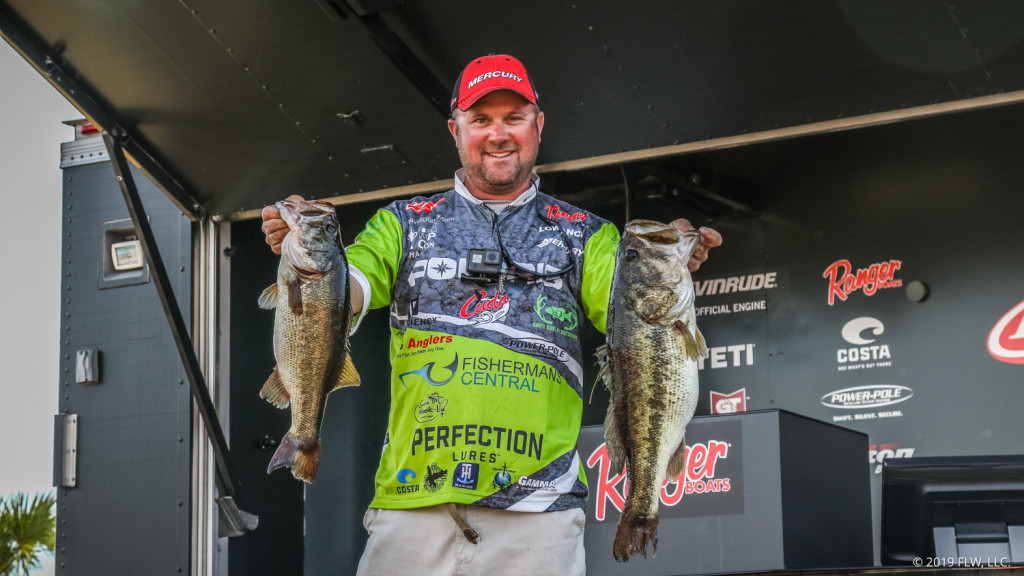 Four-time FLW Angler of the Year David Dudley is "chomping at the bit" to fish the MLF Bass Pro Tour in 2020. Photo by Kyle Wood

Reading down a list of the professional fishing achievements of new MLF pro David Dudley, one would think they were poring over a scorecard for a Hall of Fame induction ceremony.

Dudley is a four-time FLW Tour Angler of the Year winner (2008, 2011, 2012, 2019), the only angler in FLW history to achieve that honor four times. He’s claimed $3.8 million in career FLW winnings, the most in FLW history. The Virginia pro is, by all standards, one of the most successful tournament bass fishermen in the world.

But in 2020, David Dudley will be fishing with “healthy fear” as he takes his roster spot on the MLF Bass Pro Tour.

“I’m excitedly nervous,” Dudley admitted shortly after it was announced that he and fellow FLW superstar Bryan Thrift had accepted invitations to join the MLF roster. “I’m opening up a new chapter in my book, so to speak.”

It’s a chapter that follows one of the most successful in Dudley’s 26-year professional career. Not only did Dudley outpace John Cox by 20 points to win the 2019 FLW AOY title, he collected two Top 10s and banked $181,000 in winnings, his second-highest total in 24 years on the FLW Tour. He was (in his own words) “focused and hungry” in a way that he hadn’t been since he won back-to-back AOY titles in 2011 and 2012.

“I admit flat out that I got pretty complacent in 2013,” Dudley said. “You have healthy fear and unhealthy fear, and I didn’t have that healthy fear anymore. I mean, I wasn’t fishing bad: I had some Top 10s, I made it to several championships, but my kids kept telling me ‘You haven’t won a tournament in six years, Dad’ and that burned me up. My kids are smack-talking their own dad! I had to refocus on the things that were holding me back.”

Dudley fished well during the first half of the 2019 FLW Tour season, but then caught fire down the stretch, finishing 12th, fifth and seventh in the last three regular-season tournaments of the year to catapult himself from outside the Top 10 to the AOY title.

It’s that exact focused and hungry mindset that the Virginia pro insists he’ll bring into the Bass Pro Tour.

“I’m nervous about the Bass Pro Tour in the kind of way that makes you fish harder and more focused,” Dudley said. “I look back at my career as a bass fisherman and I can admit that I’m a goal-oriented fisherman. The AOYS and championship titles are great – I won an FLW Championship, and heck, I even have an Ultimate Match Fishing title – but in making the decision to fish the Bass Pro Tour, I had to look at what’s going to motivate me to strive to be the best in my career.”

Looking Forward to the MLF Format

Dudley is “chomping at the bit” to fish a 2020 Bass Pro Tour schedule that includes two lakes he’s won on before (Lake Okeechobee and Lake Champlain) and a lineup of fisheries where he’s collected nearly a quarter of his 44 FLW Top 10s. He’s even more anxious to compete in the MLF format, which he says suits his fishing style perfectly.

The 2020 Bass Pro Tour opener on Lake Eufaula, Alabama, will mark the first time since January of 1997 that Dudley won’t be starting a season under the FLW flag, a career-changing decision that he didn’t take lightly.

“If you cut me, I bleed FLW,” Dudley admitted. “I really appreciate everything they’ve done for my career, but I’m at a point in my career where I have an opportunity to go a couple of different directions. When you have an option, you have to look at where an organization is heading. Are they looking to expand the anglers’ professional career? Are they looking to expand (to) ‘Hey, how can we make this world love fishing more?’