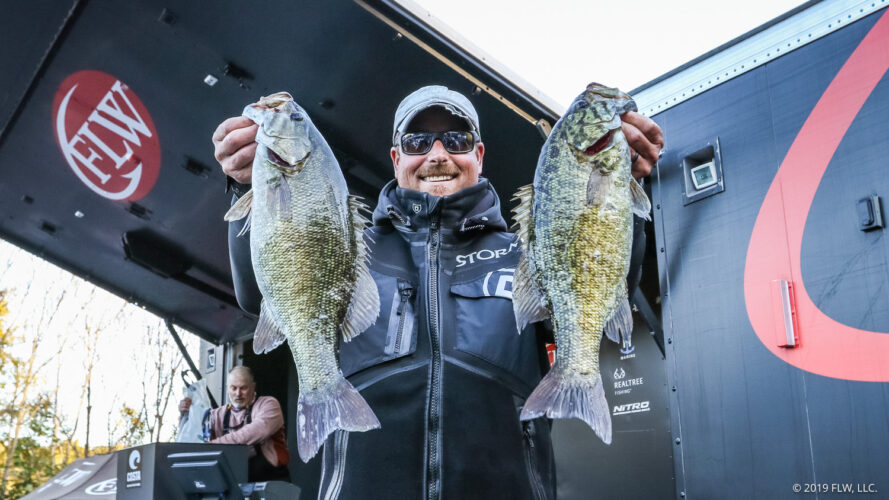 Bryan Thrift is one of two newcomers to the Bass Pro Tour this season along with David Dudley. Photo by Kyle Wood
February 5, 2020 • Mason Prince • Bass Pro Tour

EUFAULA, Ala. – It’s been a long winter, but the start of the 2020 Bass Pro Tour season is finally just days away. When the MLF Bass Pro Tour opens up the 2020 campaign on Lake Eufaula, Alabama on Friday, two new names will be part of the 80-man roster: David Dudley and Bryan Thrift.

The two begin their MLF experience after completing two of the most lucrative and successful careers in FLW history.

Thrift Ready for the Shift to MLF

Thrift enters 2020 after a record-setting season on the FLW circuit in 2019. The North Carolina pro took home the 2019 FLW Cup, nabbed eight Top-10 finishes, and collected more than $520,000 in winnings in the most lucrative season of his career. As he moves on to the new challenge that the Bass Pro Tour presents, Thrift will measure his success in 2020 the same way he always has.

“I’ve always measured my success by getting paid,” Thrift explained. “This is my livelihood, so if I’m able to make cuts and keep getting paid, that’s how I determine if I had a good year.”

Thrift admits that he has had zero experience with the MLF catch, weigh, immediate-release format, but that’s not at the forefront of his mind as the season approaches. Thrift says he’s excited to not only begin the new year, but to start this new phase of his career with a few anglers that he started his career with many years ago.

“This is going to be a new format and experience for me, but I’m going into this season like I have every year of my career,” Thrift said. “I love the whole process of preparing for an event and gearing up for the season. I’m really looking forward to seeing all the guys on tour and getting to be back around friends. I was a rookie with Ott DeFoe, Andy Montgomery and Casey Ashley, so to be back competing with those guys is going to be the best part.”

David Dudley may be a rookie on the Bass Pro Tour, but his name will command respect no matter where he puts his boat in the water. The Virginia pro is the only angler to ever win the FLW Tour Angler of the Year award four times (2008, 2011, 2012, 2019) and has collected nearly $4.1 million in winnings over his 25-year career. For the first time, Dudley will make the switch to the MLF format, a challenge he’s certainly up for facing head-on.

“I’m going to have to practice differently than I ever have,” Dudley said. “In the past, if I had a big five-fish limit, I was just casually fishing throughout the rest of my day. In this format, you can’t let up on the throttle at all.”

Dudley has seen what happens to anglers who let up on the Bass Pro Tour. The Virginia angler says that he, much like Thrift, measures his success by cutting checks and making cuts. While wins are the ultimate goal, Dudley says that this season is really about figuring out how to adjust his fishing style while also trusting his gut.

“This is basically a chess game,” Dudley said. “I have to learn how to play this game and figure out which moves are the right moves to make at the right time. I’m excited to be learning a new game at this stage of my career. How quickly I learn this new game remains to be seen, but I’m ready to figure it out.”

Thrift and Dudley will join the 78 other pros competing in the B&W Trailer Hitches Stage One Presented by Power-Pole from Lake Eufaula, Alabama. MLF NOW! live stream coverage begins on Friday, Feb. 7 on MajorLeagueFishing.com and the MLF app.