DUSTIN CONNELL: Nothing Left But Tears

Reliving the Final Day of REDCREST 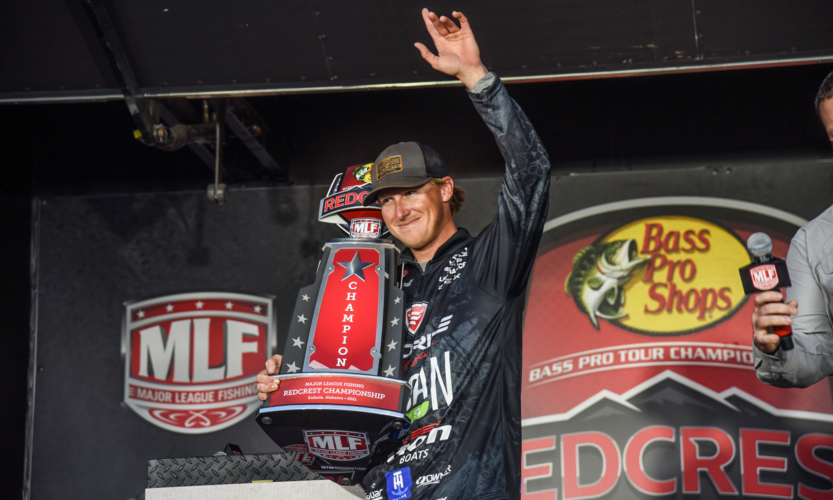 Now that I’m back home with a REDCREST trophy, I’ve had a few days to process what happened last week at Lake Eufaula. With that, I want to share some special moments from my final day that I couldn’t explain when they happened.

I remember much of my final day at REDCREST with clarity. I was solid as a rock right up until the last 20 minutes. At that point, the whole day, the whole week, and really, the last 15 years of my life in this sport, all caught up to me at one time.

You guys watching on the live stream couldn’t see what was happening to me, but I was straight up having a mental, physical and emotional “come-apart” all at once in those closing minutes of REDCREST. Even before lines out, my eyes were so full of tears, I couldn’t even see my graphs. As the final minutes ticked off the clock, I was an absolute wreck. I couldn’t think straight, I couldn’t find my piles on my graph, I couldn’t even cast.

Every fiber of my being was completely cashed out. I had nothing left in me – at all.

When the “lines out” call was made and I was declared the winner, I had no idea that I was going to start bawling my brains out like I did. At that point, I don’t really remember anything. I became overwhelmed with all of it: the hundreds and hundreds of days on the water no one sees, fishing in every kind of weather just to learn on my own, all of the terrible finishes in tournaments that left me wondering if I was ever going to succeed, all of the hundreds of lonely hours when I drove through the night after a bad finish, trying to figure out what the heck I did wrong and all of the amazing support I have from my wife, family, friends and fans who were there to cheer me up when I was at rock bottom.

Some people might not understand the sacrifices that it takes to fish at this level – it’s not a normal life. You spend thousands of hours on the water chasing something no one can really see while other people are doing fun stuff. All of it hit me like a tornado in that moment and it all came out.

Part of all that raw emotion also came from the fact that I had just fished the most magical day of my fishing career. Words cannot describe what I felt that day, but I’ll try.

It started with the first brushpile I fished that final morning; I threw a jig in it and caught a scorable bass. The next cast I made was with a regular-billed suspending jerkbait. On that very cast, I watched on ActiveTarget as a bass came up out of the pile and crushed my jerkbait. That bass wasn’t even scorable, but at that exact second, I suddenly snapped into one of the most peaceful calms I have ever felt during a tournament.

That single bite told me everything I needed to do the rest of the day. I was so convinced of it that I actually cut off the jerkbait that I just caught a fish on and tied on a deeper-diving jerkbait that would get down to the tops of the piles more efficiently.

I know my boat official and camera guy must have thought I was crazy. I just caught two fish one on a jig and one on a jerkbait – then proceeded to put them both away and tie on a completely different bait!

But there was a reason for it.

What most people might not know is fishing brushpiles with a jerkbait is something I’ve honed at home for many years. It’s a very specific technique with a small window, which is why a lot of people aren’t familiar with it. But when that bite sets up right, it’s so strong, I can call my shots with it. And that’s where the overwhelming confidence stemmed from that day; it created a calm in me I’ve never felt before – everything totally made sense at that moment.

All the questioning and wanting to try something else that usually comes with fishing just fell away. There was no struggling with decisions anymore, every part of me knew exactly where I was going to go and exactly how I was going to fish.

The Calm Before the Storm

The weirdest part about the rest of that day was that there was no longer any sense of urgency, which is so dang odd for me! Anyone who knows me and the way I fish, I’m always in a hurry – to the point of being frantic – I’m always thinking about the next place I want to fish while I’m fishing the place I’m on. It’s something that sometimes spins me out on the final days of events. But this time, it was different. I knew I didn’t have many piles to fish, so I was forced to take my time and fish the ones I did have correctly.

If I had one word to describe my fishing that day it would be “fluid” – everything just clicked and flowed naturally – I was never rushed. It’s so weird because I felt like I had all the time in the world. Something just told me if I took the time to execute properly on every brushpile I had, I would be just fine.

I took my time setting up on all my piles. I cut the engine from a long way out. I trolled slowly and quietly into position. I wouldn’t even cast until I was in the exact right position. Once I got the lure to the pile and saw the fish coming up to get it on ActiveTarget, I knew I was on the right deal. Each time that happened and I caught one, my trust in the process grew bigger. All day, that cycle fed on itself and propelled me to a place I had never been.

Coming Back Down to Earth

For much of the day, I felt like I was in a different place than everyone else. At one point, I had gained a 13-pound lead on the field. There was trust in what I was doing, with no pressure; I felt free in a way that’s hard to describe.

My first wake-up call from this dream-like day came with about an hour to go, when Wheeler started to make a push. The re-entry back to reality had begun. Internally, I was still solid, though. I remember thinking, “I love you like a brother Jacob, but today is my day!”

Then Michael Neal started cutting into my lead. And given the way he snared Edwin and Fletcher in the final minutes of the previous days, that really started to burn me back into reality. In that last 20 minutes, it was like re-entering the atmosphere to the gravity of the moment and it burned me down to my core.

When I collapsed on that deck at lines out, the tears that came out of my eyes were all I had left.