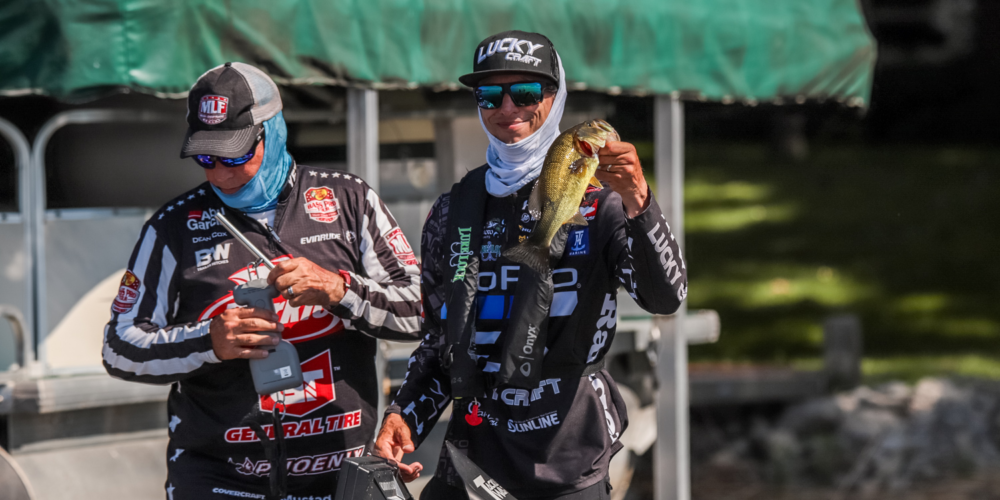 NEENAH, Wis. – As the competition switched to a new lake today for the Knockout Round of the Evinrude Stage Eight Presented by Tracker Off Road, Brent Ehrler figured it out better than anyone and ran away with a convincing daily victory.

Lake Butte des Morts proved to be a nice change of pace for the anglers after four days of fishing Lake Winnebago. This new, smaller lake produced good numbers of fish, several 3-plus-pound specimens, and all-day action on SCORETRACKER®.

Tomorrow, the field will again try their best to tackle another new body of water as the tournament concludes on nearby Green Lake for the Championship Round.

In the final 15 minutes of Period 3, Ehrler landed his biggest bass of the day. The 3-11 largemouth caught on a frog was the exclamation point on a stellar outing.

“Today was a blast! It was stressful, but still so much fun,” he said.

The majority of Ehrler’s fish fell for a frog, but he also landed several key fish on a Gary Yamamoto Senko. He spent much of his day in a backwater area that was full of grass, submerged trees, and hungry largemouth bass.

He grabbed the lead midway through the day and never let go. Ehrler ended the Knockout Round with 28 bass for 56 pounds, 7 ounces, outdistancing second-place finisher Bobby Lane by over 13 pounds. Lane finished with 42-10.

As Major League Fishing fans watched MLF NOW! live stream today, there was no mention of Gary Klein until late in the final period as he was buried deep in the standings. But at the 1:10 mark in Period 3, Klein picked up momentum and found himself in 15th place. When it was all said and done, the Mercury pro finished in 8th place with 18 bass for 30-5.

For most of the day, it appeared that Jacob Wheeler would not be present on Championship Sunday to try for back-to-back wins. But, he found another gear late in the round and was able to sneak into the Top 10 and finish in 9th place.

His day totals were 17 bass for 28-3. With weights starting at zero tomorrow, Wheeler has a new life and must be considered one of the favorites to win.

Fred Roumbanis started the day strong thanks to a solid smallmouth bite on a vibrating jig. His morning bite was excellent, but his afternoon stalled as he continued to slide down the standings.

In the end, he was the first angler out of the Top 10 but took it in stride despite missing the cut by just ten ounces.

“Boy, I let that one slip out of my fingers. It just wasn’t meant to be this week, but at least I qualified for the final Cup and REDCREST,” he said as time expired and he accepted his fate in Wisconsin.

After yesterday, our estimated calculations had 10 anglers vying for just four spots. Still, nothing is set in stone until the last fish is weighed tomorrow.

For now, it appears that Randall Tharp, Mark Daniels, Jr., Takahiro Omori, and Cody Meyer have done what they needed to do this week to make REDCREST.

Official results will be tabulated at the close of tomorrow’s competition.

The Elimination Round will be Green Lake, which is approximately 45 minutes outside of Neenah, WI. The weather forecast calls for scattered thunderstorms, a high of 83-degrees and winds out of the south at 5 to 10 miles per hour.

Competition continues on Sunday at 7 a.m. CT, with live, official scoring available via SCORETRACKER® on MajorLeagueFishing.com and on the MLF app. The MLF NOW! live stream begins at 9:30 a.m. CT with Chad McKee, JT Kenney, Marty Stone, and Natalie Dillon.

The Postgame Show Presented by Berkley will begin at approximately 4:30 p.m CT. If you’re in the area, come see us at Shattuck Middle School in Neenah.