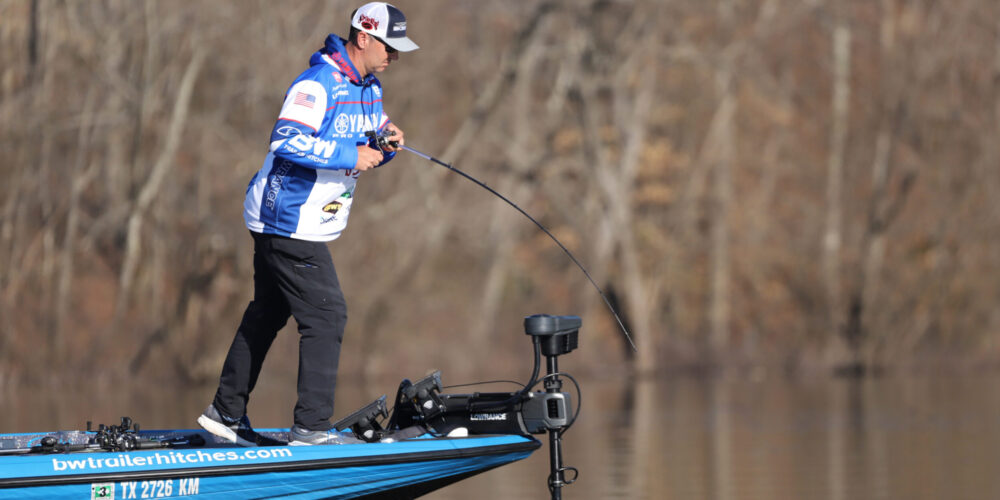 CULLMAN, Ala. – Ten minutes into the second day of competition at Favorite Fishing Stage Three Presented by Mercury, Texas pro Todd Faircloth had already caught two bass and took over the lead from a handful of other anglers already on the board. It was a fast start, but on a fishery like Smith Lake – where 20-fish days are common – a fast start isn’t always a guarantee that your name will be in the No. 1 spot at the end of the day.

But, Faircloth maintained the lead all day. Although a handful of anglers made runs to get close, the Texan’s fast start kept him at the top of the standings. Faircloth tallied 18 spotted bass for 36 pounds, 10 ounces to take the group’s lead of 4-13 over Stage Two winner Alton Jones Jr.

Faircloth’s first period included 12 bass for 25-9, all of which came from one part of Smith Lake. He stayed in that area until the bite died and then moved to another spot (with limited success).

“I went back out towards the main lake and wasn’t getting the same number of bites,” Faircloth said. “I caught some short fish and saw fish on my Lowrance ActiveTarget, but it just didn’t happen.”

Faircloth returned to his primary area late in the day and didn’t have the same results as the morning flurry, which made him slightly uneasy about the rest of the event.

“I’m a little concerned going into my next day of fishing, but I have a lot of other water I haven’t hit yet if my main area doesn’t work out,” he said.

Faircloth’s strong morning came on a variety of from Strike King, a crankbait, jerkbait, and finesse worm, mixing it up to stay with the bite.

“I started out of the gate with a Strike King 1.5 Flat Side then caught about the same number on a jerkbait,” he said. “Then I slowed down with a finesse worm. It was all on one specific spot and you have to keep changing baits to give them a different look and trigger the school to bite again.”

Fresh off of his win at Lake Fork, Jones is back at it and finished the day in second place. It didn’t start fast for Jones, as he had just one scoreable bass in the first period.

“Not too bad considering my start this morning,” he said. “I’m pretty excited to be in the position I’m in after the day.”

Jones caught 14 bass for 31-13 and feels that he figured something out later in the day and hopes to carry that into the rest of the event.

“The first period, I bounced around a lot and didn’t land on them,” he said. “I feel like the area I ended up in has the potential to win the round when we come back out here on Saturday.”

With highs in the mid-70s, Day 2 was a pleasant day for fishing (although slow to develop). A handful of anglers spent the morning placing multiple bass on SCORETRACKER®, but the action heated up as the day went on and the fishing in the final period was great. This bodes well for the rest of the week as the weather continues to warm into the high 70s.

Smith Lake is also stabilizing and cleaning up by the hour after the recent rainfall and rising water before the tournament, which should also help to improve the overall quality of the fishing.

Weights on Day 2 were similar to Day 1, with 10 anglers over 20 pounds versus nine on Wednesday. The current Toro Cut Line weight was slightly higher at 12 pounds 14 ounces compared to 11-5 yesterday.

Group B returns to the lake Saturday with another sunny day on tap. The 40 anglers in the group will battle it out to see who will jump straight to the Championship Round and also who gets to advance to the Knockout Round.

Action kicks off at 8 a.m. CST. Live coverage of the third day of Favorite Fishing Stage Three Presented by Mercury starts at 7:45 a.m. CT on the MLF NOW! live stream. Watch for free on MajorLeagueFishing.com, the MLF app, or the MyOutdoorTV app.