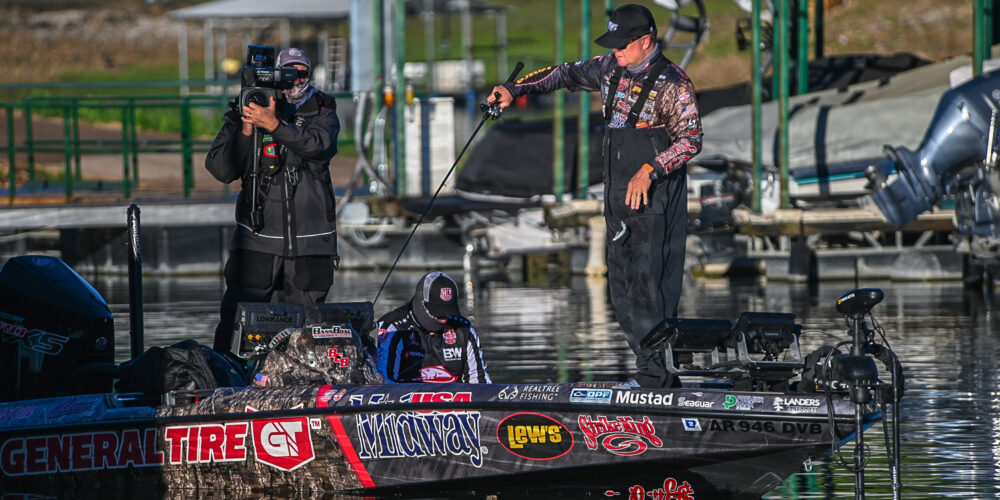 AUSTIN, Texas – It was moving day for Group A at the Berkley Stage Two Presented by Mercury on Lake Travis. With weights tightly packed together on SCORETRACKER®, it was a fight to the finish. In total, three anglers moved in and three moved out.

Aside from the standings, there were plenty of other exciting stories from the day. Here are five key things from Group B’s Qualifying Round.

The biggest mover upwards was Tackle Warehouse Pro Circuit angler Miles Burghoff, who jumped 14 spots and survived to compete in the Knockout Round.

Who will be the biggest mover when Group B returns to the water?

The northern section of Lake Travis is more riverine than the lower section, and the water is pumping right now. After the storms that shortened the fishing day for Group B, a large amount of rain drained into the lake via the Colorado River. This created plenty of current and dirtier water throughout the northern section, and several anglers exploited the excellent bite.

The question is who decides to fish the area tomorrow and if the bite continues to improve in these areas.

Once again, the weather is a story as Sunday’s sunny skies were a drastic change from the previous days’ overcast, stormy conditions. Sunday’s anglers were also assisted with some afternoon wind and consistent weekend boat traffic helped to stir up the clear Lake Travis waters.

Group B will hit the water Monday with even warmer conditions featuring 90-degree temperatures and less wind in the forecast. They likely won’t see as many boat wakes to help the bite. Will the bite get better or worse on Monday?

It’s a fairly even mix of anglers fishing quickly with reaction baits on baitcast gear and those sticking to light line on spinning gear. Both are producing plenty of bites, but one method is sure to win out.

There were also countless fish broken off today with finesse fishing tactics as the zebra mussels in the lake have wreaked havoc on anglers’ light fishing line. Lost fish made a difference to some anglers today and stood between anglers advancing or not.

The first three days on Travis have been consistent, with daily catch rates of 243, 236, and 219 bass, respectively. The numbers also show a slight downtrend, but that stat may be misleading as some top anglers let off of the gas today when Brent Chapman‘s lead became out of reach.

The question that remains is how the fishing quality will be as the weather changes and the fishing pressure from the Bass Pro Tour anglers continues to take its toll on the fishery.