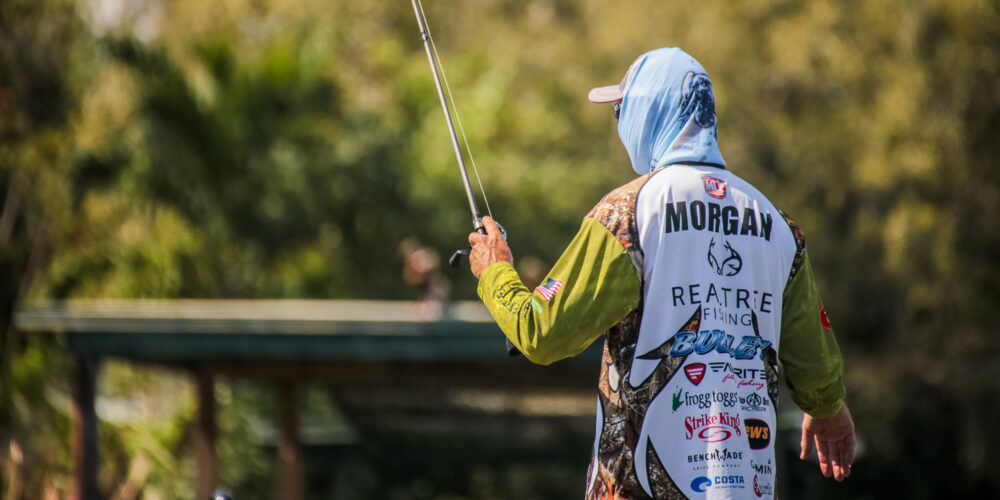 Andy Morgan shares the history of flat-sided crankbaits and what he's got in the works. Photo by Phoenix Moore
January 12, 2021 • Mike Pehanich • Bass Pro Tour

Tournament fishing dominates the outdoor news today. But lure makers and their trail-blazing creations continue to provide the kind of colorful backstories that capture an angler’s heart and soul.

As a top-level performer in the elite ranks of Major League Fishing – with deep roots in eastern Tennessee angling tradition – Andy Morgan approaches the sport with a solid foot in each realm. He’s an astoundingly successful tournament fisherman, but he loves and appreciates the history of the tools that he uses in his job.

Morgan recalls that flat-sides had a prized place in his lure locker by the time he had reached his early 20s.

“The first guy I knew to make hand-carved baits was John Morrow who carved the first Big O’s right here in eastern Tennessee,” Morgan says. “That hand-carved Big O became a pretty famous plug. Guys then grabbed ahold of that concept and started carving a lot of different baits. Eventually those efforts rolled around to a flat-sided bait.”

One of those lure craftsman was a fellow Morgan remembers as “Pete.”

“We all called his bait a ‘Petey,’” says Morgan. “It was a round-lip, flat-sided plug, and we won our share of tournaments on that bait. At certain times of the year, you couldn’t beat guys fishing with a Little Petey. They weren’t easy to find, either. It was like getting moonshine. You had to go way up the holler to find these baits, and you had to have ‘relations’ to get ‘em. They were like underground crankbaits, and for three- or four-week runs in the season you could not beat a guy fishing a Petey.”

There seemed to be magic in those “living” baits extracted from wood. Most were carved from balsa.

“Balsa has great action, and it gave you the wobble you wanted,” Morgan says. “It’s super-light in weight, and you could manipulate the bill — they all had that circuit board-type lip — to get more wobble or less wobble. And these guys could really refine it. They could get things perfect. They knew exactly what they needed to do to get what you wanted your bait to do.”

Of course, balsa baits had their own limitations. Their light weight made them difficult to cast. Many anglers threw them on spinning tackle, opting to sacrifice casting accuracy for the sake of needed distance. Adding larger hooks or adding weight to the wood sometimes helped, but the lure makers hunted for better solutions.

At certain times of the year, you couldn’t beat guys fishing with a Little Petey. They weren’t easy to find, either. It was like getting moonshine. You had to go way up the holler to find these baits, and you had to have ‘relations’ to get ‘em.

Heavier wood made sense. Cedar provided one option; basswood another.

“Basswood was like balsa, but it had more weight to it,” says Morgan. “It gave you better ‘castabality.’ But going with heavier wood proved to be another way to change the action of the lure. The heavier the wood, the tighter the wobble. You could drive that bait a little deeper and tighten the wobble with heavier wood.”

Morgan relied on local lure carver Marion Tipton, who had worked with Morrow making early Big O’s, for his custom crankbaits. That included all his flat-sides.

“He made them only from balsa, and he literally carved them with a pocket knife,” says Morgan wistfully. “A lot of people don’t realize that many of those baits were carved by guys sitting in an evening chair, watching the evening news.”

Refinement of the flat-side continued, and Morgan helped shape its evolution.

One March, cold rains and high waters prevailed. He sought a bait with a hard wobble to grab the attention of reluctant bass swimming in dirty water.

“We came up with a flat-side a little wider than the typical ‘Petey’ and a tad bit shorter, but it still had that circuit board lip,” says Morgan. “We called it a ‘Twenty-Four’ because we went out and fished a tournament and got a 24-pound stringer on it. From then on, it was the ‘Twenty-Four.”

Over time, Morgan had assembled an arsenal of carefully selected “specialty” baits.

“You would have several baits to do different things but always four or five of each type,” he says. “We fished them mostly 2- to 8-feet deep. You could get early ones to get 8 feet down on a long cast with 10-pound line. That was with a tighter wiggle bait, a specialty flat-side.”

Morgan believes commercial brand flat-sided crankbaits have yet to compete with the hand-carved creations of those pioneering craftsmen of eastern Tennessee.

But he hopes to have a hand in changing that side of lure-making history as well.

“I’m working on one now,” he says. “We’re going to replicate the ‘Twenty-Four’ and make it with plastic. We’ll really have to be careful with the weight and the angle of the bill and all the critical details. But I’m pretty sure we can get it really close — and make it castable.

“I don’t really like using spinning gear with a crankbait. I can’t make as many casts a day, and I’m not nearly as accurate with a spinning rod. It might not make much difference when you’re fishing the edge of a flat, but if you are fishing a shoreline with stumps, that accuracy is important.”

What lure maker is he working with?

Morgan seems as excited about the prospect of resurrecting a lure category as setting a milestone.

“Flat-sided crankbaits were hot for years, then they went away,” he says. “I still have some, and I wouldn’t take $100 apiece for any of them. They were really good!”